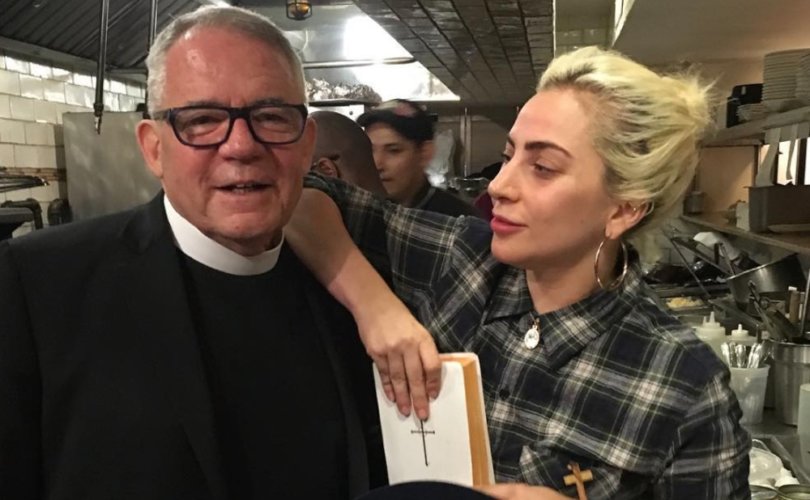 NEW YORK, July 8, 2019 (LifeSiteNews) – The priest at the helm of an LGBT-affirming parish in New York who told a potential seminarian to lie to Church leadership about his sexuality has been suspended from ministry after a canonical penal process found him guilty of serial sexual misconduct.

A spokesman for the Archdiocese of New York told Catholic News Agency (CNA) over the weekend that Father John Duffell had been found guilty of the canonical crime of sexual misconduct resulting from an administrative penal process conducted by the archdiocese, and that the suspension is indefinite.

A source close to Duffell told CNA the allegation concerned serial misconduct over a period of some years, the report said.

The news came to parishioners of New York’s Blessed Sacrament Parish in a July 1 letter from Cardinal Timothy Dolan.

“I write to share some unpleasant and somber news concerning Father John Duffell, your just retired parish administrator,” Dolan wrote. “Father Duffell has been directed not to publicly exercise his priestly ministry due to an allegation from the past that he abused his position of authority in a violation of his promise of celibacy.”

“The allegation was made first to the District Attorney, and then brought to our attention,” Dolan said. “This allegation involves an adult; it does not involve a minor. It is important that the archdiocese take such allegations seriously.”

Although Dolan’s letter referenced Duffell as retired, Duffell was reappointed by the archdiocese for a one-year term as Blessed Sacrament’s administrator in October 2018.

Duffell was still listed as the parish pastor on Blessed Sacrament’s website and in the latest bulletin as of press time. The CNA report said that according to archdiocesan records, he’d been appointed administrator of the parish in 2014.

Duffell, 75, was ordained in 1969 by Cardinal Terrence Cooke, and has served mainly at parishes in Manhattan and Yonkers.

Fr. Duffell was ‘beloved by the gay community’

Duffell denied the allegation in a report from the New York Daily News. The priest had announced his retirement last Sunday and had expected to remain at Blessed Sacrament for another few weeks, the report said, but he’d told family and friends in a letter those plans changed last Monday when he was called to the archdiocesan chancery office and given a decree of suspension.

“Many years ago there was an allegation of sexual impropriety with an adult which I categorically denied because it was not true,” Duffell wrote in the letter. “Those files were subpoenaed from the Archdiocese by the Manhattan District Attorney.”

The Daily News spoke to Duffell by phone Sunday, and the priest declined to answer several questions, but said the allegation was “nothing more” than him being accused of breaking his vow of celibacy, and that the DA’s inquiry had begun very recently.

The article termed Duffell an “advocate for the LGBTQ Community,” “who for years has bucked the Catholic Church’s stance on homosexuality.” Calling the priest “beloved by the gay community” in its headline, the news outlet said Duffell has made national headlines for upwards of a decade “for positioning himself as an ally of the LGBTQ community.”

‘The Church is not perfect …. You deal with it as a broken system; you lie’

Duffell has been a vocal proponent of LGBT affirmation in homilies and elsewhere.

At a 2011 Fordham University conference on sexual diversity and the Catholic Church while pastor of New York City’s Church of the Ascension, Duffell said regarding LGBT issues that “the Church is perhaps the only way of affecting change in the world,” but “the Church is not perfect.”

Duffell told a conference participant to lie to Church officials about his same-sex attraction for the purpose of being accepted to the seminary.

The prospective seminarian had asked in writing how he should deal with the feeling that he is “broken” after being told he cannot enter the priesthood because he is homosexual.

“You’re not broken, the system is broken,” Duffell answered, “and therefore you deal with it as a broken system; you lie.”

The Vatican reaffirmed in 2008 the Church’s position that men who practice homosexuality, have deep-seated homosexual tendencies, or support the gay culture are not suited for the priesthood. Despite Pope Francis’ repeated expressions of permissiveness toward homosexuality, the pope has said as well that homosexuals should not be allowed to enter the seminary.

Blessed Sacrament, Duffell’s most recent parish assignment, has what it calls a “gay fellowship,” which is led by a man who “married” his same-sex partner in an Episcopal church in 2016. The parish organized a celebration of the “marriage” soon after the event, openly publicizing the gathering in the parish bulletin.

Catholic Church teaching holds that while same-sex attraction itself is not a sin, homosexual acts are sinful. Church teaching further states that “homosexual persons are called to chastity” (CCC 2359), which is also what its teaching says about all people, since sexual relations are reserved for marriage, which is between a man and woman (CCC 2360).

Duffell has had a close relationship with pop star Lady Gaga, according the New York Daily News. The performer, whose real name is Stefani Joanne Angelina Germanotta, shared a photo of them together on Instagram in 2016, praising one of Duffell’s sermons.

The picture underscored Duffell’s place of recognized LGBT advocacy, with Jesuit Father James Martin sharing it on his Facebook page and on Twitter, and drawing attention to Duffell’s appearing with the performer, stating, “Yesterday my friend Fr. John Duffell met a graduate of the Convent of the Sacred Heart in New York.”

Born This Way takes its moniker from the Lady Gaga song of the same name, popular with the LGBT movement for its message that same-sex attraction and gender confusion are innate traits.

The Church holds as well that human beings are not defined by their sexual inclinations.

Last month Blessed Sacrament’s “gay fellowship” sponsored as a fundraiser a staged reading of “Love! Valour! Compassion!” – a Terrence McNally play about eight gay men who spend three summer weekends together at an upstate New York vacation home. The event was promoted as an observation of the 1969 Stonewall riots, considered the birth of the “LGBT rights” movement.

Following the 2002 passage of U.S. Catholic bishops’ Essential Norms for dealing with clergy sex abuse, and in particular, the Charter for the Protection of Children and Young People, also called the Dallas Charter, Duffell had been among the most outspoken critics in the clergy of the Church’s policy.

He co-founded Voice of the Ordained, a group for New York-area priests and former priests with concerns about the Dallas Charter.

“Ordained ministers of the gospel are a group very much at risk at the moment,” Duffell told the Washington Post in 2002. “Given the norms approved in Dallas, anyone can make any kind of accusation against us and we're dead meat.”

In May of that year, Duffell criticized the initial suspension of Charles M. Kavanagh, a priest who was eventually laicized, and who was removed from ministry that month over allegations that he sexually abused a high school seminarian in the 1970’s.

“You almost hope the punishment could be leveled after the facts were determined,” Duffell had told the New York Times.

“According to the cardinal, this is the policy that has to be in effect because this is what the people want,” he said. “I wonder if that's really true. Isn't somebody innocent until proven guilty?”

Duffell was a technical adviser for the 2000 movie Keeping the Faith, about a priest and a rabbi in love with the same woman, their childhood friend.

In his letter informing Blessed Sacrament parishioners of Duffel’s removal from ministry, Dolan said that retired auxiliary Bishop Gerald Walsh would serve as parish administrator until a new pastor is appointed.