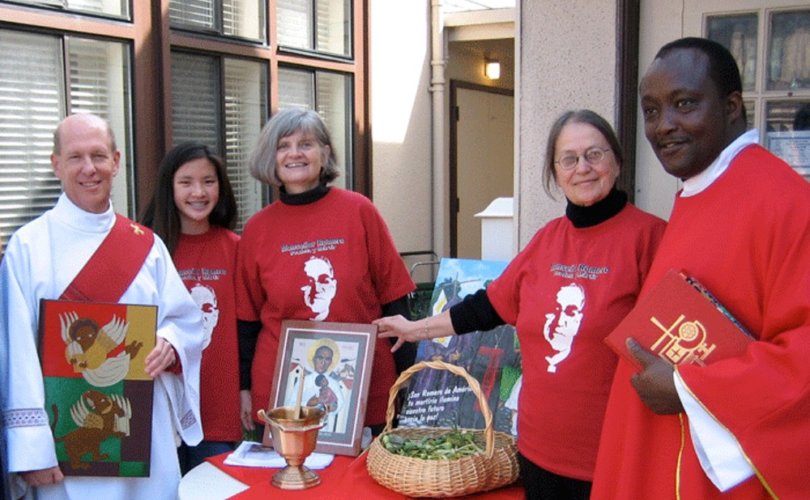 July 17, 2018 (LifeSiteNews) – A Catholic deacon who is openly homosexual has continued to write salacious reviews of obscene movies for a “gay” newspaper in San Francisco for at least a year since Archbishop Salvatore Cordileone was informed of his activities, LifeSite has learned.

Over a year ago, in June 2017 the archdiocese told LifeSite that Archbishop Salvatore Cordileone, Archbishop of San Francisco, was concerned about Deacon Brian Bromberger’s writings, but later acknowledged that the archbishop had met with Deacon Brian Bromberger and had allowed him to continue writing for the publication while exercising “careful discretion” over subject matter, given that it was his only source of income at the time.

However despite a steady stream of evidence of his ongoing infractions, Archbishop Cordileone has not revoked Bromberger’s faculties for functioning as a deacon in the archdiocese.

Three articles recently written by Bromberger openly attack Catholic doctrine, even calling a Catholic woman a “fanatic” for convincing her homosexual son to repent of his sodomy before his death.

The articles have been published in the homosexualist Bay Area Reporter, a publication that openly celebrates sexual perversion and mocks the Catholic Church on its front page. Bromberger has written for this publication since at least 2014, while functioning as a deacon in various Catholic parishes.

Despite being informed of Bromberger’s activities in May of last year, Archbishop Cordileone has maintained Bromberger on the list of clergy with faculties to function in the archdiocese. However, his director of communications, Mike Brown, has told LifeSite that his activities are under “review” by the archdiocese.

Now LifeSite has verified that, in the months since the archdiocese’s director of communications assured LifeSite that the deacon’s articles for the Bay Area Reporter were “part of the review process” being applied to him, the deacon has continued to write movie reviews and other articles for the newspaper that speak approvingly of obscene movies about homosexual relationships and even directly attack the Catholic faith.

Archbishop Cordileone’s apparent acceptance of Bromberger’s job as a writer for the Bay Area Reporter is in stark contrast to his numerous public statements condemning homosexual behavior and homosexual “marriage.” Archbishop Cordileone’s reputation has been so strong in this regard that he was made the chairman of the U.S. Conference of Catholic Bishops’ Subcommittee for the Promotion and Defense of Marriage. As of 2017 he is no longer a member of the committee.

Recent Bromberger articles for the Bay Area Reporter have included a sympathetic review of a book about a homosexual who died of AIDS, in which Bromberger calls the homosexual’s mother a “Catholic fanatic” for inducing him to repent of his sodomy before he died, and writes disparagingly about Catholic teachings on homosexuality in general.

In his review of the homoerotic movie “God's own Country,” Bromberger gives a positive account of two men having sex on a farm in the mud, and lets the reader know that he'll be able to see their body fluids as well: “The gay sexuality here is realistic, along with casual nudity, so there is no doubt that these two men are passionate for each other. The film is raw and naturalistic, and we see every body fluid, human and animal.”

In his article on a “queer Catholic,” whom he portrays as a positive example of a homosexual, Bromberger quotes the man as attacking Catholic doctrine on the immorality of sodomy: “The Church is top down … it deals in a priori principles and doctrines and tries to shoehorn lives and people that don’t fit into a model … hetero-normative, nuclear family, etc. Building a bridge means opening eyes to other ways of being alive and fulfilled in the world.”

“This 58-year-old man is about to marry his fiancé, who lives with his ex and with whom he co-parents three adopted boys,” the quote continues. “Does the church condemn that outright? I am providing material and emotional support to vulnerable children in the context of a loving, committed bond. It may not be ‘ideal,’ but on the other hand, to the LGBT community I’d say, don’t throw the ‘baby,’ the amazing message of unconditional acceptance of the gospel, out with the bathwater.”

In addition, he has conducted at least one other LGBT “workshop” at San Francisco’s Height Ashbury parish, St. Agnes, on the topic of homosexualist Fr. James Martin’s book “Building a Bridge.” Although the announcement in the parish bulletin claims that the workshop “doesn’t include a discussion on the Church changing its sexual ethics,” the event was advertised on Facebook as an event hosted by “Dignity San Francisco,” a homosexualist group that rejects Catholic doctrine on sexual morality and is associated with groups that practice sadomasochistic “leather” lifestyles.

The articles follow years of similar writings on the part of Bromberger, several of which were referenced in LifeSite’s November 2017 exposé on the deacon. It seems clear that despite the fact that diocesan officials have been informed and have even admitted that they have known about Bromberger’s activities for “a long time,” the deacon continues to promote sexual perversion with impunity.

Deacon continues to write dirty articles while “under review” by archdiocese

After raising the issue of Bromberger’s writings with Archbishop Cordileone’s secretary in June of 2017, LifeSite’s questions began to be referred to the archdiocese’s Director of Communications, Mike Brown, to whom LifeSite sent extensive evidence of Bromberger’s  articles and their content. LifeSite also sent information to the archdiocese about a gay “workshop” that Bromberger had done at a Catholic parish, called “LGBTQ gifts for the Institutional Church.”

After a few months of email inquiries, Brown agreed to a telephone interview with LifeSite, in which he admitted that Bromberger’s activities already had been known to the archdiocese “for a long time,” and that Archbishop Cordileone had met with Bromberger to speak to him about his behavior. Brown told LifeSite that Bromberger’s “public” activities were now under prior review and approval by the archdiocese, but that his writings for the Bay Area Reporter were regarded as a “private” activity, and they would not come under review by the archdiocese.

When pressed however, Brown, speaking in his own capacity, said the articles were also “part of the review process.” Brown also acknowledged that Bromberger would continue to be on the list of clerics with faculties to function as such within the Archdiocese of San Francisco.

In a follow-up question submitted by email in November, LifeSite pointed out to Brown that the Code of Canon Law (c. 831 §1) prohibits Catholic clergy from writing for publications that are accustomed to attack the Catholic faith or morals, unless they have permission from their local ordinary, which in this case would be Archbishop Cordileone. Asked if Bromberger has been given permission by Cordileone to write for the Bay Area Reporter, Brown answered, “The Archdiocese has not to date required him to cease this activity but as I mentioned in our interview all options are on the table as the review process continues.”

Cordileone meets with Bromberger a second time in December, allows him to continue writing

LifeSite again contacted Brown in January of this year, sending evidence of several new Bromberger articles for the Bay Area Reporter containing lascivious and morally subversive material. Brown then told LifeSite that Archbishop Cordileone had met with Bromberger personally for a second time, in December of 2017, and that he “has discussed these matters with the Archbishop,” and that he “has been counseled about his freelance work.”

“Since that meeting in early December we are not aware of any articles Bromberger has written in which he takes positions contrary to the teachings of the Church,” wrote Brown. “Know also that we continue to be in conversation with him about these matters.”

Brown also indicated that although Archbishop Cordileone had “asked” Bromberger to find a different job, he had also indicated that Bromberger should exercise “discretion” in his writings for the Bay Area Reporter, suggesting strongly that he had permission from the archbishop to write for the publication, as the Code of Canon Law requires. Moreover, Brown claimed that Bromberger was trying to “reach” people on behalf of the Catholic Church.

Brown told LifeSite that Bromberger’s “freelance writing in the Bay Area Reporter (BAR) is his only means of income, and this has been the situation for quite some time now.” However, he added, “At the same time, he has been asked to look for a more suitable publication to write for.  Under all these circumstances, the Archbishop has reminded him of the need to exercise careful discretion in the topics he chooses to write about, as he proceeds with his hope to reach people who otherwise would have no contact with the Church.”

In recent communications,Brown agreed that the articles were in violation of an agreement that Archbishop Cordileone had made with Bromberger, and claimed that the issue was important to the archbishop, but that he was out of town travelling and wouldn’t be able to address the problem for an unnamed period of time.

In mid-2017 an archdiocesan official told LifeSite that Archbishop Cordileone was taking the matter of Bromberger’s conduct seriously, but that the processes of addressing the issue would require an indefinite period of time to address.  One year later, Bromberger continues to write, and continues to receive faculties from the archdiocese to function as a deacon.

Brown repeated to LifeSite that the job is Bromberger’s only source of income. He added that Bromberger was continuing to be counseled and that an unnamed person who is monitoring his articles has noted some positive change in their content. Yet at the same time, Brown treated LifeSite’s revelation of the content of Bromberger’s articles as if it were information that the archdiocese had not known about.

Finally, Brown said that Bromberger had not carried out any new workshops since he had been placed in a process of review by the archdiocese last fall. LifeSite then informed Brown of the announced LGBT workshop done by Bromberger in January of this year. Brown replied,  “I was misinformed,” and added, “Further, the Archdiocese was unaware of this speaking engagement and if it did occur it is certainly a violation of the agreement with Deacon Bromberger.”

The Catholic Church, following the words of Scripture and its constant, 2000-year tradition, teaches that homosexual acts are gravely immoral, constituting a sin worthy of eternal punishment in hell, although like all sins it may be forgiven by God to those who repent of it and confess in the sacrament of penance.

The Catechism of the Catholic Church states: “Basing itself on Sacred Scripture, which presents homosexual acts as acts of grave depravity, tradition has always declared that ‘homosexual acts are intrinsically disordered.’ They are contrary to the natural law. They close the sexual act to the gift of life. They do not proceed from a genuine affective and sexual complementarity. Under no circumstances can they be approved.”

The tolerance of Deacon Bromberger’s morally subversive activities and associations would seem to contradict the recent words of Archbishop Cordileone’s condemnation of those who “remain silent” in the face of the “mockery” of God by homosexuals who flaunt their immoral lifestyle in public.

“And even in our own city of St. Francis, we see … the celebration and even exaltation of the vulgar and the blasphemous, mocking God’s beautiful plan in how He created us, in our very bodies, for communion with one another and Himself,” said Cordileone. “God is roundly mocked in our very streets, and it is met with approval and applause in our community – and yet, we remain silent,” he added.