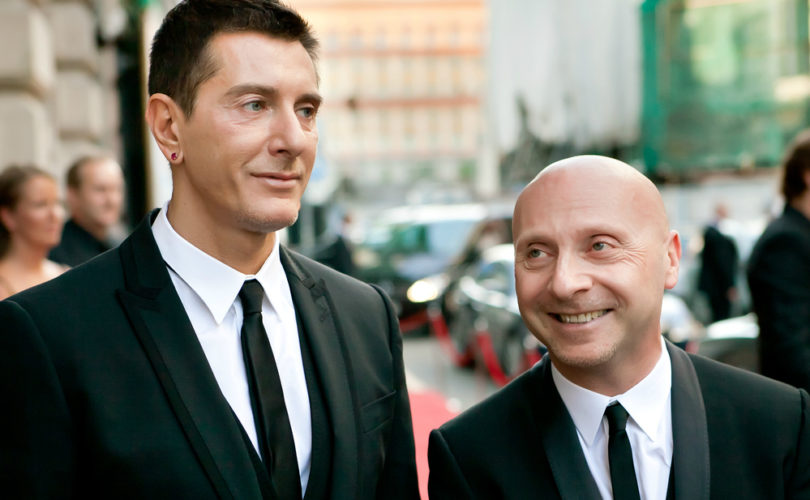 August 17, 2015 (LifeSiteNews) — Openly gay Italian fashion legend Domenico Dolce is backing off strong comments he made five months ago criticizing in vitro fertilization as part of a high-profile interview in which he and his partner Stefano Gabbana opposed gay “marriage” and adoption and defended the natural family.

On Friday Dolce told Vogue he was “sorry” about calling children conceived in IVF “synthetic” and that it was not his “intention to offend anyone.”

“I’ve done some soul-searching. I’ve talked to Stefano a lot about this. I’ve realized that my words were inappropriate, and I apologize. They are just kids,” he said. “You don’t need labels, baby labels.”

The pair told Italy’s Panorama magazine in March that they opposed gay “marriage” and adoption, find in vitro fertilization (IVF) unnatural, believe procreation “must be an act of love,” and that “the only family is the traditional one.”

“You are born to a mother and a father – or at least that’s how it should be,” Dolce said at that time. He questioned what he called “children of chemistry” and “synthetic babies,” a reference to in vitro fertilization used by gay couples to obtain children, asking “how do you tell a child who their mother is” in a world of “rented wombs” and “catalog sperm”?

Dolce’s backpedaling comes as the designers are in the midst of pushing their fall 2015 collection celebrating family that includes designs for pregnant ladies, babies and children.

Dolce, who is a Catholic and reportedly attends Mass regularly, told Vogue that science gives everyone the chance to make the children they want. “I think everybody chooses for themselves. I don’t know everything about IVF, but I love it when people are happy. It’s like medicine. Science has been put on the table to help people.”

Gabbana, who is also a Catholic but non-practicing, said in the same Vogue interview that he once thought of going to California and “having a baby” but since he could not bring it back to Italy, he decided not to proceed. At no point in the interview did Gabbana explicitly apologize for the March comments.

The Catholic faith teaches that IVF is “morally unacceptable” since it separates baby-making from its only moral and rightful place, namely marital love-making.

“The act which brings the child into existence is no longer an act by which two persons give themselves to one another, but one that entrusts the life and identity of the embryo into the power of doctors and biologists and establishes the domination of technology over the origin and destiny of the human person,” the Catechism of the Catholic Church teaches.

“Such a relationship of domination is in itself contrary to the dignity and equality that must be common to parents and children. Under the moral aspect procreation is deprived of its proper perfection when it is not willed as the fruit of the conjugal act, that is to say, of the specific act of the spouses' union,” the Church adds.

The Vogue interview concluded with a comment from Dolce in which he stated: “Who needs an institution to tell us how to love? We shouldn’t become too rigid. We need to understand, accept everyone.”

Dolce’s insightful comments last March into the inherent complementarity between a man and woman inspired six Americans raised by homosexual parents to send a letter of support to the designers thanking them for speaking the truth about the family.

“We want to thank you for giving voice to something that we learned by experience: Every human being has a mother and a father, and to cut either from a child’s life is to rob the child of dignity, humanity, and equality,” the group stated.

They warned the pair to expect “vicious attacks” from the homosexual lobby for questioning its policies.

“You have shown yourselves to be extremely brave. You have given us great inspiration as all six of us prepare to submit letters to the US Supreme Court against gay marriage,” they wrote at that time, urging the pair to “not to surrender when the backlash grows in intensity.”

“If you back down from what you said and apologize,” the group concluded, “it will leave the children of gay homes even more vulnerable and discredited. It is important for our sake, for the sake of Italian children as well, that you not apologize or capitulate. Please support the idea that all children need to be bonded with their mothers and fathers. It is a human right.”

Nature vs. synthetics: What’s at stake in the Dolce and Gabbana controversy