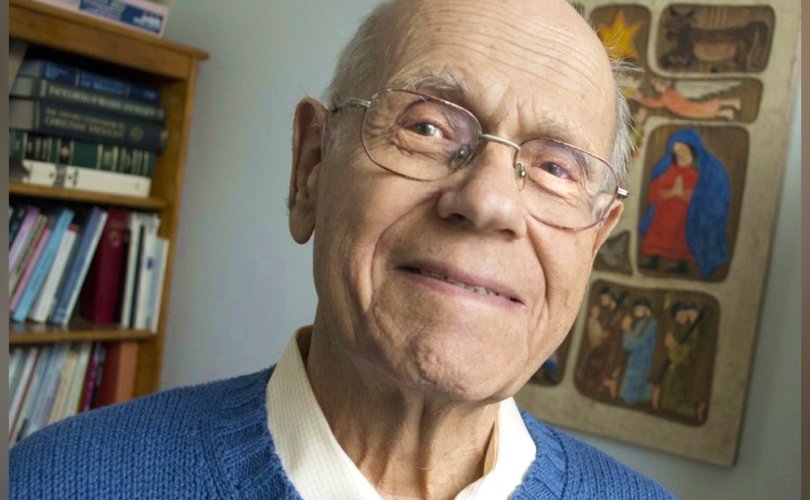 MONTREAL, October 19, 2017 (LifeSiteNews) — Dissident Canadian theologian and former priest Gregory Baum died Wednesday in Montreal. Catholics are being asked to pray for the repose of his soul.

Baum was admitted to St. Mary's Hospital Center 10 days ago after a fall in his home, reported Presence Information Religieuse. He had previously suffered from kidney failure and had to undergo dialysis three times a week. He was 94.

He was born in Berlin, Germany, in 1923 into a wealthy bourgeois family of Jewish origin and Protestant culture. He traveled to Great Britain at age 15 as a refugee and was interned by the British government because of his German origin.

Baum was then sent by the government to a confinement camp in Montreal, where he eventually secured his freedom in 1942 with the help of Emma Kaufman, a wealthy Protestant from Kitchener, Ontario. He went on to study mathematics and physics at McMaster University in Hamilton. He entered the Augustinian order in 1946 after having read the Confessions of St. Augustine.

Baum attended the Second Vatican Council (1962-65) as a peritus, or theological expert. He vigorously opposed Catholic teaching on a range of issues, including contraception, priestly celibacy, and homosexuality.

He was one of the most outspoken critics of Pope Paul VI's 1968 condemnation of contraception in the encyclical Humanae Vitae, even to the point of rallying opposition to the teaching.

Baum played no small part in the outcome of the Canadian bishops adopting a position of open dissent from Humanae Vitae two months after its release.

In their September 27, 1968, controversial “Winnipeg Statement,” the bishops opened a door for couples to use contraception, stating that if a couple has “tried sincerely but without success to pursue a line of conduct in keeping with the given directives, they may be safely assured that, whoever honestly chooses that course which seems right to him does so in good conscience.”

Monsignor Vincent Foy, who was known until his death as the foremost expert on the Canadian bishops’ dissent in Winnipeg, wrote that Baum’s influence over the bishops’ proceedings at that time cast a “black shadow.”

“If it had not been for the black shadow of Baum over Winnipeg, his influence over some Bishops, the Canadian theological establishment and pressure groups, the Winnipeg Statement of the Canadian Bishops on Humanae Vitae would not have refused to endorse the teaching of the encyclical as it did,” he wrote.

Baum revealed in a book published this year that he secretly led an active homosexual life for decades.

In The Oil Has Not Run Dry: The Story of My Theological Pathway, Baum states that he chose to keep his homosexuality a secret while appearing to be a faithful priest so he could continue to exert his influence within the Catholic Church.

“I did not profess my own homosexuality in public because such an act of honesty would have reduced my influence as a critical theologian,” he wrote.

“I was eager to be heard as a theologian trusting in God as salvator mundi (Savior of the world) and committed to social justice, liberation theology, and global solidarity,” he added.

In his book, Baum details his homosexual experiences.

“I was 40 years old when I had my first sexual encounter with a man. I met him in a restaurant in London. This was exciting and at the same time disappointing, for I knew what love was and what I really wanted was to share my life with a partner.”

He wrote that he considered resigning from the priesthood but did not go through with the formality, rather choosing to announce it in the national newspaper. He later married a divorced ex-nun who he says “did not mind that, when we moved to Montreal in 1986, I met Normand, a former priest, with whom I fell in love.” Normand, he wrote, “is gay and welcomed my sexual embrace.”

Noted Toronto Catholic priest and Vatican consultant Fr. Thomas Rosica hosted a controversial appearance of Baum at the Catholic Newman Centre of the University of Toronto in 1996 and in 2012 made him a featured guest on his Canadian Catholic TV station Salt and Light Television.

During the Salt and Light interview, Fr. Rosica professed to having known Baum for a long time and praised him for his theology.

“I’ve certainly admired very much your theology, your writings but also your love of the Church, your love of Christ, and you helped to keep alive not only the spirit of the Second Vatican Council but also the authentic teaching of the Council,” Fr. Rosica said of Baum.

Monsignor Foy, on the other hand, considered Baum as having “done more than any person to harm the Church in Canada.”