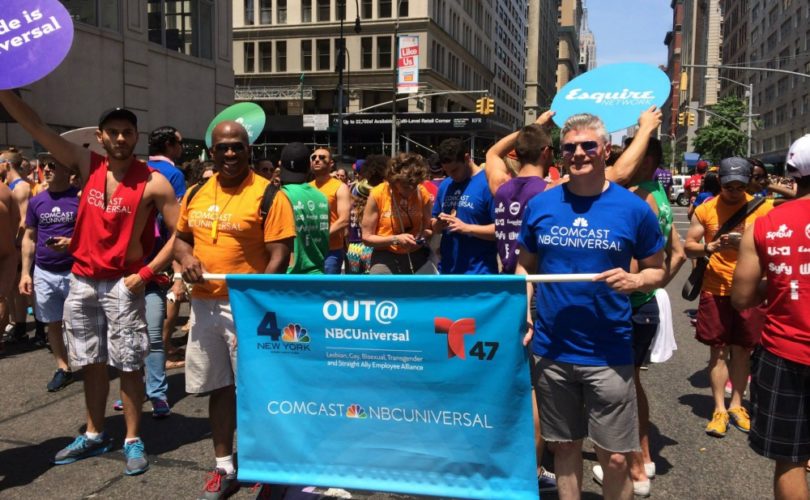 A homosexual organization given permission to march in New York’s Saint Patrick’s Day parade is not merely a “gay identity” group but actively promotes the homosexual political and social agenda, despite assurances to the contrary by parade organizers and the parade’s next “Grand Marshal,” Cardinal Timothy Dolan, LifeSiteNews has learned.

The organization, “[email protected]” has been billed as a group merely representing NBCUniversal employees with homosexual tendencies.  However, its Facebook and Twitter feeds indicate that the group is actively involved in movements and events that legitimize the homosexual lifestyle, including: “celebrating” Harvey Milk, a famously homosexual politician who biographers say enjoyed sexual relationships with underage boys; advocating homosexual “marriage” and anti-Christian “non-discrimination” legislation; and participating in lurid “pride” parades.

On its Facebook page the group celebrates the 45th anniversary of the Stonewall Riots, in which homosexual activists assaulted police attempting to close their illegal homosexual bar, by lauding Milk. “#3: MILK – His life changed history. His courage changed lives. Academy Award winner Sean Penn stars in this stirring celebration of Harvey Milk, a true man of the people,” the post read. In another post, the group brags about NBCUniversal’s display of a replica of a suit worn by Milk on display at the company.

Its Twitter feed advocates passage of the “Employment Non-Discrimination Act,” which the U.S. bishops have warned presents a threat to religious liberty “by punishing as discrimination the religious or moral disapproval of same-sex sexual conduct.” The tweet stated: “LOOK: Who's standing up for #WorkplaceEquality? Latest count: 152 members of Congress sign #ENDA discharge petition: https://ow.ly/BCBiF.”

[email protected] forms a part of NBCUniversal’s homosexual activist agenda, which seeks to “raise awareness and resources” for organizations that promote homosexual political and social causes, including the Human Rights Campaign (HRC), the Gay and Lesbian Alliance Against Discrimination (GLAAD), the Gay, Lesbian & Straight Education Network (GLSEN), and more than a dozen other groups, according to the website of parent company Comcast.  NBC is the broadcaster of the Saint Patrick’s Day Parade.

The activities of the group would seem to belie the claim by parade organizers that they are “remaining loyal to church teachings” despite their inclusion of the group, and seek to “keep politics—of any kind—out of the Parade in order to preserve it as a single and unified cultural event,” a claim backed by the parade’s “Grand Marshal” for 2015, Cardinal Timothy Dolan.

In his recent defense of his decision to lead the Saint Patrick’s Day Parade despite the presence of [email protected], Dolan wrote, “The committee’s decision allows a group to publicize its identity, not promote actions contrary to the values of the Church that are such an essential part of Irish culture.”  He added: “I have been assured that the new group marching is not promoting an agenda contrary to Church teaching, but simply identifying themselves as ‘Gay people of Irish ancestry.’”

A request for comment from Cardinal Dolan’s director of communications, Joseph Zwilling, was not answered by press time.