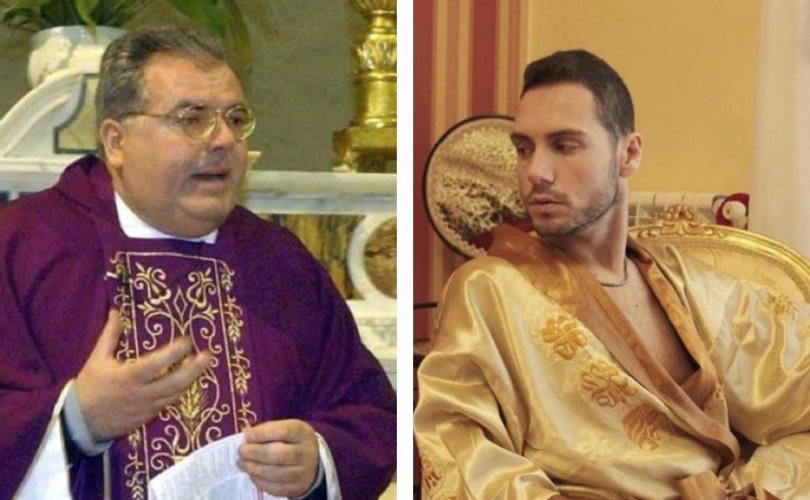 Fr. Luca Morini, priest at the heart of the controversy, and male escort Francesco Mangiacapra.

The author of the dossier, gay “escort” Francesco Mangiacapra, said he wrote the report because he could no longer stand the “hypocrisy” of the many priests he serviced.

“I want to explain right away that mine is not a gesture that goes against the Catholic Church, indeed, it is paradoxically in its favor,” said Mangiacapra in an interview with Catania Today.

“The goal isn't to hurt the people I've mentioned [in the dossier], but to help them understand that their double life . . . isn't useful to them or to the people who rely on them for guidance,” said Mangiacapra.

“Their behavior is, in many cases, a result of the impunity that the high hierarchy of the Church has made habitual,” continued the escort, “that unjust tolerance that feeds the idea that it is possible to separate that which is lived from that which is professed, as typical of those who have a schizophrenic, double morality.”

One of Mangiacapra’s clients, Father Luca Morini, had originally presented himself as a wealthy judge. When the young male escort later discovered the “judge” was in fact a priest, he wondered how a simple parish priest could afford his sexual services, lavish meals and expensive gifts. He immediately suspected that the priest’s sexual escapades were funded by money illicitly obtained by dipping into his parish’s collection plate.

Mangiacapra reported Morini to the diocese of Massa Carrara-Pontremoli. The diocese, however, failed to take action until it discovered that a television news show, Le Iene, was preparing an investigative report on the priest’s hidden lavish gay lifestyle.

The diocese quickly tucked Fr. Morini away in a €200,000.00 house it had purchased for him, with monthly utility bills and maid covered by the diocese. “These were allegedly obtained from the bishop of Massa Carrara-Pontremoli, Giovanni Santucci, through blackmail,” according to a Church Militant report, “as Morini had ‘threatened to expose to the public eye unpleasant facts about many diocesan priests.’

“Bishop Santucci also gave Don Euro €4,500,00 from his own personal bank account, as well as €1,000.00 from diocesan funds,” continues the report. “The bishop is also currently under investigation.”

“The episode aired by Le Iene shows footage of Fr. Morini snorting cocaine and parading in the company of several male escorts, as well as interviews with many of the parishioners, who testify that the priest was constantly pestering them for money, even during confessions,” according to Church Militant.

“The experience with the double-life priest was not isolated, and Mangiacapra soon learned that most of his clients who were friends of the priest were also members of the clergy, and that he’d somehow found himself quite unexpectedly the favorite boy toy in a gay-priest sex ring,” according to The Daily Beast. “He did what any self-serving male prostitute might do and started researching a book about it called Il Numero Uno. Confessioni di un Marchettaro (The Number One. Confessions of a Prostitute).”

But the church, it seemed, didn’t pay much attention to the book, which was published last March, so Mangiacapra brought it to the attention of various high-ranking cardinals by compiling his raw research into a 1,200-page dossier focused on nearly 40 priests across Italy that he took to the archdiocese of Naples, led by Cardinal Cresenzio Sepe, who decided to act and sent the dossier straight to the Vatican. Sepe told Corriere della Sera that Naples “didn’t enter into it” and that none of the gay priests were Neapolitan. “Our diocese was used like a post office,” he said. “We just delivered the message to Rome.”

The Italian equivalent of Drudge Report, Dagospia, was allegedly able to see some of the dossier from which it published various excerpts, including screenshots of messages. Several show what appear to be “dick pics” of priests with messages about where and how they wanted to have sex with each other and the escorts. In one, an apparent priest invites the escort along to an ordination, after which they would have sex nearby. The message ends with “see you later, I’ll tell you when the mass is.”

The gay prostitute’s dossier is just the latest in a string of sex scandals rocking the Italian Church and the Vatican.

Monsignor Pietro Amenta of the Italian Archdiocese of Matera pled guilty to possessing child pornography last month. The charge was brought against him after he allegedly sexually assaulted and threatened an 18-year-old Romanian male, which led police to raid the monsignor’s home and find pornographic images of children.

Amenta resigned from his position on the Roman Rota – the Vatican’s highest court – and received a suspended sentence of 14 months in prison.  The suspended sentence, which he received as part of a deal with prosecutors, means he will not actually be imprisoned.

The homosexual subculture throughout Vatican offices goes back decades but seems to have experienced a major resurgence during the Francis papacy.

The priest, Monsignor Luigi Capozzi, was able to easily transport cocaine without his car being searched because he used a BMW with Holy See license plates.