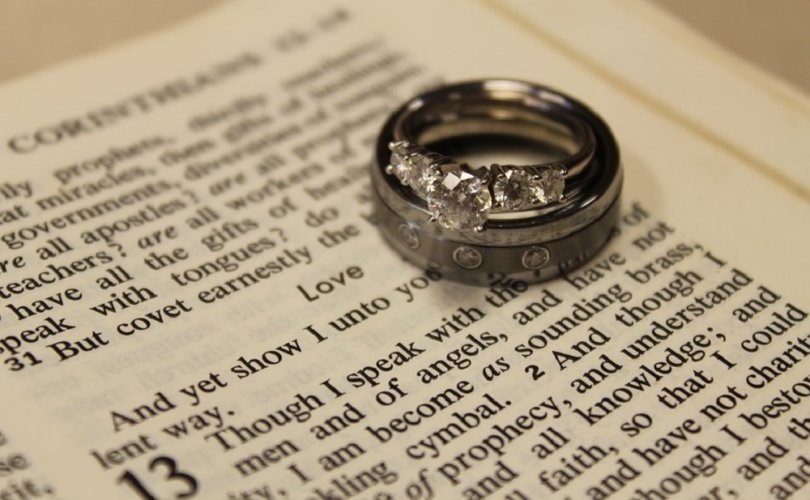 WILMINGTON, Delaware, September 18, 2019 (LifeSiteNews) — A former Catholic priest who is in a same-sex “marriage” with another ex-priest has apparently resigned from his position on the marriage tribunal of the Diocese of Wilmington.

Diocescan marriage tribunals determine whether Catholic couples may be granted annulments. An annulment is the Church’s ruling that a presumed marriage actually never was a sacramental marriage.

“An annulment is a declaration by a Church tribunal (a Catholic church court) that a marriage thought to be valid according to Church law actually fell short of at least one of the essential elements required for a binding union,” the United States Conference of Catholic Bishops explains. “A representative for the Church, called the defender of the bond, will argue for the validity of the marriage.”

The ex-priest is Jack D. Anderson, who is “married” to another ex-priest, Ted Olson. George Neumayr first reported on the scandal at The American Spectator. Anderson’s job on the marriage tribunal was “defender of the bond” — arguing for the validity of the marriage in question.

The two men are now involved at the Church of the Holy Spirit, an Episocpalian association in Harleysville, Pennsylvania. According to the Church of the Holy Spirit’s website, Anderson was formally received into the Episcopalians in May 2014 and is involved with several of their ministries. Olson is listed as a member of the vestry. Another page about Olson on the parish has the word “priest” in the URL, although neither Olson nor Anderson is listed on the church’s “staff” page. Anderson’s page also has the word “priest” in the URL.

Before leaving the priesthood, Olson was a priest of the Diocese of Wilmington, according to Neumayr. Neumayr reported on September 15 that Anderson was a onetime close friend of Bishop Joseph Bambera, the current bishop of Scranton, Pennsylvania. According to Neumayr, there is a chance Bambera will replace Philadelphia’s Archbishop Charles Chaput — who is about to turn 75, the age when bishops are required to submit their retirement notice to the pope — and become a cardinal.

Bambera is also Monsignor Walter Rossi’s ordinary. Rossi is the rector of Washington, D.C.’s Basilica of the National Shrine of the Immaculate Conception and currently under a joint investigation by the D.C. archdiocese and the Diocese of Scranton.

Neumayr has written about Rossi extensively.

The Diocese of Wilmington is led by Bishop William F. Malooley.

“After their seminary days, [Bambera and Anderson] had both worked together on the canon law tribunal in Scranton,” wrote Neumayr. “Curious about the exact nature of their friendship, I searched for Jack Anderson’s contact information in the hopes of talking with him. In the course of this research, I stumbled across a story that provides a window on yet another travesty in the American Catholic Church.”

That discovery was that an openly gay-“married” ex-priest Anderson was on the Diocese of Wilmington’s marriage tribunal.

“I called the diocese of Wilmington and asked how a former priest who rejected the Catholic faith (and therefore in the eyes of the Church is a public heretic) and entered a gay marriage could licitly serve as a ‘defender of the [marital] bond’ on a Catholic tribunal,” Neumayr continued. “The Wilmington officials to whom I reached out either declined to answer the question or ignored my calls. The spokesman for Bishop Bambera, meanwhile, would only say that Anderson left the priesthood ‘voluntarily,’ which suggests that he hasn’t even been laicized. (Olson said that he himself has not been laicized.)”

“To call Anderson’s status irregular is an understatement. It is an open scandal — a scandal that both Bishop Bambera and Wilmington Bishop William Malooly have facilitated, insofar as Anderson’s presence on the tribunal requires their knowledge and approval,” he wrote. “Anderson’s work on the tribunal raises other awkward questions, such as: What accounts for his protected status? Is it possible that the bishops haven’t removed him from the tribunal due to dirt he might have on priests in Wilmington and Scranton?”

On September 16, Neumayr tweeted, “Well, that was easy. Jack Anderson finally returned my call, informing me that he has resigned his position as defender of the bond in the diocese of Wilmington, ‘effective immediately.’”

As of September 18 at 7:55 P.M. EST, Anderson’s name was removed from the Diocese of Wilmington’s marriage tribunal webpage. Only Sr. Patricia Smith, OSF, JCD is listed as a defender of the bond.

“In those situations where homosexual unions have been legally recognized or have been given the legal status and rights belonging to marriage, clear and emphatic opposition is a duty,” the 2003 Congregation for the Doctrine of the Faith document “Considerations Regarding Proposals to Give Legal Recognition to Unions Between Homosexual Persons” says. “One must refrain from any kind of formal cooperation in the enactment or application of such gravely unjust laws and, as far as possible, from material cooperation on the level of their application. In this area, everyone can exercise the right to conscientious objection.”

The sacrament of Holy Orders (ordination) “configures the recipient to Christ by a special grace of the Holy Spirit, so that he may serve as Christ’s instrument for his Church,” the Church teaches. “By ordination one is enabled to act as a representative of Christ, Head of the Church, in his triple office of priest, prophet, and king. As in the case of Baptism and Confirmation this share in Christ's office is granted once for all. The sacrament of Holy Orders, like the other two, confers an indelible spiritual character and cannot be repeated or conferred temporarily. It is true that someone validly ordained can, for grave reasons, be discharged from the obligations and functions linked to ordination, or can be forbidden to exercise them; but he cannot become a layman again in the strict sense, because the character imprinted by ordination is for ever. The vocation and mission received on the day of his ordination mark him permanently” (CCC 1581–1583).

A spokesman for the Diocese of Wilmington did not respond to LifeSiteNews’s requests for confirmation of Anderson’s employment. LifeSiteNews will update this story if there are further developments.