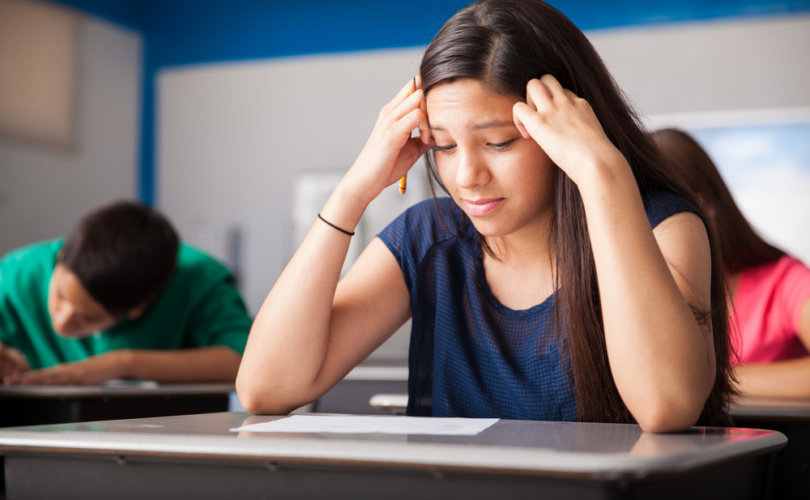 It's a nightmare come true for many Ontario parents, says Jack Fonseca, a senior political analyst with Campaign Life Coalition.

In one of four scenarios presented to 14-year-old boys and girls as part of a health class final exam (exam available here), a 17-year-old boy kisses and masturbates another 15-year-old boy to orgasm in a car and they then talk about having oral sex.

“Mario ejaculated after Al rubbed him with his hand. It felt great. They even talked about trying oral sex next time they are together,” states the scenario in the exam.

The assignment then asks students to explain the “support” they would give the younger teenaged boy if he decided to “come out to his family and friends that he is gay.”

“In this example, we see the coming to fruition of the fears parents had with regards to this curriculum,” said Fonseca.

“Explicit homosexuality is being presented to kids and there seems to be an agenda there to normalize homosexual activity without any regard for the religious or moral beliefs of families,” he said.

The assignment, which was worth 15 percent of the students' final grade at this Thames Valley District School Board high school in London, Ontario, included other sexual scenarios.

In one of them, a teenaged girl, pressured by her boyfriend, reluctantly agrees to have “unprotected sex” while both of them are intoxicated at a party where there are drugs and the alcohol flows freely.

“Later at the party, they proceed to head upstairs to a vacant bedroom together and have unprotected sex,” states the scenario.

In yet another scenario, a teenage girl sends a photograph of her “bare breasts” to her boyfriend who insists on having “sexy pictures.”

A mother in the London-area pubic board called the material “shocking.”

“When I read the health assignment, I felt that I had been kicked in the stomach. I could not believe that children would be exposed to this,” she told LifeSiteNews under condition of anonymity.

“I knew about the Liberal’s sex-ed, but I didn't expect to find anything I wouldn't have been willing to let my daughter read and discuss with me. We talk freely about these topics, and although I have been saddened that she has had to learn so many things long before my generation did, I answer all of her questions,” the mother said.

“I could not believe what I was reading, and of course, I would never let her read that. I consider that pornographic material and it is implanting sexual images into children's minds, not teaching health,” she added.

According to Fonseca, the sexual explicitness of these scenarios is completely unnecessary. He suggested the explicit nature of the scenarios was done with the intent to sexualize children.

“The students were presented with pornography,” said Fonseca. “The teacher, in presenting that story to students, in fact, presented pornography to students and that is a crime in this country and I think it would be appropriate for parents to follow that up with police.”

After the last provincial election in Ontario, incoming Ontario Premier Doug Ford's government announced it would be scrapping at the request of tens of thousands of parents the Kathleen-Wynne Liberal sex-ed curriculum then in place.

Many of these parents were alarmed by the age inappropriateness of the sex-ed curriculum and its promotion of homosexuality and gender identity.

Despite Ford's announcement, though, the sex ed curriculum controversy rages on in Ontario.

But Tanya Granic Allen, president of the Parents As First Educators group that fought to have the sex-ed curriculum repealed, says teachers have no right to disobey the provincial government and keep teaching the soon-to-be-gone curriculum.

“Teachers cannot go rogue,” she said. “The union is out to break faith and trust with the parents and children they are supposed to be serving. The teachers cannot take control when the parents have consistently said they don’t want the Kathleen Wynne sex-ed program.”

Ontario's provincial government has pledged to undertake a series of public consultations on the sex-ed curriculum.

Earlier this week, the conservative government released an interim sex-ed to be used for the upcoming school year and asked parents to report teachers who refused to follow it.