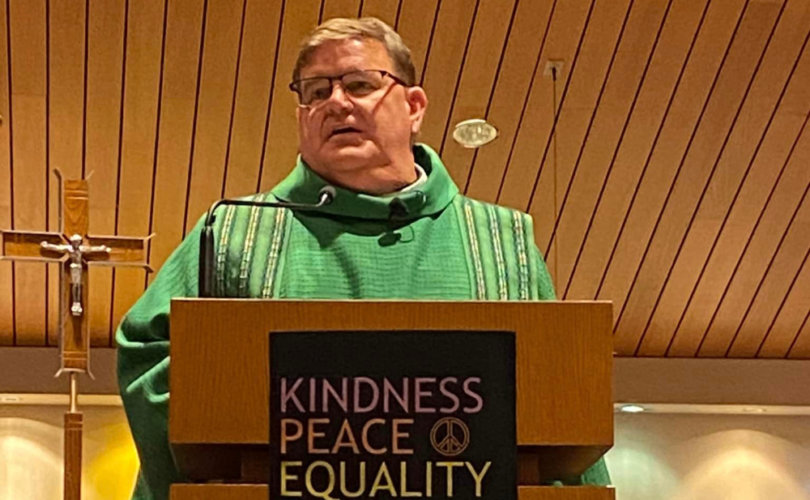 MILWAUKEE (LifeSiteNews) – A self-proclaimed “gay” Catholic priest celebrated an LGBT Mass on Saturday and called for wider “inclusion of the LGBT movement in the Church.

The so-called “LGBTQ Mass of Celebration and Inclusion” was offered by Father Greg Greiten in St. Bernadette’s Church in the Archdiocese of Milwaukee as an event “honoring national coming out day.”

“Gay, straight, family, friends and allies … All are welcome!” read the advertisement.

Both the church and the parish room were decked in the rainbow colors, and on the pulpit a sign was raised reading “Kindness, Peace, Equality, Love, Inclusion, Hope, Diversity.” In front of the altar, the transgender flag was positioned, bearing the inscription “Everyone is welcome here.”

Opening his homily, Greiten quoted the dissident Bishop John Stowe from his own address at the pro-LGBT Outreach conference earlier this year – organized by Fr. James Martin, S.J. – “I love you. You are loved. You are beloved. You are holy. You are made in the image of God.” Fr. Martin has in turn regularly praised Greiten in social media posts online.

“Your community has failed you,” he said, referring to the Catholic Church’s denouncement of homosexuality and LGBT ideology.

“We long for our shepherds … to seek us out, to find us and to stand with us,” he said.

“I long for the day when this church, and many other churches, can be filled as we celebrate the lives of LGBTQ people in our midst,” he added. “Today, lepers teach the lesson to us.”

Greiten did not mention the Catholic Church’s teaching on homosexuality or chastity at all during his 20-minute homily. Instead, he referenced Fr. Martin and Sr. Jeannine Gramick, both of whom who prominently advocate for LGBT ideology in contradiction of the Church’s teaching.

Greiten said that those who opposed the advancement of LGBT ideology in the Church should be the ones to leave: “Why don’t you get to leave, since you are bringing such hatred into the Church?”

— Article continues below Petition —
Demand that the Archdiocese of Indianapolis let Kim Zember speak!
Show Petition Text
4964 have signed the petition.
Let's get to 5000!
Thank you for signing this petition!
Add your signature:
Show Petition Text

Along with the deacon, Greiten distributed Holy Communion to those attending the Mass.

Local news reported that the Mass was attended by around 100 people, both young and old, described as being “eager to remain in the Catholic faith while also pushing for change.”

A number of the LGBT congregation spoke after Greiten had delivered his homily, including a lesbian pair and  “transgender woman” Hailey Hable. Hable slated “certain dioceses that are trying to be exclusionary towards LGBTQ people,” saying that if LGBT individuals were accepted into the Church, then “the Church will grow, and we will have a whole other perspective on what it means to be Catholic.”

Greiten himself made media headlines in 2017 when he announced he was “gay” in a column on dissident National Catholic Reporter.

“As a priest of the Roman Catholic Church currently serving in the Archdiocese of Milwaukee, I would like to apologize personally to my LGBT brothers and sisters for my part in remaining silent in the face of the actions and inactions taken by my faith community towards the Catholic LGBT community as well as the larger LGBT community,” he wrote. “I pledge to you that I will no longer live my life in the shadows of secrecy. I promise to be my authentically gay self.”

LifeSiteNews contacted Milwaukee Archbishop Jerome E. Listecki about the recent Mass, asking if he condoned the event. LifeSite also questioned the status of Fr. Greiten in the archdiocese, given that it is now nearly five years since he announced he was homosexual. The archdiocese replied that “the Catholic Church welcomes everyone, and invites everyone to live a chaste life consistent with his or her vocation in life.”

“Inviting those who experience same-sex attraction to understand and embrace the teachings of the Catholic Church is part of our pastoral care and concern,” a spokesman said.

Every Mass celebrated is a Mass of inclusion. Jesus Christ invites each of us to share in his passion, death and resurrection in the holy sacrifice of the Mass. However, focusing on inclusion without embracing Church teaching can send mixed messages, causing confusion for the Catholic faithful, and therefore is not something the archdiocese condones.

“Those who experience same sex attraction, along with their families, can find pastoral care and resources through Courage and EnCourage, which are international Catholic ministries with local chapters here in Milwaukee,” the spokesman added. There was no mention of any sanctions on Greiten.

LifeSite also contacted Greiten about the Mass, asking a number of questions. He responded, writing, “God Is Love! Jesus says, ‘This is my commandment that you Love One Another.’ Love always.”

While Greiten promoted the acceptance of LGBT ideology as a means to “welcome” people, the Catholic Church denounces such a stance. The Congregation for the Doctrine of the Faith’s (CDF) 1986 document “On the pastoral care of homosexual persons” states that a “truly pastoral approach will appreciate the need for homosexual persons to avoid the near occasions of sin.”

The CDF’s 1975 document, Persona Humana, also echoed this with the words, “There can be no true promotion of man’s dignity unless the essential order of his nature is respected.”

Furthermore, the Catechism of the Catholic Church #2357 teaches that “‘homosexual acts are intrinsically disordered.’ They are contrary to the natural law. They close the sexual act to the gift of life. They do not proceed from a genuine affective and sexual complementarity. Under no circumstances can they be approved.”