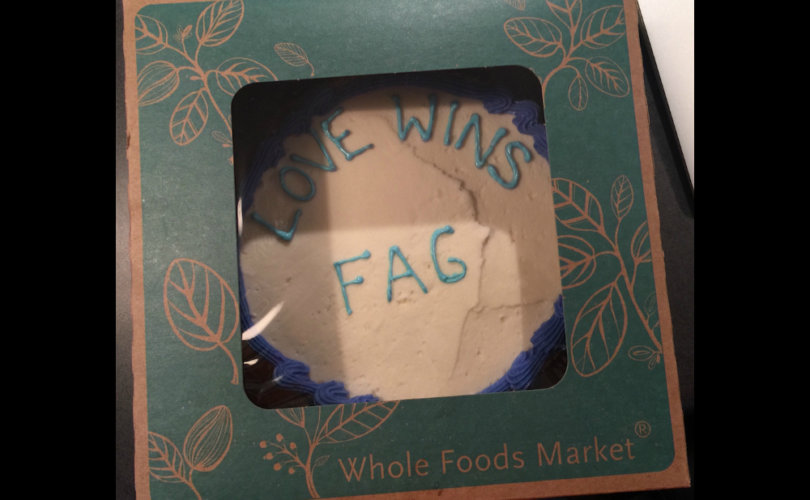 AUSTIN, Texas, May 16, 2016 (LifeSiteNews) – An openly homosexual man and self-described pastor of The Church of Open Doors has admitted his claim that Whole Foods baked him a cake decorated with an anti-homosexual slur was totally false.

“Today I am dismissing my lawsuit against Whole Foods Market. The company did nothing wrong,” Jordan Brown admitted. “I was wrong to pursue this matter and use the media to perpetuate this story. … I want to apologize to Whole Foods and its team members for questioning the company’s commitment to its values, and especially the bakery associate who I understand was put in a terrible position because of my actions.”

Jordan Brown won wide social media coverage last month when he tweeted and announced at a press conference that a Whole Foods bakery had added the word “fag” to the message “love wins,” which he had requested for a birthday cake for a member of his LGBT congregation.

“For me, it was humiliating,” he told reporters, “because being a pastor who is also openly gay, I’ve had to deal with this in the past and literally the feeling that I had just resurfaced a bunch of painful memories of things that have happened to me.” After seeing the slur, his lawsuit claimed, “Pastor Jordan spent the remainder of the day in tears. He was and is extremely upset.”

But the story unravelled quickly as Whole Foods released security video footage showing Brown apparently purchasing the cake with labelling differently located on the box from where it was on the box displayed at the news conference and on the Internet. Whole Foods also countersued for $100,000 and completely denied the story.

“We stand behind our bakery team member, who is part of the LGBTQ community,” the company’s denial read in part. “This claim is completely false and directly contradicts Whole Food Market’s inclusive culture, which celebrates diversity.”

On Monday, Whole Foods welcomed Brown's decision to end his lawsuit, and said they will drop their countersuit.

“Given Mr. Brown’s apology and public admission that his story was a complete fabrication, we see no reason to move forward with our counter suit to defend the integrity of our brand and team members,” the company said in a statement.