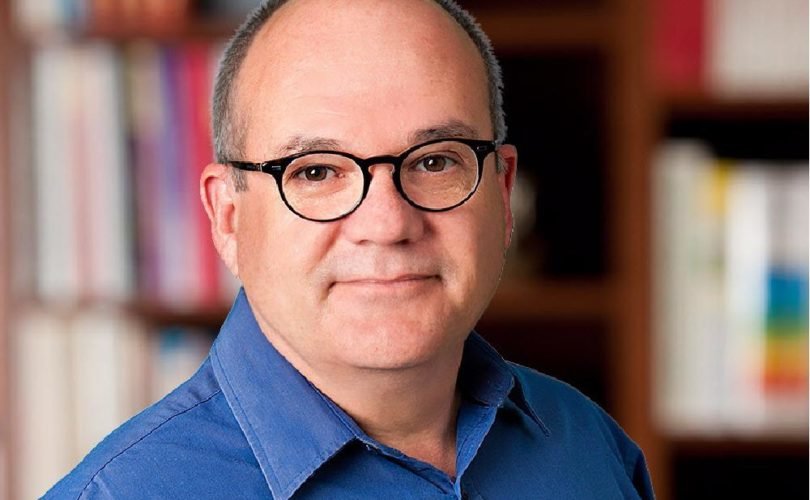 OTTAWA, June 8, 2015 (LifeSiteNews) — A Catholic priest in the Archdiocese of Ottawa who openly proclaims he is ‘gay’ has used public radio and social media to smear Cardinal Raymond Burke for his outspoken defense of Catholic teaching, calling the high profile Church leader who visited Ottawa last week a “clown” and a “drag queen,” and now saying that the cardinal's statements on homosexuality are “violent.”

“As a gay [man] and as a priest of the Archdiocese of Ottawa, I am upset at the visit of this person,” stated Fr. Andre Samson, who is a Faculty of Education professor at the University of Ottawa. Samson first criticized the cardinal in an email submitted in French to CBC’s Radio-Canada program and read on air June 1. A translation of Samson’s various statements have been made available at Big Blue Wave.

“I particularly blame those who invited him, the CCO Movement [LifeSiteNews note: it was actually NET Canada], Catholic Christian Outreach —who seek to provoke and to distance themselves from the current pope. The resistance towards Pope Francis has regrouped themselves around this operetta cardinal who likes to disguise himself as a drag queen. I know well today’s youth because I’ve taught at the University of Ottawa for the last sixteen years. I can affirm that Burke will have more success at Mado [a drag queen bar] than with the university students that CCO looks to convert.”

During his keynote address at NET Canada’s 20th anniversary gala on Thursday, Cardinal Burke addressed the crisis Western culture is facing, saying it is founded in a failure to recognize and live out the meaning and purpose of the conjugal union.

Burke, recognized by pro-life-and-family leaders worldwide as one of the Church’s foremost defenders of truth, morality, and authentic Christianity, laid out a number of the “most grievous moral evils” that constitute what he called the “disordered moral state in which our culture finds itself.”

Topping the list was what he called the “ever advancing agenda of those who want to redefine marriage and family life to include the unnatural sexual activity of two persons of the same sex […] as if there were a true form of human sexuality other than that intended by God, our Creator and Redeemer, as he has written it in our body and soul.”

Fr. Samson took to Twitter June 4 and 5 to call Burke a “clown” and once more a “drag queen.”

But Fr. Samson did not stop there. In an interview with Radio Ville-Marie on Friday he went as far as calling Cardinal Burke’s statements defending Catholic sexual morality “violent” against homosexuals.

“What he says against homosexuality, I find that violent,” he said in the article that originally appeared in French and was translated by Big Blue Wave.  Radio Ville-Marie quoted Fr. Samson saying that Cardinal Burke’s so-called “violence” not only targets homosexuals in the general population, but is also directed against homosexual priests and bishops.

“He is just as violent towards gay priests and gay bishops, and I find that sad,” he said.

It was two years ago that Fr. Samson declared on the popular TVA television show hosted by Denis Lévesque that he was “gay,” telling Ottawa Citizen last year that he pursued being a Catholic priest as a way to hide his same-sex attraction.

Fr. Samson, ordained in 1984, has a history of courting controversy. Before coming to the Archdiocese of Ottawa, Samson was stationed in the Archdiocese of Montreal where he had a position at St. Joseph’s Oratory. In 2013 he was not only relieved of his duties but removed from the diocese.

While the oratory’s administration refused at that time to comment on the priest’s expulsion, Fr. Samson himself told the Toronto Star in 2013 that he had a habit of refusing to place Holy Communion on the tongue of recipients and that he misspoke the words of absolution during confession. He also admitted to what appears to be an instance of breaking the seal of confession — the sacred duty of a priest to maintain absolute secrecy about anything the penitent confesses — in sharing with his fellow priests during lunch the confession of a young man who told him about suffering sexual abuse by a priest.

LifeSiteNews reached out to Fr. Samson for comment, asking him if his criticism of Burke would not be more aptly directed towards the Catholic Church, from which Burke directly acquires the content of his preaching.

Fr. Samson responded via email: “Are you objective? Are you really interested in knowing my opinion? I feel that you have already judged me and you will not hesitate to call me a bad priest.”

LifeSiteNews also reached out to the Archdiocese of Ottawa, asking if Fr. Samson remained in good standing with the archdiocese, but did not receive a response by press time.

Western culture can’t be renewed until it gets sexual act right: Cardinal Burke in Ottawa