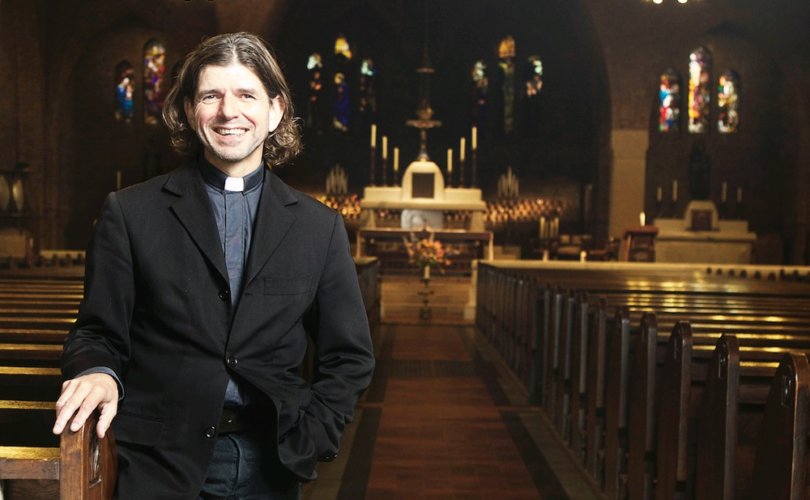 April 5, 2019 (LifeSiteNews) — Pierre Valkering, the Dutch priest who publicly revealed his homosexuality at the end of Sunday Mass on March 31, has given multiple interviews to the  media in which he said he is “on a mission” after Pope Francis himself told him to reach out to the gay community.

“I pay attention to those people. I carry them with me in my heart. I want to tell them that and greet them,” he quotes Pope Francis as having said to him in Rome in 2016.

That was when he presented to the Pope a collection of funeral homilies for deceased homosexuals in the 1980s and 90s of another gay-friendly Dutch priest, Jan van Kilsdonk, that Valkering had compiled during a sabbatical in Rome.

Valkering says that at first Bishop Jozef Punt of Haarlem-Amsterdam was not happy about the theme of his study, but Punt did end up permitting him to leave his Amsterdam parish. While “not amused” by Valkering’s book, the priest says he did receive the bishop’s blessing on his return.

Encouraged by Pope Francis’ words (as he reported them), Valkering decided to accept an invitation to join the “interreligious boat” at the LGBT “Canal Parade” in Amsterdam – the special European edition of the Gay Pride parade in 2016.

“I thought: a field day! I had to do it,” he said. ”This way, I could implement exactly what the Pope asked me to do: to greet gay people. So I said ‘yes.’”

He talked about it with the auxiliary bishop of Haarlem-Amsterdam, even inviting him to join. The answer was “no.” And Bishop Punt ordered Valkering to stay away from the interreligious float, which boasted about the presence of Protestant pastors, both gay and lesbian, Buddhists, Jews and even a gay French imam.

A news report in August 2018 showed Valkering hesitating during the Parade: Would he join the “World Religion Boat?” Would he enter into “resistance” and go on board? Would he just wave them off? Valkering made his irritation clear against his bishop. He explained that he would decide at the last minute: “I’ll leave it to the Holy Spirit,” he said. He finally stayed on land, having abundantly embraced the gay (friendly) religious before they boarded the float.

Such wavering appears to be a part of his character. He says he hesitated until the last minute about publishing his latest book in which he unwraps his dissolute life. Why did he go forward?

“Because I felt called to do it? My existence is about God and Jesus Christ, I live with Him, He speaks in me. I wanted to listen to that deepest voice,” he said. “That which I want to promote with this book is my own healing and that of the Church. The Church is being wrecked by inauthenticity. The Church is acting fake.”

Days before the 2016 parade, Valkering fixed a poster image of his meeting with Pope Francis holding the Van Kilsdonk book and the visible rainbow on it cover, over the main entrance of his parish church, the Vredeskerk in Amsterdam. The word “Welcome” clearly invited LGBT visitors to the Dutch capital to enter the church. At the time, the gay press in the Netherlands explained that the poster was an answer to Pope Francis’ “positive message” that Valkering was supposed to transmit to homosexuals.

“The Pope asked Pierre Valkering (…) to bring over this message and to greet the people concerned. Father Valkering promised to do so. That is why there is a large banner with a picture of the meeting on the Vredeskerk since Wednesday,” wrote rozegolf.net.

While the banner was still up in November 2016, parts of the church tower’s roof crashed to the ground during a storm and the building was temporarily closed.

“In the public news, it’s usually forgotten that Fr. Valkering, on the grounds of previous declarations and publications, had been having talks with the diocese for a longer time. During these talks the bishop explicitly indicated that he didn’t intend to get rid of him because of his orientation, but he did ask him to stick to his promise of celibacy that he made when he was ordained.

“The pastor could also have chosen to talk openly and honestly about his struggles with sexuality and celibacy with the bishop. Such honesty would certainly not have been punished. On the contrary, ways could have been explored with Fr. Valkering to reflect on this and to get help. This has happened in the past with a few other priests.

“However, Fr. Valkering chose for sudden public action, of which the bishop received no prior knowledge at all. Also, in that action, he did not make at all clear whether he would in the future be prepared to remain celibate.”

In an August 2018 interview with the director of Paul Hofman of gay media DeGayKrant – who is Valkering’s official spokesman – Valkering criticized Cardinal Raymond Burke’s statements about the link between homosexuality and sexual abuse in the Church. Valkering is presented in the article as “also a homosexual.”

In his interview with De Tijd, he explained that he fulfilled his promise of celibacy “in his own way.” He sees priestly celibacy as a “religious ideal, a motivator, not an aim in itself.”

“For me it was a positive choice. The choice for Jesus Christ. He is central to my life,” he said. “Every afternoon, I celebrate the Eucharist and every day I make a lot of time for prayer. During discussions, it’s always about celibacy, never about prayer. That alone is already a formidable … distorsion.”

He also complained that the Church favors an “iron discipline.”

“No relationship, no intimate relationship, no sex with other people, not even with yourself. Blood crawls where it cannot flow,” he said, claiming that the Church’s forbidding stance is at the root of sexual abuse on minors.

Using gay activist Frédéric Martel’s technique of insinuation, he described an afternoon at the pool at a religious congregation where he stayed in Rome as a gay event because seminarists were lying about in the sun in shorts: “It was all very innocent, but well, you feel ‘it.’ The famous gaydar.”

During his coming-out speech after Mass in his own parish church, Valkering brandished Martel’s book, Sodoma – In the Closet of the Vatican.

He has admitted to having a long-lasting relationship of 17 years with a gay man named Jasper, whom he sees every Friday evening. For several years, he also spent the night with him, “but that was quite some years ago and it stopped, also because I wanted to pray in church on Saturday mornings.”

Interestingly, in 2013, Valkering wrote a letter to Dutch Cardinal Wim Eijk, who would join the conclave in Rome to elect the new Pope after Benedict XVI. At the time, just after Pope Francis’ election, Valkering talked about his initiative in a TV show, disparaging Pope Benedict’s style and saying it was time for a new kind of Pope – one who would allow people to be “honest with each other” and to “tell each other about the way they live, both within the Church and outside.”

He was enthusiastic about Pope Francis and his words: “Who am I to judge?”

About his letter to Cardinal Eijk, Valkering said, “The cardinal didn’t react, but the Holy Spirit did. We have a fantastic Pope.”