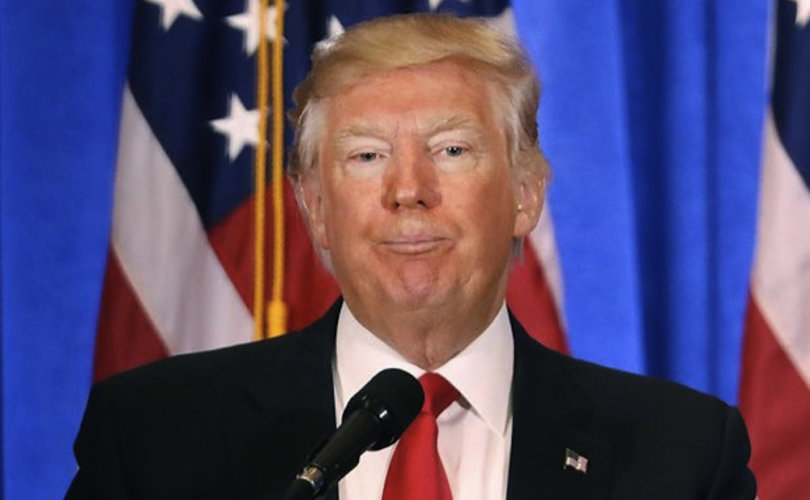 WASHINGTON, D.C., August 11, 2017 (LifeSiteNews) — The Log Cabin Republicans (LCR), which bills itself as the most important insider LGBTQ group in Washington, D.C., has blasted President Trump over his plan to ban “transgender” military service. The group says the ban is akin to the “hateful” former U.S. policy disallowing open homosexuals in the military.

The LCR said the plan “smacks of politics, pure and simple” in a July 26 statement made the same day Trump tweeted out his surprise announcement.

“The United States military already includes transgender individuals who protect our freedom day in and day out,” said the statement. “Excommunicating transgender soldiers only weakens our readiness; it doesn’t strengthen it.”

But President Trump defended his decision this week to reporters in Bedminster, N.J., saying that with the ban he is “doing the military a great favor.”

A Log Cabin lawsuit helped bring down the former prohibition on homosexuals serving in the Armed Forces in 2011.

“As an organization that led the charge against that hateful policy, Log Cabin Republicans remains equally committed to standing up for transgender military personnel who put their lives on the line to keep us free,” the group said.

But a former Army drill instructor says there are good reasons for the military to bar gender-dysphoric people from service, just as it bars individuals who are color-blind or suffer from depression or severe anxiety.

“Guess what? Color blindness disqualifies you from the military. … Are we… ‘discriminatory’ towards color-blind people?” said John Burk in a video.

Edie Dixon, a biological male who identifies as a “transwoman” has also said he supports Trump's decision to ban “transgender” individuals from serving.

The LCR’s criticism of the new ban undermines their pre-election efforts to portray Trump as pro-LGBTQ. One LCR activist even claimed that Trump was more pro-LGBTQ than Obama.

The Washington Examiner reported just one day before Trump’s “transgender” military tweets that LCR officials seemed to be cozying up to the White House.

The group is planning a 40-year anniversary bash at the new Trump Hotel in the nation’s capital. Angelo said the event is a “way to show that we are more relevant than ever,” the Examiner reported.

But Angelo’s statements were made prior to the Trump ban. The group has now switched tactics and, instead of cozying up to the White House, has gone on the offensive.

Since the “trans” ban was announced, LCR has issued a steady stream of tweets attacking the policy as well as the Trump Justice Department’s affirmation of a more traditional interpretation of “civil rights” than that touted under Obama.

Walt Heyer, a former “male-to-female” transsexual, praised Trump’s decision to end “transgender service” in the Armed Forces. In an interview with LSN, Heyer, who through his website SexChangeRegret.com now advises “transsexual” men not to pursue “gender reassignment surgeries,” said Trump’s new policy would prevent “turning the military into a giant, tax-funded, sex-change clinic.”