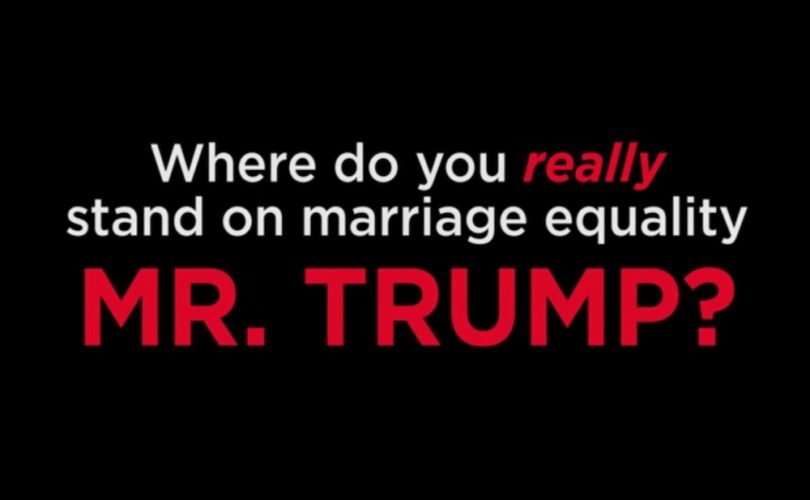 The Log Cabin Republicans, an organization of homosexual members of the GOP, asks Trump to clarify his views on marriage and homosexual issues generally in a new video entitled, “Donald Trump: 'Trust Me.'”

The one-minute video features a montage of video clips of Trump saying that the Supreme Court's Obergefell v. Hodges ruling is “the law of the land” and telling a lesbian journalist “you can” expect more action on the LGBT political agenda if he is elected president in November.

However, it also features video of Trump telling CBN News journalist David Brody that evangelicals can trust him to uphold the definition of marriage in the White House. He went on to say he would only name pro-life justices to the court, and he believed his conservative justices would overturn Obergefell, as well.

“Log Cabin Republicans is calling on GOP frontrunner Donald Trump to clarify his stance on marriage equality,” said the group's president, Gregory T. Angelo, who said he believes that Mr. Trump “has a long record of inconsistency on this issue.”

Trump has opposed redefining marriage since he first commented on the matter more than 16 years ago.

However, in an interview with The Advocate during an earlier presidential run in 2000, Trump told the LGBT website that he would add sexual preference to 1964 Civil Rights Act alongside such immutable characteristics as race and sex. Critics say this would open the floodgates to lawsuits against business owners and others who uphold traditional morality by spurned homosexual employees claiming “discrimination.”

“Trump has never been asked whether he stands by his comments from 16 years ago,” The Advocate wrote this weekend.

During a press conference following results from the Saturday primaries, Trump declined to answer a question on same-sex “marriage” from David Martosko of the Daily Mail.

“In fact, in the past, it seemed as if Mr. Trump would be the most-pro gay presidential candidate in the 2016 GOP field,” Angelo said. “All voters — including especially gay Republicans and allies — deserve to know unequivocally if Mr. Trump would be a friend or a foe to the LGBT community in the White House.”

Correction: This article originally stated incorrectly that the Log Cabin Republicans was the first homosexual organization to co-sponsor CPAC.