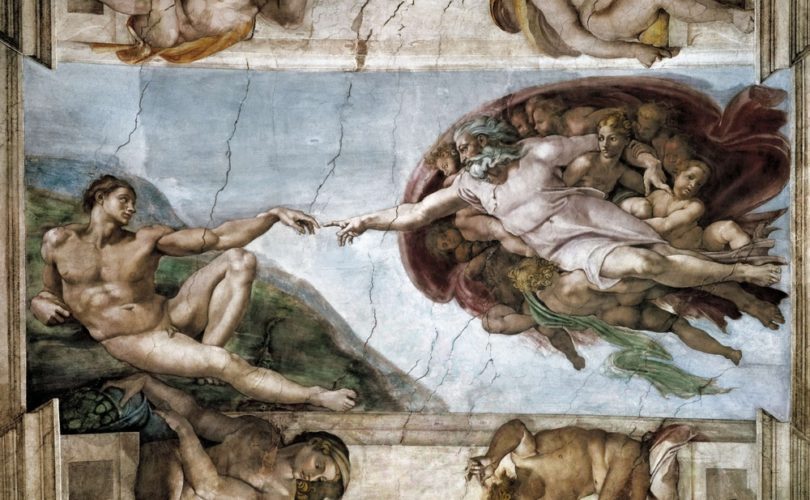 “Gay” tours of Rome’s major sites, including St. Peter’s Basilica and Vatican Museums, have been a feature of the Roman tourism scene for years. Websites offering exclusive “private & gay” guides are easy to find and well-established. While “Luca” the gay tour guide gives little hint on his website as to any particular sexual content in his tours, Quiiky, the Italian gay tourism operator featured recently in the Guardian newspaper, offers clients the chance “to experience gay Rome.”

In the blog post at the Guardian, the UK’s leftist flagship newspaper, Jonathan Jones called the Quiiky tour a “welcome sign of changing attitudes,” in Italy. He states blandly, “Michelangelo was gay,” citing the “copious visual and written evidence about his unconcealed sexual identity.” He goes on to assert that though this is now universally acknowledged, it was once taboo to mention the artist’s pioneering status as a “gay man” before his time, because of the sensibilities of pious Italian Catholics.

“The Catholic church and art historians besotted with religion have for a long time chosen to ignore or deny the sensual side of these artists,” Jones writes.

But Gregory DiPippo, an expert art history tour guide and instructor, licensed by the Vatican Museums, told LifeSiteNews that characterizing Michelangelo as a “gay” man, and some kind of progenitor of the homosexualist ideology in Renaissance Rome, is clearly a matter of propaganda within the homosexualist political movement. In the writings of Michelangelo, which are copious and include many letters and poems, “There is really very little evidence, for him being an active homosexual.”

Indeed, Michelangelo was known as a devout Catholic believer and for his criticism of the immoral lifestyles of other artists. What the rumour depends upon, DiPippo said, are some “very intense” friendships the artist had with other men. “But to use the term ‘gay’ to describe these is certainly to impose a very modern cultural construct about certain kinds of modern lifestyle choices, an ideology really, that cannot be honestly applied to the period.”

Quiiky offers “tours following in the footsteps of ancient great homosexual personalities of the history, such as Leonardo Da Vinci and Adriano [Hadrian] the Emperor.”

But DiPippo said that claiming that Michelangelo and other great artists of the Renaissance are “gay” in the modern sense is “really begging the question, in the true sense of that expression, that is, assuming what you are ostensibly setting out to prove.”

Asked what the administration of the Vatican Museums thinks of Quiiky and other “gay tour” operators giving homosexually themed tours, DiPippo replied, “At a guess, I would say that if they knew about it, they would recognise it for what it is, which is just cheap sensationalism.”

The Quiiky tours offer guides who are “well informed about gay life in the Italian destinations and with a wide knowledge on the private life of the homosexual big names of the past, such as the great artists of the Renaissance, giving you a unique point of view of the art history.”

In their “Gay Marriage” section, the company notes, “Unfortunately, gay marriages are not allowed for the Italian law, although there is a raising movement and a strong pressure on the government to let this happen very soon. Despite that, Italy is open-minded on gay people and many towns and cities would be perfect places to spend a gay travel and feel like you’re home.”

While most outside of Italy still have the mental image of the country as strongly Catholic and family-oriented, the reality is rapidly changing, and the international homosexualist ideology is well-established here and is rapidly gaining legal recognition, including early attempts at public enforcement of its worldview. Quiiky is affiliated with the Italian Association of Gay Tourism and the International Gay and Lesbian Travel Association.

Labeling famous figures of history as “gay” is a favorite pastime of homosexualism’s apologists in media and academia, particularly with those figures who are prominent parts of Christian history or culture. Homosexualists within the Christian churches are at pains to find biblical justifications for the lifestyle, regularly citing King David, who is said to have been homosexually involved with Jonathan, the son of King Saul. Some even go so far as to allege that Christ was sexually involved with St. John.