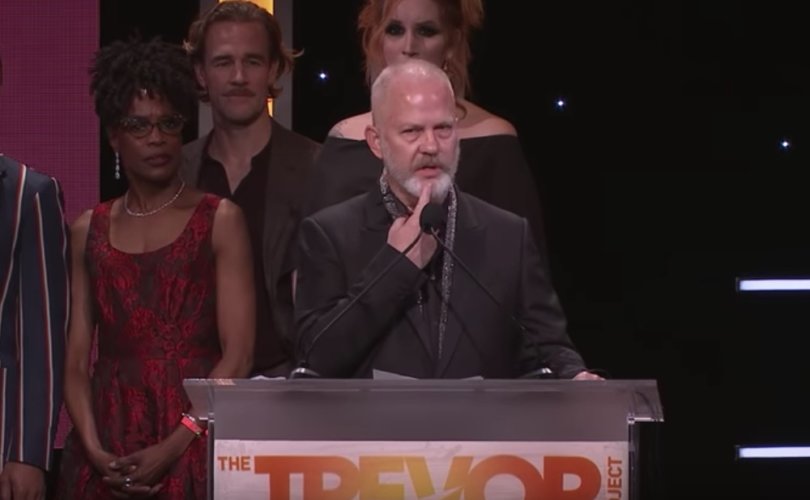 The man behind American Horror Story, Glee, Nip/Tuck, and more announced his latest plans this past weekend during a TrevorLive gala in Los Angeles. TrevorLive is an annual event by an LGBT youth suicide prevention group called The Trevor Project. Murphy’s remarks detailed a far more radical objective, however.

“In 2020, I’m going to create and fund, with corporate sponsorship, a multi-million dollar organization that targets anti-LGBTQ candidates running for office,” Murphy announced, according to Townhall. “Senate and congressional candidates who think they can get votes hurting and discriminating against us – well, we can get votes too.”

Calling the initiative “Pose Gives Back” after his current transgender-heavy show Pose, Murphy singled out Republicans Rep. Steve King of Iowa and Sen. Susan Collins of Maine as examples of “hateful and wrong politicians” he wants to “stop polluting our moral and ethical ether.”

King is an avowed social conservative who has provoked left-wing ire for insisting his fellow Republicans remain opposed to the LGBT agenda. Collins, a pro-abortion lawmaker who has supported same-sex “marriage” since 2014, is a curious target for pro-homosexual activists, though she most recently angered her fellow social liberals by helping confirm Supreme Court Justice Brett Kavanaugh.

Murphy continued that he was inspired to see “over 20 anti-LGBTQ right-wing politicians and their horrifying views gone in a day” in November’s midterm congressional elections.

A record number of LGBT candidates ran for office this election cycle, with the winners including bisexual Democrat Kyrsten Sinema for Senate, homosexual Democrat Jared Polis for governor of Colorado, and lesbian Democrat Sharice Davids for House of Representatives. Democrat “Christine” Hallquist, a man who “identifies” as female, lost to pro-abortion Republican Phil Scott in the Vermont governor’s race.

“We are going to send a message which says you cannot make discrimination against us a political virtue anymore,” Murphy threatened. “You can’t keep killing our vulnerable young people by promoting and nationalizing your rural, close-minded anti-constitutional viewpoints.”

The suggestion that opposing LGBT agenda items somehow encourages homosexual teens to commit suicide is particularly noteworthy, considering that former Trevor Project interim CEO David McFarland admitted in 2011 that activists’ heavy media showcasing of “disproportionate rates of suicide and incidences of bullying that affect LBGT young people” can actually increase the risk of suicide by “influenc[ing] someone who is at-risk to assume that taking your own life is what you’re supposed to do next if you are LGBT or bullied.”

In 2012, a series from Murphy, The New Normal at NBC, was actually barred from at least one TV station in Utah because the homosexual-themed sitcom’s crudeness and explicit content were deemed “inappropriate on several dimensions, especially during family viewing time.”