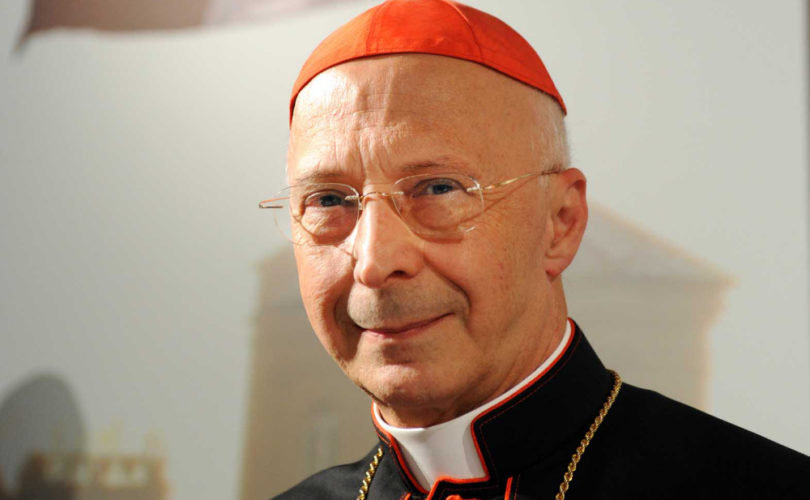 While Italy’s most recent government goes forward with plans to allow same-sex civil unions, the head of the Italian Catholic bishops’ conference has warned that the so-called “compromise” is a “Trojan horse” that will usher in massive changes to the Italian social, cultural, and legal framework.

Cardinal Angelo Bagnasco, long seen as a “conservative” in Italian politics, said at a meeting of the Italian bishops in Assisi on Monday, “It is irresponsible to weaken the family, creating new [legal] figures to culturally and socially undermine the main core of the human person.”

“With the implementation by the municipalities of gay marriage celebrated abroad, we are seeing specious distinctions that have the sole purpose of confusing people and of being a sort of Trojan horse, of classical memory,” Cardinal Bagnasco said in comments quoted by Corriere della Sera.

As the Italian constitution defines it, he said, the family based on marriage is the moral and material “defense of our country,” which “allows people to not feel abandoned and alone in the face of tribulation and anxiety in the present and the future.”

Bagnasco also warned against the habit of activists on this issue to use children as political bargaining chips, saying they are not “objects nor products to claim or dispute [over].” They do not exist to “serve the desires of adults, but are the most vulnerable and delicate [persons who] have a right to a father and mother,” he said.

The cardinal’s words were backed up by an Italian parliamentarian who is promoting a Family Day in opposition to the government’s proposed civil unions bill. Eugenia Roccella, a deputy for the New Centre-Right party agreed that the recent attempts by some mayors to “bypass the law and the Italian constitution by registering same-sex marriages contracted abroad” is a ploy by activists to “confuse public opinion.”

“We cannot but share the observations of the President of the CEI [Italian bishops’ conference], and renew the commitment of the New Center Right party, in government and in the Parliament, in a moment so difficult for families.”

She invited concerned citizens to a rally in Rome on Saturday, November 15, saying, “We invite all those who believe in the family, and want every child to be able to continue to say ‘Mom’ and ‘Dad,’ to demonstrate with us next Saturday, in Rome, with the Family Act. It will be an event open to all movements, associations, groups, civil society organisations acting in different sectors to defend the family, as it is identified by our Constitution.”

Roccella, whose party is a co-sponsor of a pair of bills countering the civil unions legislation, told Zenit news service, “It’s a time when the family formed by a man and a woman, open to procreation, designed so also by the Italian Constitution, at a critical stage.”

She also referenced Italy’s looming demographic crisis, with the birth rate being well below replacement level for decades, saying, “A country that does not have children is also a country where the economic balance does not hold up.”

“Indeed no welfare state can withstand a falling birth rate so dramatic: there is no development without an eye to the future, without new birth,” she added.

She called for parliamentarians to rethink laws on the family instead of focusing on creating quick divorce, “anti-homophobia” and civil unions laws.

She told Zenit that this is the first time in Italian history that the pro-life parliamentarians are not only in a minority, but in an “absolute minority,” which is why she and colleagues formed the New Centre-Right (NCD), which she called small but “significant” in its influence. “If it had not been for us, we would already have a law on homophobia,” she said.

But she said the party alone cannot do what is needed. “We need to mobilize public opinion,” she said. “The current political situation must not remain closed within the [government] buildings but must always keep in touch with the people.”

She called Saturday’s Family Day “an historic occasion for mass mobilization,” to move the public presence of the pro-family movement “outside the institutions.”