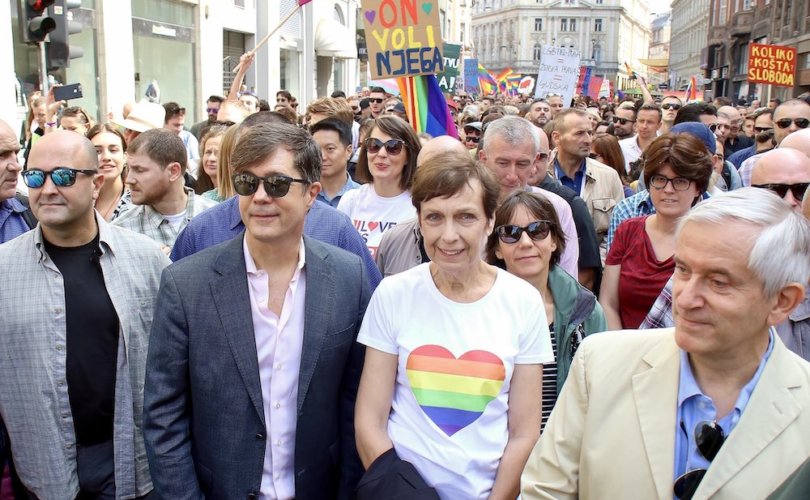 SARAJEVO, September 12, 2019 (LifeSiteNews) – This weekend saw the first-ever LGBT “pride” parade in Bosnia, and U.S. Ambassador to Bosnia and Herzegovina, Eric Nelson, was among the participants.

.@BHpovorkaponosa was fundamentally about equal human rights for everyone. BiH’s citizens came together to reject fear and hate and instead demonstrated to the world that BiH is an open and tolerant country that respects the rights of all individuals https://t.co/dGGQPvGkYp pic.twitter.com/EP3umO4uPz

“The people of BiH came together to reject fear and hate and instead demonstrated to the world that BiH is indeed an open and tolerant country that respects the rights of all individuals,” the statement declared. “The Pride March is fundamentally about equal human rights for everyone. Everyone in BiH – regardless of their sexual orientation or gender identity – is entitled to all the same rights and freedoms. However, the fact remains that vulnerable groups are still suffering. It is everyone’s responsibility to support those who are marginalized and face discrimination and injustice.”

The pro-LGBT Washington Blade reports that organizers estimate the parade saw a turnout of 3,000 people, and that it went off without incident from protestors.

Nelson has been an American diplomat serving in various capacities since the 1990s, and was nominated to his current post by President Donald Trump last year (the Senate confirmed him via voice vote in January). In 1992, he was a founding member of Gays and Lesbians in Foreign Affairs Agencies (GLIFAA), a membership organization dedicated to promoting the interests of LGBT personnel at various federal agencies.

The incident is the latest example of strong pro-LGBT leanings among the U.S. foreign policy establishment, as well as the Trump administration’s mixed record on LGBT issues.

Diplomats have flown rainbow flags at numerous U.S. embassies in recent years, including those of Macedonia, Jamaica, Belize, Israel, and Iraqi Kurdistan. Many other embassies, such as those in Prague and even the Vatican, have promoted homosexual “pride” through a variety of other statements and gestures.

Meanwhile, the Trump administration has moved to prohibit individuals with gender dysphoria from military service, protect women from having to share close quarters such as homeless shelters with men claiming to be transgendered, and define sex based on strictly biological criteria, as well as made religious freedom a priority.

At the same time, Trump has also nominated jurists tied to LGBT advocacy groups to federal judgeships, appointed a variety of pro-LGBT officials to government posts, continued Obama-era pro-LGBT policies such as supporting international recognition of homosexuality at the United Nations Human Rights Council, and declared that same-sex “marriage” is “settled law.”

In June, the administration began denying diplomats’ requests to raise the rainbow banners on embassies’ official flagpoles, a reversal of the Obama administration giving embassies full discretion to fly rainbow flags during “Pride Month,” while continuing to allow embassies to celebrate “LGBT pride” in a variety of other ways.

Diplomats at various embassies have taken full advantage of the loophole, draping LGBT flags on the side of their buildings, displaying the flags inside buildings, releasing photos and videos of embassy staff demonstrating for “pride,” and illuminating the U.S. embassy in New Delhi in rainbow lights. One unnamed diplomat speaking to the Washington Post called it a “category one insurrection.”