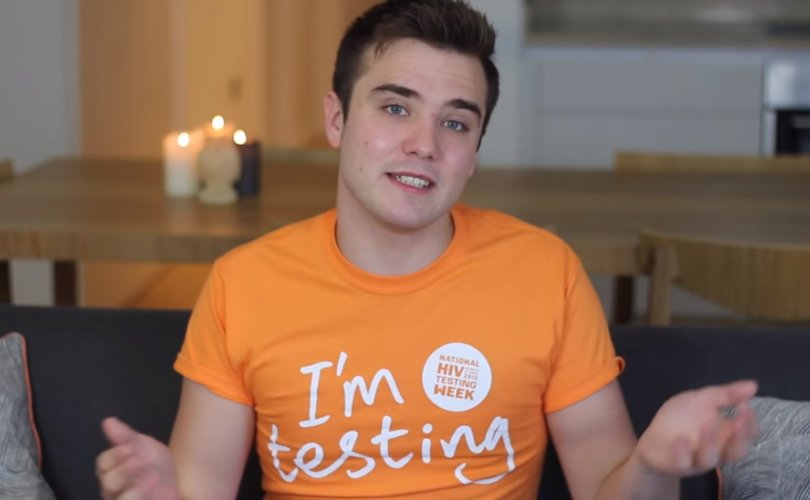 LOS ANGELES, California, October 3, 2016 (LifeSiteNews) — A high-profile gay YouTube personality who claimed he suffered a violent hate crime has been charged with felony vandalism and filing a false police report. He pleaded not guilty to both charges.

In June, Calum McSwiggan reported being assaulted after leaving a West Hollywood nightclub. Police said they “were unable to substantiate the assault,” which McSwiggan says was a hate crime.

The police subsequently arrested McSwiggan for allegedly vandalizing a car.

The police say McSwiggan was not visibly injured at the time of his arrest and he harmed himself with a pay phone in a police holding cell.

McSwiggan admitted to harming himself to get out of the cell but said other injuries on his body — three broken teeth and cuts, scrapes, and bruises on his back — were from being assaulted.

“In a moment of desperation to get out of the cell, I took the pay phone off the wall and hit myself once across the forehead with it as hard as I could,” McSwiggan wrote on his Facebook page. “I knew I had to injure myself to get out of the cell and into a hospital, and it was the only solution I could find to get myself out of there. This is incredibly out of character for me and is testament to how upset I was in that moment. I do not regret doing this as I could still be in the jail cell if I didn't.”

The district attorney’s office alleges that McSwiggan damaged a car mirror and bumper and then falsely reported to police that the car’s driver and two other men attacked him.

If convicted, McSwiggan faces a possible maximum sentence of three years and six months in county jail. There will be a hearing on November 7.

The homosexual news website Queerty reported in July that McSwiggan missed an L.A. Court summons because he was vacationing with his family in Spain.

As LifeSiteNews has previously reported, there have been false claims of “hate crimes” before. These include a lesbian carving a cross into her own chest that police say she did to fake an anti-gay hate crime and a lesbian waitress claiming a family wouldn’t tip her because of her lifestyle (the family later produced their copy of the receipt and their credit card bill, which showed they paid a 20 percent tip).

In 2012, it was revealed that a man who claimed he was the victim of a violent hate crime had actually injured himself doing a backflip.