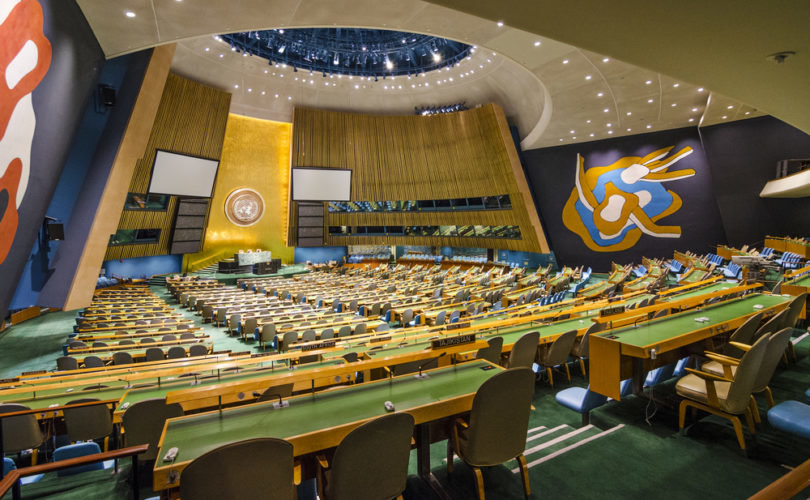 NEW YORK, November 27, 2015 (C-Fam) A paragraph about sex education in a resolution on the rights of children stalled debate in the General Assembly on Tuesday and forced a vote on the resolution, which has traditionally been adopted consensually.

Europeans and Latin Americans sponsoring the resolution could not be swayed, and insisted throughout the weeks leading up to the vote that the resolution on children must contain a specific prescription for “comprehensive evidence-based education on human sexuality,” and no alternative would satisfy them.

Delegations implored the sponsors of the resolution to show “sensitivity” and to recognize the lack of consensus to no avail as they tried to avert the vote altogether.

The resolution did not just use the controversial term. It went further, ostensibly justifying the inclusion of the term “in order to modify the social and cultural patterns of conduct of men and women of all ages.”

The African Group said changing the paragraph with the controversial language was a matter of “principle” and African countries originally sponsoring the resolution withdrew their sponsorship.

Egypt did not only say that comprehensive sexuality education violated their laws, but the UN Charter and the Convention on the Rights of the Child, by threatening the “purity” of children and their “psychological and psychical balance.” Sudan echoed these comments from Egypt and described the issue was “rootless.”

Nigeria objected to an “agenda thrust upon us at every turn” with the intent to “undermine the foundations of our societies and ultimately the family structure.” They spoke of the primary role of the family in the education of children and the need to “sustain their innocence.”

Even India, which normally does not engage in thorny social debates internationally, felt compelled to speak against the sponsors of the resolution.

“The UN should not be forum for propaganda on which there is no consensus,” the Indian delegate said, adding that the resolution went “overboard” because of the hegemonic aspirations implied in the language about modifying societies and cultures through sex education.

Other delegations, including Russia, complained about the absence of discussion on many aspects of education, and the relentless focus on the narrow issue of sex education.

The vote on an amendment to change the offensive term with the more doctrinally neutral terminology “age-appropriate sex education,” was close. 67 countries voted in favor of the amendment, 84 countries voted against it, with 41 countries abstaining or not casting a vote at all.

The resolution overall passed comfortably by 128 votes, but 44 countries abstained, and over 20 countries did not cast a vote at all. Even those voting in favor of the resolution, complained that the sponsors should have accepted the amendments proposed.

The debate on sex education at the UN comes as developed countries, where children have access to information about sex and are widely taught sex education in schools, are experiencing a dramatic increase in sexually transmitted diseases in teenage and college-age populations. In the United States alone the U.S. Center for Disease Control and Prevention estimates that 10 million new sexually transmitted infections occur each year among those aged 15-24.

It is increasingly difficult to estimate the trajectory that the social debates at the UN are taking. Undoubtedly, the vote on the resolution on the rights of the child signals that the debate is here to stay.

Social conservatives should be glad that the controversial terminology that led to the vote on the child resolution was kept out of a resolution on the “girl child” last week. Countries promoting LGBT rights have also failed to include a reference to “sexual orientation and gender identity” in any new resolutions.

Similarly, “reproductive rights” were kept out of a resolution on youth policies this week despite insistence from powerful donor countries. This is especially significant in light of the new UN development goals, and attempts to use them to undermine parental authority in children’s decisions about sexuality.