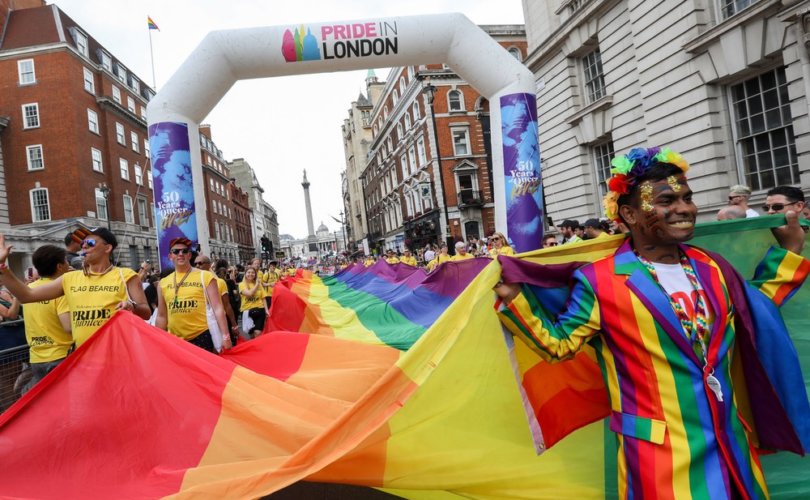 February 28, 2020 (LifeSiteNews) – British television employs people who identify as LGBT on and off-screen in numbers that vastly overrepresent their actual presence in the general population, according to a just-released major industry survey.

In its Diamond: The Third Cut report, the Creative Diversity Network (CDN) surveyed  “over 30,000 diversity forms relating to over 600,000 TV production contributions.”

At 18.1 percent, Channel 5 was found to have the highest percentage of on-screen contributions by homosexuals — nearly three times their 6.4 percent presence in the general population.

Sky was found to have the lowest percentage, but at 7.6 percent it is still significantly above the actual population of homosexuals in the UK.

The on and off-screen contributions of self-identified homosexuals to children’s programming amounts to 12.8 percent and 14.3 percent, respectively.

“People who identify as LGB are represented well across all genres, without exception, both on and off-screen,” the report stated.

The report also further broke down the percentages of homosexuals serving in various production positions. Homosexuals occupy 14.9 percent of all senior production staff, with 20.6 percent acting as producers and a whopping 26.3 percent serving as series producers, more than four times the actual proportion of the homosexual population within the UK.

Information about the on- and off-screen contributions by transgenders is sketchy in the report, with much of it redacted due to low sample sizes.

Surveys taken of the television industry in the United States have reported similar findings.

In its annual report on the state of LGBT representation in television released late last year, the pro-LGBT pressure group GLAAD said, “Of the 879 series regular characters expected to appear on broadcast prime-time scripted programming in the coming year, 90 (10.2 percent) were counted as LGBTQ.”

Prime-time “representation” in the United States is more than double Gallup’s 2017 estimate that 4.5 percent of the U.S. population identifies as LGBT.

Interestingly, the overrepresentation of homosexuals in on- and off-screen positions, and as characters in shows remains lower than what most people falsely believe to be the percentage of homosexuals in the population.

In what is a testament to the marketing acumen of LGBT lobbyists and promoters, U.S. adults, on average, continue to believe that about 25 percent of the population is gay or lesbian, more than five times the actual number.

Overall, a full 90 percent believe in an inflated number, with 54 percent of Americans estimating that gays and lesbians constitute more than 20 percent of the population, according to a June 17, 2019 Gallup poll. Only 8 percent of those polled come close to accurately estimating the LGBT population in the United States at around 4.5 percent.

“Overestimations of the nation’s gay population may in part be due to the group’s outsized visibility,” suggested Gallup at the time, citing a GLAAD report that had found 8.8 percent of prime-time TV characters are LGBT during the previous year.