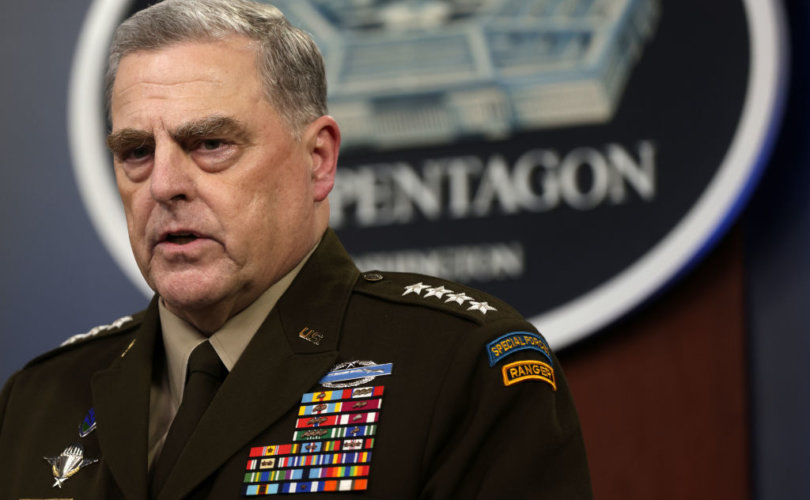 (LifeSiteNews) — Chairman of the Joint Chiefs of Staff Gen. Mark Milley last week responded to allegations that he assured his Chinese counterpart that the U.S. would not strike China without first giving warning regardless of any potential orders by then-President Donald Trump.

The general’s comments come after a statement released by the Pentagon Wednesday which also appeared to substantiate the claims that Milley had made the phone calls which some have argued amount to “treason.”

Speaking to reporters in Europe Friday, Milley said his communications with Gen. Li Zuocheng of the People’s Liberation Army were “routine calls in order to discuss issues of the day, to reassure both allies and adversaries in this case, in order to ensure strategic stability,” the Wall Street Journal reported.

Milley contended that such “routine calls” were “perfectly within the duties and responsibilities of the chairman.”

In his first public comments on the conversations, Gen. Mark Milley told @AP that calls he made to his Chinese counterpart in the final stormy months of Donald Trump’s presidency were “perfectly within the duties and responsibilities” of his job. https://t.co/qA1MUJUJmu

The general failed to confirm or deny a further allegation that he organized a secret meeting after the January 6 riot telling senior military officials to disobey certain orders from Trump unless Milley was involved.

In the statement released by the Pentagon last week, Joint Staff Spokesman Col. David Butler said Milley “regularly communicates with Chiefs of Defense across the world, including with China and Russia.”

“These conversations remain vital to improving mutual understanding of U.S. national security interests, reducing tensions, providing clarity, and avoiding unintended consequences or conflict,” he added. “His calls with the Chinese and others in October and January were in keeping with these duties and responsibilities conveying reassurance in order to maintain strategic stability.”

Dan Gainor, Vice President of Free Speech America, Business and Culture for the Media Research Center, told LifeSite in an email Thursday that while “[rational] people should always suspect the accuracy of Woodward’s reporting [in his new book Peril], the Defense Department responses haven’t done anything to convince the public that the story was inaccurate.”

“If Milley wanted to really deny it, he would have,” said Gainor.

“He hasn’t,” Gainor added. “He simply said all of his contact was part of his job.”

Gainor said the statement issued by the Pentagon on behalf of Milley “sounds like a classic Washington non-denial denial.”

“In other words, it sounds like the story is true. If so, then the head of our military tried to undermine the president of the United States and aid one of our enemies. And, incidentally, Milley’s on record denying that the genocidal nation of China is even our enemy.”

“He has to go,” Gainor concluded.

Former President Donald Trump has argued that Milley overstepped his authority by “going behind the President’s back” and suggested that the general be tried for treason.

In a September 15 statement, Trump added that Milley’s assurances to the communist People’s Liberation Army endangered the United States.

“Milley never told me about calls being made to China. From what I understand, he didn’t tell too many other people either,” Trump said.

He argued that Milley “put our Country in a very dangerous position” and suggested that “[t]he only reason Biden will not fire or court-martial Milley is because he doesn’t want him spilling the dirty secrets on Biden’s deadly disaster in Afghanistan.”

As reported by Axios, the controversy began after excerpts were released from a new book entitled “Peril” written by journalists Bob Woodward and Robert Costa.

The excerpts indicated that Milley acted due to alleged fears that President Trump would “go rogue” and that the president was suffering “serious mental decline” in the wake of the 2020 election.

Milley also allegedly conducted a secret meeting with senior military officials in the Pentagon, advising them not to take orders from President Trump unless he was involved in the conversation.

Per Axios, “[o]n Jan. 8, Milley called senior military officials in charge of the National Military Command Center to a secret meeting in his Pentagon office. There, Milley ordered those present not to take orders unless he was involved.”

“‘No matter what you are told, you do the procedure,” Milley allegedly told military officials, according to the book. “You do the process. And I’m part of that procedure.”

As reported by the Daily Wire, Milley is set to testify under oath before Congress on September 28.

In a comment delivered via a spokesman, Milley indicated he would be open to responding to questions pertaining to his phone calls to Gen. Li Zuocheng during the hearing.

However, according to the report, the questioning will be primarily centered on Milley’s “role in coordinating the United States’ swift departure from Afghanistan and his efforts to advise the Biden administration on whether to abide by a departure timeline” established by the prior administration.

“I think it’s best that I reserve my comments on the record until I do that in front of the lawmakers who have the lawful responsibility to oversee the U.S. military,” Milley said. “I’ll go into any level of detail Congress wants to go into in a couple of weeks.”

The blowback from Milley’s alleged actions have led to demands that he be investigated for treason.

As reported by The Federalist, retired brigadier general Rep. Scott Perry along with 26 other Republican legislators drafted a letter to Defense Secretary Lloyd Austin “asking him to conduct an … investigation into Gen. Mark Milley’s potentially treasonous phone calls.”

For the security of our Nation, @secdef must formally investigate Gen. Milley. He now has a letter demanding a formal Article 15-6 Investigation. No matter how many stars are on your shoulders, you’re never above your oath to support and defend the Constitution. #MarkMilley pic.twitter.com/bJUoAFQ9Oa

President Biden has since publicly defended Milley, saying he has “great confidence” in the general.