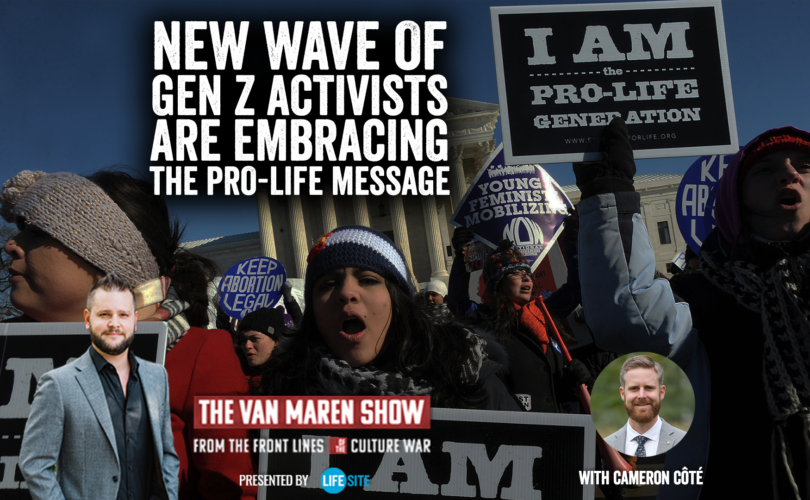 (LifeSiteNews) – In this week’s episode of The Van Maren Show, Jonathon speaks with Cameron Côté, a pro-life activist with the Canadian Centre for Bio-Ethical Reform and co-host of the podcast The Pro-Life Guys. They discuss why more and more young people are becoming pro-life and how they’re effectively changing people’s hearts and minds on abortion.

Côté has worked full-time in the pro-life movement for 10 years, ever since he left academia to advocate for the unborn and train young people. He tells Jonathon how pro-life advocacy on campus many times results in assault by pro-abortion groups, who throw feces and stink bombs at them, and also steal the students’ property.

“When the pro-abortion movement is so polarizing like that, it shows just how normal pro-lifers really are,” he said.

Côté points out that pro-abortion activists never win through argumentation, but rather, resort to violence and attempts to shut down debate on the issue. “All they have on their side is brute strength, arguably to prevent people from interacting with pro-lifers, since the more people interact with pro-life groups, the more often they become pro-life themselves.”

Regardless of these problems, Côté reveals that Generation Z is waking up to the evil of abortion and is wanting to speak up for the innocent and voiceless unborn. He discusses “a new wave of pro-lifers who are effective in changing people’s minds on the issue.”

To learn more about Cameron Côté and his podcast The Pro-Life Guys, click here.