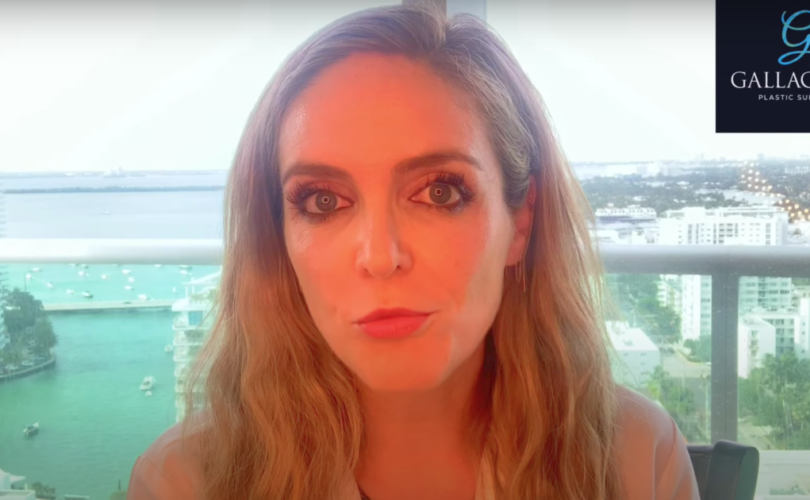 MIAMI (LifeSiteNews) – A picture posted to Instagram by a Miami-based “gender affirming” plastic surgeon with one of her clients went viral over the weekend. The picture was apparently taken after a double mastectomy of healthy breasts.

The image shows Miami-based plastic surgeon Dr. Sidhbh Gallagher and a young girl in front of a sign that reads “Be yourself.” The picture was apparently taken shortly after Gallagher performed a double mastectomy on the girl’s breasts. The image has a caption that reads “That Smile!! Congratulations!”

A screenshot of the image, which Gallagher originally posted to Instagram, was posted to Twitter by Seth Dillon, CEO of the Babylon Bee late Saturday. “Doctor poses for a picture with the child she just mutilated,” Dillon tweeted. The age and identity of the girl is unknown.

Doctor poses for a picture with the child she just mutilated. pic.twitter.com/K6Z0f3yh9M

Dillon’s tweet has received thousands of comments, likes, and retweets, the Daily Wire reported. One comment, by Chad Felix Greene, a contributor to The Federalist, reads “Layers of tragedy. A young girl convinced to hate her body and only feel joy at removing her femininity.” “She’ll never find peace,” Greene continued.

Layers of tragedy.
A young girl convinced to hate her body and only feel joy at removing her femininity.
She’ll never find peace. Always performing pride but desperate for validation.
She’ll become angry, bitter and hostile, only finding purpose in victimhood.
Endless pain.

Another comment by Kurt Schlichter, a columnist for Townhall, reads “This is horrible. Outlaw mutilation.”

Florida Surgeon General Joseph Ladapo and the state Department of Health (DOH) released guidance in April explaining the harms from the chemical and genital mutilation of children.

Ladapo and the DOH memo pointed to “a lack of conclusive evidence” for “gender transitioning” and “the potential for long-term, irreversible effects.” The state also noted a review of hormonal interventions “show a trend of low-quality evidence, small sample sizes, and medium to high risk of bias.”

Ladapo also sent a letter to the state medical board in early June, urging the body to draft stricter rules for “gender transitions” among Florida youth.

The letter followed a report by the Florida Agency for Health Care Administration (AHCA) that, in addition to stating that Florida’s Medicaid program should not be used to pay for “transgender” treatments, said “the available evidence demonstrates that [“transgender” treatments] cause irreversible physical changes and side effects that can affect long-term health,” it adds, pointing to the likelihood of infertility or sterility as a result of cross-sex hormones and “sex reassignment” surgeries.

In July, former transgender Chloe Cole, who took puberty blockers starting at 13 and had her breasts removed at 15, warned of the “irreversibl[e]” damage from her “transition” during hearings related to Florida’s Medicaid rules.

Gallagher has a history of providing minors with “transitional” surgeries. In 2021, it was reported that she performed a double mastectomy on a 13-year-old. In a social media post made in 2020, Gallagher stated that she performed 22 mastectomies in one week, the Post Millennial reported. She offers “gender affirming” care to minors with the consent of the parents and a mental health professional, her website states.

Dr Sidhbh Gallagher has performed mastectomies on healthy 13-year-olds and celebrates the “gender euphoria” in her office. pic.twitter.com/qZJP0Jgmaz

LifeSiteNews reached out to Gallagher’s office for comment but has yet to receive a response.

LifeSite has begun to compile a list of stories, data, and statements from credible medical officials detailing the dangers of puberty blockers and “transgender” surgeries.