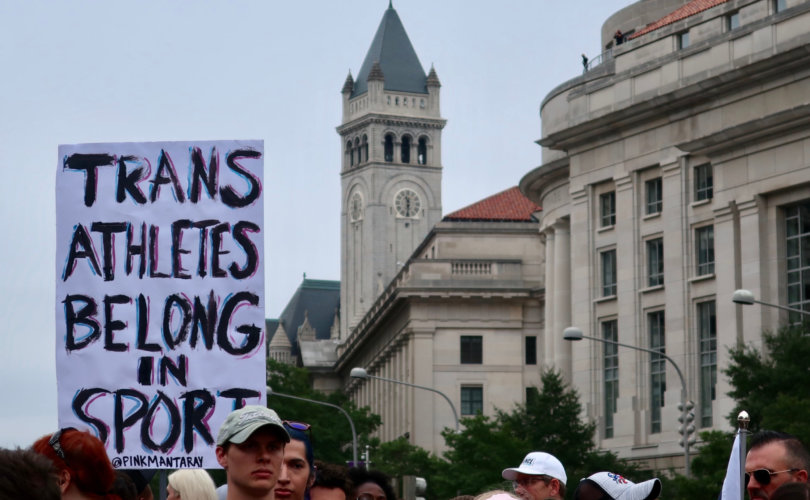 House Bill 500 forbids “transgender females” – i.e., males who “identify” as female – from competing against actual females in school athletic events. If a student’s “gender identity” is disputed, the school may settle the matter with a physical and genetic examination.

House Bill 509 forbids altering the sex listed on state birth certificates in the name of “gender identity.” Changes would only be allowed in order to correct errors in “material fact at the time of birth,” or to correct a “clerical or data entry error.”

“Thank you Idaho for having the wherewithal to stand up and not allow boys to compete against girls,” Yakima city councilman Jason White wrote in response to the news. “I’m all for identifying however you please. Heck, my hybrid Honda identifies as a Pruis and I’m OK with that, but it’s still a Honda.”

Transgenderism in athletics is a contentious issue across the country, with female athletes arguing that biological males’ innate physical advantages unjustly impair their ability to earn not only competitive recognition, but also scholarships for their hard work.

Last June, the Journal of Medical Ethics published a paper concluding that “healthy young men (do) not lose significant muscle mass (or power) when their circulating testosterone levels were reduced to (below International Olympic Committee guidelines) for 20 weeks,” and “indirect effects of testosterone” on factors such as bone structure, lung volume, and heart size “will not be altered by hormone therapy.” Therefore, “the advantage to transwomen (men) afforded by the (International Olympic Committee) guidelines is an intolerable unfairness.”

Meanwhile, critics claim the birth certificate bill defies a 2018 court order forcing Idaho to grant requests for sex changes on birth certificates. Idaho Senate Democrat Minority Leader Michelle Stennett complained that it is “unconstitutional and will cost the state a lot of money in court because it could go to the U.S. Supreme Court.”

In fact, the Constitution contains no language that could be construed as dictating the record-keeping policies of state governments. But that won’t matter if the LGBT lobby convinces the Supreme Court to reinterpret the 1964 Civil Rights Act’s ban on sex discrimination (which was meant strictly as a biological concept by the law’s drafters) as extending to subjective “gender identity.”