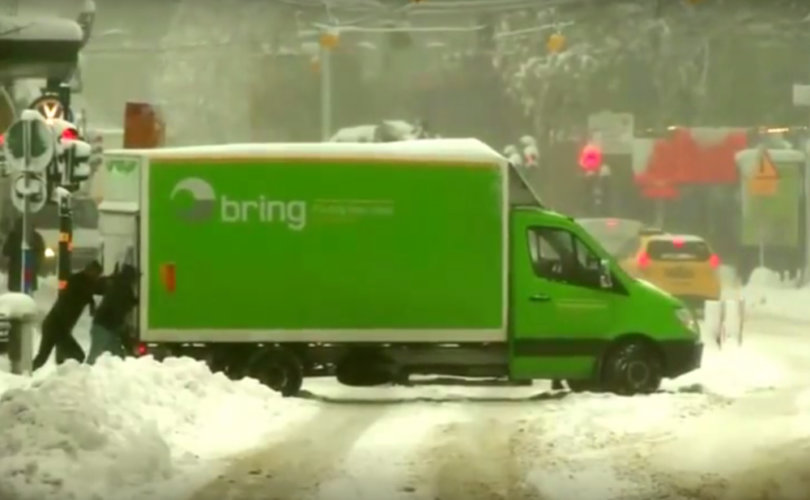 The biggest snowfall in 111 years proved the first real test for the “feminist” or “gender-equal” snow removal policy brought in by a new municipal council controlled by a Left-Green coalition.

The city government is intent on putting as much civic energy into clearing bike paths and sidewalks used by environmentally- and fitness-minded women as into the roads frequented by male-dominated motor vehicle traffic.

But chaos reportedly was the result for both genders, according to the tabloid Aftonbladet’s headline, “Feministisk snöröjning funkar inte i Stockholm,” (“Feminist Snow Removal Flunks in Stockholm.”)

Buses (also, it turns out,  heavily used by women) were stuck by the hundreds on roads blocked by stalled cars. Light rail trains moved at half speed, forcing  stranded commuters to walk for hours to get home from work, slipping and falling on glasslike sidewalks and bike paths. Others stayed home with children as schools shut down.

Daniel Helldén, a Green Party member who is vice mayor for traffic, was quick to blame the record snowfall (15 inches in a day) rather than the new policy. “Gender-equal snow cleaning is not to blame here,” he told the Expressen newspaper, claiming that the policy had apparently not been followed.

“There is a lack of gender equal snow-clearing now, according to the reports I’m getting,” he said. “It’s still difficult to walk on the pavements — and it is important that snow-clearing prioritizes walkways, public transport and cycle paths.”

He explained the rationale for gender-equal snow removal: “It hurt more when you fall when walking and cycling, while those who drive are comfortable no matter whether it’s snowing. It is about three times as many pedestrians who are injured than motorists in weather like this. … But there is also an accessibility argument that the city should be accessible to all. Snow and ice keeps many at home. Above all, it affects women who increasingly are walking and cycling more than men.”

Fredrik Antonsen complained on his Iotakt blog : “The Green Party's policies — whether it's about energy, security and defense, schools or snow removal — is a policy that does not work when reality intrudes on it. The Green Party is a party that dreams, that is so naive it hurts. Yesterday's snow chaos had been difficult without the Green Party's ideas, but became even harder when the ideas became reality.”

Sweden had an incident in 2012 when a (male) Left Party city councillor in Sormland drew amused comment from around the world for proposing all-male users of city hall washrooms sit to urinate. This would prevent anyone having to walk through the unhygienic puddle created by bad male marksmanship and also ease pressure on the prostate gland.

The idea went further to reportedly include Swedish day care centers teaching young boys to urinate seated, feminists in Belgium and France promoting the concept, and Germans making a talking toilet that ordered men to sit and threatening those who didn’t with fines.