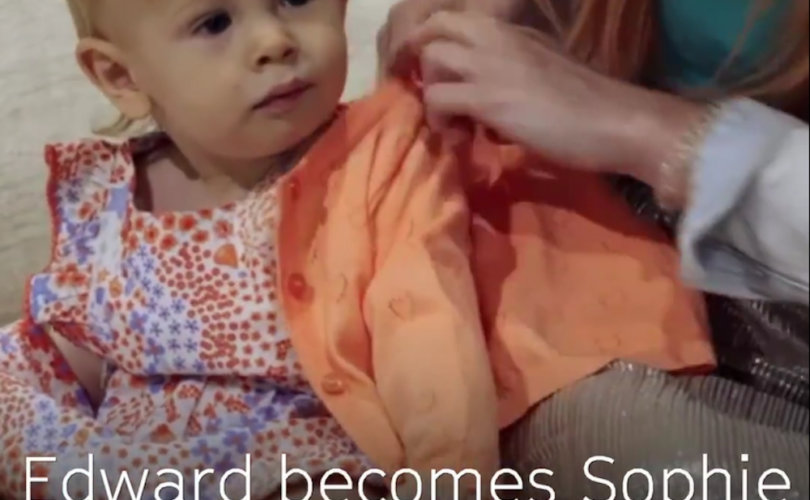 ISLE OF WIGHT, England, August 21, 2017 (LifeSiteNews) — Nature or nurture? A new BBC series starts with an “experiment” implying that boys become masculine and girls become feminine solely because of outside influences.

“No More Boys and Girls: Can Our Kids Go Gender Free?” espouses to expose gender stereotypical adult treatment of boys and girls. Its conclusion is revealed in the series’ subtitle: “Is the way we treat boys and girls the reason we haven’t achieved gender equality?”

Dr. Javid Abdelmoneim attempts to prove that “boys and girls are shaped to be different.” He advocates for “gender neutral treatment” under the assumption that “true equality” means sameness.

In two television programs, Abdelmoneim embarks on an experiment with toddlers. His aim is “to remove all differences in the way boys and girls are treated.”

He puts the boys in pinkish dresses and the girls in blue pants and shirts and renames them. He then has adult volunteers engage in play with the toddlers, and videos their interaction. He notes how most adults treat those they think are boys, such as encouraging them to play with little trucks and the like. Those the volunteers think are girls are encouraged to play with dolls.

Thec Lanesend Primary School children innocently interact with the adults and take what is given to them to play with.

Abdelmoneim asked, “Could stripping away the pink and blue — and the other more subtle ways that boys and girls are shaped to be different — be the way to raise kids with abilities and attitudes that are the same regardless of their gender?”

(Note: Abdelmoneim assumes that males and females having “the same … abilities and attitudes” is good for them and for society.)

“What the program describes as ‘gender equality’ is no more than egalitarianism poorly defined,” Father Johannes Jacobse, president of the American Orthodox Institute, told LifeSiteNews.

His analysis of a clip from Abdelmoneim’s program notes two assumptions that form the foundation of this “experiment:” 1) differences between men and women are simply a matter of social conditioning, and 2) therefore, teaching parents not to differentiate between a boy and a girl will improve the world by eliminating gender differences.

“But what if boys and girls differ because of nature?” Jacobse asked.

“Previously, natural differences between boys and girls were self-evident by looking at their bodies,” Jacobse observed. “However, in the new egalitarian world the male and female are no longer markers because it doesn’t fit the egalitarian vision,” not because they aren’t real.

In the modern, post-Christian West, “masculine” and “feminine” have become “fluid,” Jacobse explained. “The concreteness of the body is out; whatever one feels oneself to be is in,” he observed. “As a result, there now are some 20-25 ‘genders’ by the latest count.”

Jacobse suggested that perhaps Abdelmoneim, while proclaiming to strive toward “gender neutrality” and objectivity, is actually the one doing the social engineering to further a secular, utilitarian worldview and a false, cookie-cutter “equality.”

“What if we’ve got it all wrong?” Jacobse asked. “What if the reason boys’ toys differ from girls’ toys is because nature declares that boys and girls really are different?”

Jacobse admits the politically incorrectness of his observation. “In our time, this statement is tantamount to heresy because it strikes at the heart of the egalitarian project.  It brings — dare we say it? — common sense back into the discussion and wipes away the increasing confusion some parents display when they consider chemically ‘changing’ their boys into ‘girls’ and vice versa.”

In answer to Abdelmoneim’s theory, Jacobse concedes that boys and girls are shaped in gender specific ways by those around them. “The question put forward is if masculinity and femininity is taught,” he summarized. “Of course they are. We’ve been teaching boys how to be boys and girls how to be girls for most of Western history. It’s only the last few decades that the egalitarian project has gotten any traction.”

Then he addressed the presumed negative stigma of gender “stereotyping.”

“Maybe the reason our cultural practices developed that way is because it actually conforms to nature,” Jacobse theorized. “It reflects things the way they really are.”

Jacobse then critiqued the agenda behind Abdelmoneim’s efforts. “The egalitarian project is really a kind of moral crusade,” he said. “The promise of a world without distinctions between male and female. But like so much social engineering that has already been tried, we must be very wary of promises that seek to alter and eventually dominate nature. They never work. Nature always wins in the end.”

“Is chemically castrating a boy before puberty, or giving male hormones to a young girl a good thing?” Jacobse challenged. “Should we sacrifice children to the cause? Nature and history say no, don’t do it.”

“These are babies in this video; they are more concerned with just being loved than the toys around them. So really this video isn’t about them at all but the adults,” Emily Hope Horn pointed out. “As a mother of four, I wouldn’t say these adults are stereotyping babies. How ridiculous. It is my maternal instinct to raise our daughter to be a woman and my husband’s paternal instinct to raise our sons to be men.”

“I want my sons to be gentlemen and my daughter a lady,” Horn added. “What (Abdelmoneim is) really trying to do is rewrite the genetic code, (but) you can’t control nature over nurture.”

“This is just an attempt to train adults to deny their own obvious understandings of identity,” Facebook commenter Fr. John Peck charged.

Several posters agree. “The concept of being gender-free seems impossible for a human,” one argued, and another accused Abdelmoneim of “denying biological facts.”

Others were upset that Abdelmoneim used the impressionable children to further his agenda. “You don’t ‘experiment’ with a child,” one commenter posted.

Nick Smith stated, “I stereotype (and) I’m proud of it. My Dad wanted me to be a boy and I wanted my sons to be boys,” he wrote. “What they have done here, dressing children up as the opposite sex, is quite decidedly deranged, in my opinion.”

Smith concluded, “Thank God for the differences. I don’t want to live in a homogenized world where we are all the same.”