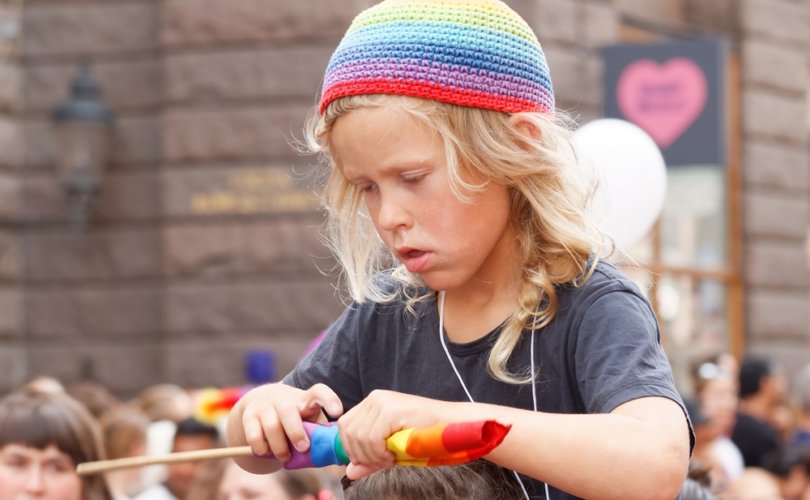 A Swedish boy at the Stockholm gay pride paradeshutterstock.com

SWEDEN, March 26, 2018 (LifeSiteNews) – Many government-funded Swedish preschools are “gender-neutral” and teach youngsters to reject their natural inclinations toward masculine or feminine activities, instead requiring them to do activities usually associated with the opposite sex.

“A preschool’s approach to gender has now become a common question before enrollment,” the New York Times reported in a profile of these schools. Swedish teachers “are doing what they can to deconstruct” gender.

Schools go about this in different ways, largely based on their leadership. Many Swedish children begin going to these programs when they are just one year old.

At the dawn of this massive social experiment, “Boys and girls at the preschools were separated for part of the day and coached in traits associated with the other gender. Boys massaged each other’s feet. Girls were led in barefoot walks in the snow, and told to throw open the window and scream.”

Now, preschools use a variety of techniques to eliminate gender from the classroom, and make girls act like boys and vice versa. They prevent kids from playing only with other boys or girls. Boys are sent to a play kitchen while girls practice shouting “No!” Preschools now have “gender specialists” on staff who can address problems like boys refusing to paint or dance, or students drawing eyelashes only on female subjects.

Boys may wear dresses, and the teachers celebrate when little girls become less feminine. A three-year-old boy named Otto has never heard from anyone, including “his grandparents, or babysitters, or fellow 3-year-olds,” that boys don’t wear dresses. His mother “would like this to continue as long as possible.”

One teacher celebrated how their lessons changed a “very girlie” girl into one whose parents complained she was “cheeky and defiant at home.”

A 26-year-old aspiring teacher in Sweden told the New York Times she “gets upset” when she sees her friends’ babies dressed in blue and pink. It feels like a “responsibility” for her to tell them that by dressing girls in pink and boys in blue, they are making a “mistake.”

The complete “de-sexing” of society will lead to much more powerful governments, former intelligence analyst Stella Morabito has repeatedly written as the transgender craze has taken off.

“If you abolish sex distinctions in law, you can abolish state recognition of biological family ties, and the state can regulate personal relationships and consolidate power as never before,” Morabito explained in Public Discourse in 2016.

In a society de-sexed by law, would the state recognize your relationship as a husband or a wife? Mother or father? Daughter or son? Those are all sexed terms. A system that does not recognize the existence of male and female would be free to ignore the parentage of any child. You might be recognized as your child’s “legal guardian,” but only if the state agrees to that. Anybody can be a guardian to your child if the state decides it’s in the child’s “best interest.” In this vision, there is nothing to prevent the state from severing the mother-child bond at will.

In such a scenario, the state controls all personal relationships right at their source: the biological family. The abolition of family autonomy would be complete, because the biological family would cease to be a default arrangement. The “family” would be whatever the state allows it to be. Again, in the de-sexed world of gender politics, all personal relationships end up controlled and regulated by the state.

There have been “occasional protests” from “traditionalists” to gender-neutral preschooling, according to the New York Times, but Sweden’s two biggest political parties support it.