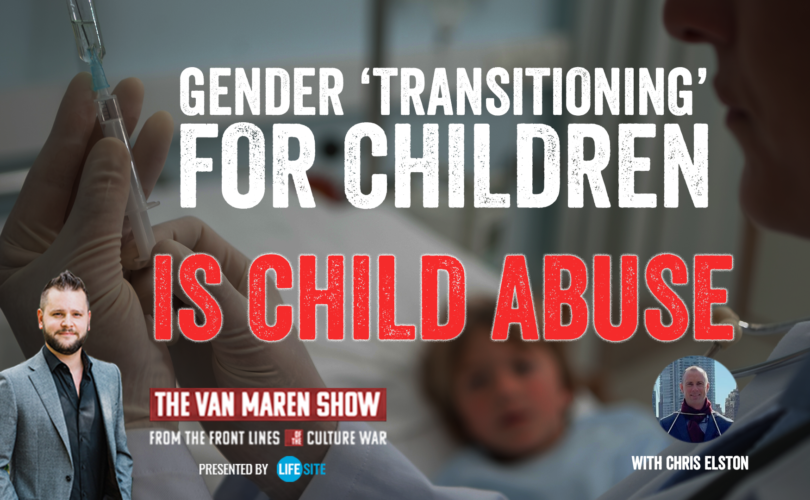 April 7, 2021 (LifeSiteNews) — Chris Elston, an activist for children against gender “transitioning,” joins The Van Maren Show today to expose the terrible effect puberty blockers have on young people. Last year, Elston gained notoriety for commissioning a billboard in Vancouver, Canada, that read, “I love J.K. Rowling.” Prior to that, the popular author of the Harry Potter books was attacked by the transgender lobby.

Elston tells Jonathon Van Maren that there’s a wide-scale promotion of gender “transitioning” in Canada from the government, schools, and media. He calls it “the biggest child abuse, medical scandal, probably in our history.”

He also says that a bill currently passing through the Canadian legislature and government will ban so-called conversion therapy, thus creating confusion by pushing the LGBT lie that our sexual identity is “fluid” and changes all the time.

Elston further mentions how his activism in recent years has led to targeted attacks from transgender activists, politicians, and liberal extremists. He describes how he was kicked out of NDP campaign headquarters for not creating “a safe space” because he was talking about sending biological male sex offenders into women’s prison.

Elston states that gender “transitioning” for children must be put to a stop “before too many thousands of kids get hurt.” He highlights how puberty blockers and other methods destroy and damage the lives and bodies of young people. He believes that the only effective way to stop the LGBT agenda is through personal and public activism, especially talking to parents and explaining to them how their children’s schools are indoctrinating them.