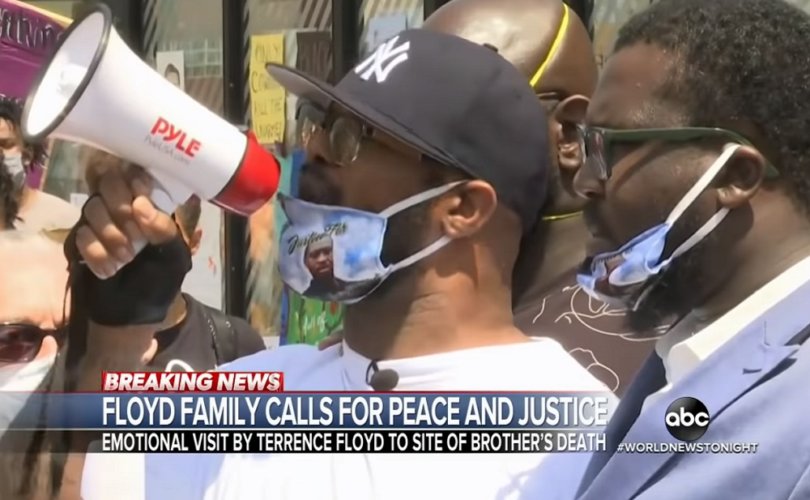 MINNEAPOLIS, Minnesota, June 1, 2020 (LifeSiteNews) — Terrence Floyd called for an end to the violent activism and riots that have erupted across the United States after the alleged murder of his brother George Floyd, saying his brother wouldn’t condone such actions and that they won’t bring him back.

Instead, black Americans should respond to police brutality by getting politically involved, Floyd told the crowd gathered at the makeshift memorial marking the site of his brother’s death.

“Let’s do this another way. Let’s stop thinking that our place don’t matter, and vote. … Let’s switch it up, do this peacefully, please,” he said.

Floyd made his remarks when visiting the site in Powderhorn, a neighborhood south of downtown Minneapolis where 46-year-old George Floyd died May 25 as white police officer Derek Chauvin knelt on his neck while he lay handcuffed on the ground.

The viral video of Floyd’s death, which recorded him crying, “I can’t breathe,” sparked peaceful protests against racism and police brutality, as well as riots, vandalism, arson, and assaults in cities across the United States.

Those who knew Floyd insist he wouldn’t condone the violence, a view Terrence Floyd reiterated.

“I understand you all are upset,” Floyd said. “I doubt you all half as upset as I am.”

“You all doing nothing, because that’s not going to bring my brother back, at all[.] … It may feel good for the moment, just like when you drink, but when you come down, you’re going to wonder what you did.”

Floyd said his family is upset but is “peaceful and God-fearing” and is “not going to be repetitious” by imitating what took place after “every case of police brutality” — which is violence and the destruction of property that have not made any difference.

“So let’s do this another way,” he said. “Let’s stop thinking that our place don’t matter, and vote.”

He encouraged people to vote, not just for the president, but in all levels of government and to “educate yourselves and know who you are voting for” rather than relying on others to tell them whom to vote for.

“And that’s how we’re going to hit them, because it’s a lot of us,” Floyd said to cheers.

Other sources have described George Floyd as a man of peace who helped pave the way for Christian missionaries in his old neighborhood in Houston, where he lived most of his life.

The father of two daughters, Floyd left Houston to find work in Minneapolis, where he worked as a truck-driver and a bouncer, most recently at Conga Latin Bistro.

He allegedly passed a counterfeit $20 bill at the Cup Foods convenience store the day he died. Co-owner Mahmoud “Mike” Abumayyaleh told the media Floyd was a regular customer who had never caused trouble before. Abumayyaleh was not in his shop when Floyd came in to buy cigarettes. He says a teenage employee called the police after Floyd refused to give the cigarettes back.

On the transcript of the 911 call, the teenager told a dispatcher that Floyd was  “drunk,” “not in control of himself,” and sitting on a blue van parked outside.

Abumayyaleh said his nephew and a black female employee went outside to remonstrate with the police officer kneeling on Floyd’s neck. He said also that he had viewed his shop’s security footage and could see that Floyd had not resisted arrest.

Chauvin, 44, was fired and charged with third-degree murder and second-degree manslaughter.