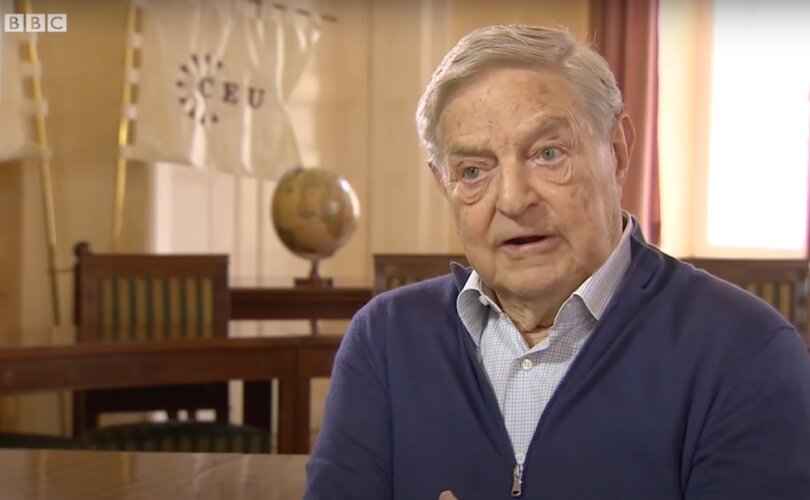 (LifeSiteNews) — Well-known leftist “philanthropist” George Soros has spent a soaring $21 billion to back left-wing political groups and individuals since 2000, according to filings viewed by the Washington, D.C.-based conservative nonprofit Capital Research Center (CRC).

CRC investigative researcher Hayden Ludwig reported on January 4 that Soros channeled the funds through his “nonprofit empire” over the span of more than two decades.

In 2021 alone, the 92-year-old billionaire injected $2.7 billion into left-wing causes, according to the report.

“He has made no secret of his goal of using his enormous wealth — earned in capitalist markets — to reengineer the country in his own image,” Ludwig wrote. “In practice, that involves funneling six- and seven-figure grants to professional activists pushing policy and electing Democrats in the name of ‘charity.’”

George Soros has funneled $21 billion into left-leaning politics since 2000 https://t.co/uIoOxHErDW

According to the report, the Soros Network (also known as the Open Society Network) encompasses a variety of lobby groups and foundations that all receive their funding from Soros.

Radical advocacy groups that received funding from Soros have worked to advance leftist policies in the arenas of racial and sexual identity politics, illegal immigration, the loosening of election laws, and abortion access.

Soros has also spent tens of millions to back political figures who will implement radical policies in the real world, including progressive district attorneys who have slackened criminal prosecution standards in the interest of “social justice.”

In addition, Soros has bankrolled the elections of dozens of state and local prosecutors who refuse to enforce pro-life laws, and donated to pro-abortion groups in left-wing states set up to help women from pro-life states travel to kill their preborn children, LifeSiteNews previously reported.

During last year’s midterm election cycle, Soros’ Open Society Policy Center (OSPC) gifted $4.5 million to pro-abortion political action committee Reproductive Freedom for All, which was established to support Michigan’s initiative to enshrine abortion into the state constitution in the aftermath of the overturn of Roe v. Wade.

In company with several other statewide pro-abortion ballot measures that were proposed last year, Michigan’s initiative was approved by a 56.66% majority.

In its January 4 report, CRC pointed out that the reported spending from Soros’ fleet of left-wing nonprofits and lobby groups is likely “just the tip of [the] iceberg.”

The group cited a Wall Street Journal article that observed in November that Soros was the biggest donor in the 2022 midterms, dropping $128 million to fund Democratic committees.

“That was in addition to a cool $50 million contribution to his Democracy PAC in December 2022, which redirects funds to other Democratic super PACs,” the report noted.