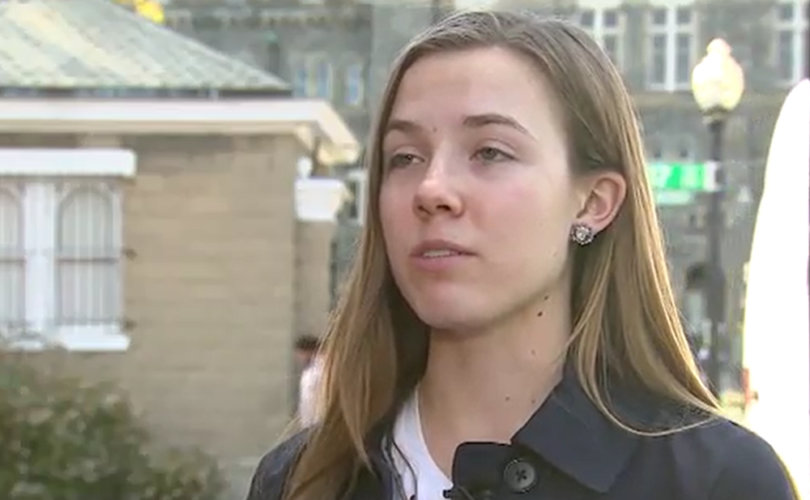 Amelia Irvine is the president of the pro-life, pro-family Love Saxa student group at Georgetown University.

Love Saxa, a campus organization that defends traditional marriage, retained the legal services of Alliance Defending Freedom after discovering that Georgetown had deposited checks from their donors into bank accounts for the  “LGBTQ Resource Center Reserve” and the “Saxatones,” a group with ties to the Sexual Minority Youth Assistance League.

The pro-life, pro-family Love Saxa student group is requesting its donors get in touch so that they can ensure Georgetown respects their intentions.

The Alliance Defending Freedom has written a letter to Georgetown University demanding that the institution investigate the matter, deliver the intended donations to Love Saxa and hold accountable those responsible for the misappropriation.

In its letter, the legal team detailed the appropriated gifts:

“On November 1, 2017, an individual sent Love Saxa a check for $50.00. Miss Irvine (Love Saxa president Amelia Irvine) promptly deposited that check with the Center for Student Engagement, but the funds were never placed in Love Saxa's account. Instead, on December 8, 2017, this donor received a receipt from Georgetown University, showing that his $50.00 donation was allocated to the “LGBTQ Resource Center Reserve.

“On December 11, 2017, another donor contributed $100.00 to Love Saxa through Georgetown' Phonathon. But his receipt from Georgetown showed that his donation had been allocated to the Saxatones. Curiously, this group has partnered with the Sexual Minority Youth Assistance League.

“In December 2017, Miss Irvine also deposited a $250 check from another donor with the Center for Student Engagement. Once again, those funds have not appeared in Love Saxa's account.

“During Georgetown's recent Phonathon, one student involved in that effort told Miss Irvine that Love Saxa was “making bank” through this university-wide fundraiser. Apparently, Love Saxa's bold defense of values consistent with the Catholic faith excited many donors. Yet to date, our client has not received any funds from that event whatsoever.”

Love Saxa was at the center of a campus controversy from September to November 2017. It began when Irvine wrote about her group in Georgetown’s The Hoya newspaper. Angered by Love Saxa’s support of Catholic teachings concerning human sexuality, sexual complementarity and marriage, several Georgetown students made a formal complaint to the Student Activities Commission. They accused the group of “fostering intolerance or hate of others because of their … sexual preference.” In response, Georgetown’s administration launched an investigation into the group.

After debating the matter, the Student Activities Commission decided not to impose sanctions on Love Saxa. They sent their recommendations to the university’s director of student engagement, saying that while it “acknowledges and respects the concerns put forth by the complainants, the commission did not find Love Saxa’s purpose or actions to be in violation of the Student Organization Standards.”

The student-run commission stated that it strove “to create an environment among student organizations where ideas can flow freely in a civil and respectful manner” and that it upheld the principle expressed in Georgetown’s “Student Organization Standards” that “in a university, it is particularly necessary that his respect encompass diversity and difference of opinion.”

At least two complainants were unhappy with the decision. Jasmin Ouseph, a junior from Fort Lauderdale, Florida, told The Washington Post that the process was “ridiculous.”

“ … At the end of the day, it was eight straight people deciding that being pro-heterosexual-marriage-only doesn’t also mean that you’re anti-same-sex marriage, which I find a little ridiculous,” Ouseph stated. “Saying that I’m pro-white-supremacy would also indicate that I’m against racial justice. It works literally the same way no matter how you spin it.”

She has determined to push for university recognition of a campus pro-abortion group.

Chad Gasman, a sophomore from Los Angeles who identifies as LGBTQ, told The Washington Post that the decision was a “big step backwards” and called into question “the university’s reputation and self-made claim of being the nation’s most queer-friendly Catholic campus.” Gasman resented that fact that tuition money will continue to support Love Saxa.

“Ultimately, we’re being forced to pay for people who hate us,” he said.

But Love Saxa denied hating anyone. Hunter Estes, president of the Georgetown Knights of Columbus, wrote an editorial in The Georgetown Review in support of the group, warning against the dangers of the “hate” tag.

“It is incredibly disappointing that accusations of hate are being lodged against those who hold a view that is in line with the beliefs of our Catholic university,” he told LifeSiteNews. “I fear that the willingness to suppress opinions contrary to one's own is on the rise on our campus.”

“Accusations of hate have become tools to silence any form of expression from those who disagree with the modern political orthodoxy,” he said.