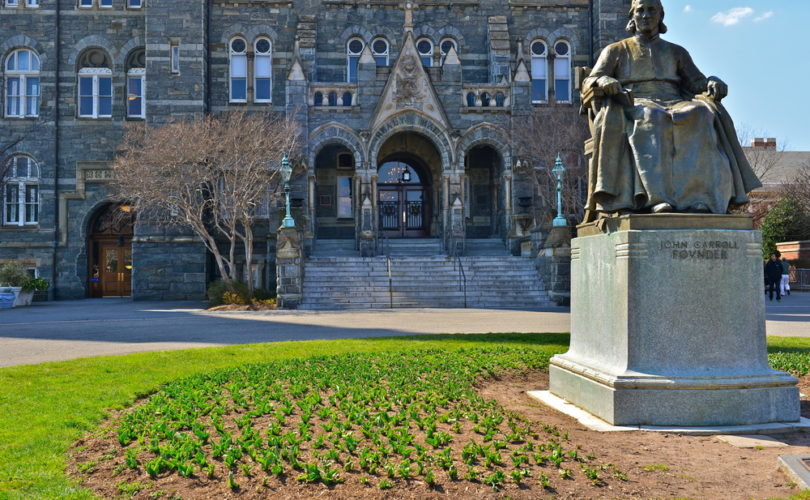 WASHINGTON D.C., January 12, 2018 (LifeSiteNews) – In a startling move for a university that claims to be Catholic, Jesuit-run Georgetown University announced this week that it will offer LGBT-only campus housing.

Perhaps more startling, the university claims the move is based on “Jesuit values.”

Located in the tony Georgetown neighborhood of Washington, GU is about as old as the nation itself. Founded in 1789, the institution boasts a long and illustrious history, which in recent decades has given way to controversy as it has become not only secularized but in some ways anti-Catholic.

The proposal for “‘The “Crossroads: Gender and Sexuality’ Living Learning Community (LLC) was initially rejected by the Office of Residential Life in April,” reports Campus Reform, which broke the story, “but was subsequently approved in December.”

According to the Campus Reform report, associate director of residential education Katie Heather “informed student Grace Smith, a leader of the LLC effort, that her proposal has ‘been approved and accepted for the 2018-2019 academic year.’”

Vice president of student affairs Todd Olson said the LGBT campus housing “will provide a community space for discussion on gender and inclusion while upholding the Jesuit values of community in diversity and educating the whole person.”

Grace Smith, head of the student government’s LGBTQ+ Inclusivity Policy Team, said in a Facebook posting that the move is “A REALLY BIG DEAL AT A JESUIT UNIVERSITY.”

“This means that students will now begin to have a unique residential space dedicated to exploring and understanding themselves and others in relation to gender and sexuality,” Smith continued. “Congratulations to everyone who made this dream a reality.”

Authentic Catholicism bullied and squelched at Georgetown U.

In 2014, Supreme Court Justice Antonin Scalia reportedly said of his alma mater, Georgetown University, that it is “not Catholic anymore.”

Recent history seems to bear that out.

In October, a student group at Georgetown University faced defunding and other possible sanctions for defending the Catholic Church’s teaching on marriage.

GU Pride and Georgetown University Queer People of Color complained claimed the Love Saxa group violates the Division of Student Affairs’ Student Organization Standards. The GU student newspaper, The Hoya, piled on with an editorial, asserting that Love Saxa, because of its stance on marriage, “fosters intolerance” and therefore “is antithetical to what a university club should be.” The group was also said to be “homophobic.”

The complaint was eventually dropped by the university.

In April 2016, Planned Parenthood CEO Cecile Richards received a standing ovation at GU when she delivered a lecture despite opposition from the archbishop of Washington and pro-life students.

During her speech, Richards commended pro-choice campus groups while also praising abortion activist Wendy Davis, birth control crusader Sandra Fluke, and the millennial generation for what she claimed was its belief in “LGBT rights” and “reproductive rights.”

In May 2012, Georgetown’s Public Policy Institute invited then Health and Human Services (HHS) Secretary Kathleen Sebelius to deliver a commencement speech, despite criticism from Catholics angry about the Obama administration’s healthcare policies.  Before and after the address, GU students hostile to Catholic protesters hurled angry insults at the group, standing just outside a campus entrance.

The Exorcist author and Academy Award winner William Peter Blatty said at the time that his alma mater had for the past two decades “invited speakers who support abortion rights and has refused to comply with orders by the late Pope John Paul II for church-affiliated colleges and universities,” according to a Fox News report.

“I owe much to the Jesuit fathers and to Georgetown University,” Blatty said on his The Father of King Society website, according to the Fox News report. “What I owe Georgetown, however, is nothing as compared to what Georgetown owes to its founders and the Christ of faith.”

A 119-page dossier compiled by the Cardinal Newman Society (CNS) at Blatty’s request in 2013 and updated in January 2017, “Catholic Identity Concerns at Georgetown University,” offers a litany of troubling, increasingly anti-Catholic actions and trends at GU.

“Several of the student organizations sponsored by Georgetown were found to be advocating for abortion, same-sex ‘marriage’ and contraception,” notes a summary report by Church Militant.

In particular, the dossier focuses on GU's hiring of anti-Catholic faculty and staff, including professors who worked for pro-abortion groups and who promote abortion; who advocated for physician-assisted suicide; and who advocated for gender ideology and same-sex marriage, according to a bullet list compiled by Church Militant based on the dossier.

The list also included a lesbian professor who advocates for “gay and bisexual activity;” a Catholic priest in a same-sex “marriage” and who officiated at “same-sex weddings;” and a priest who co-founded a group to oppose U.S. bishops on same-sex marriage.