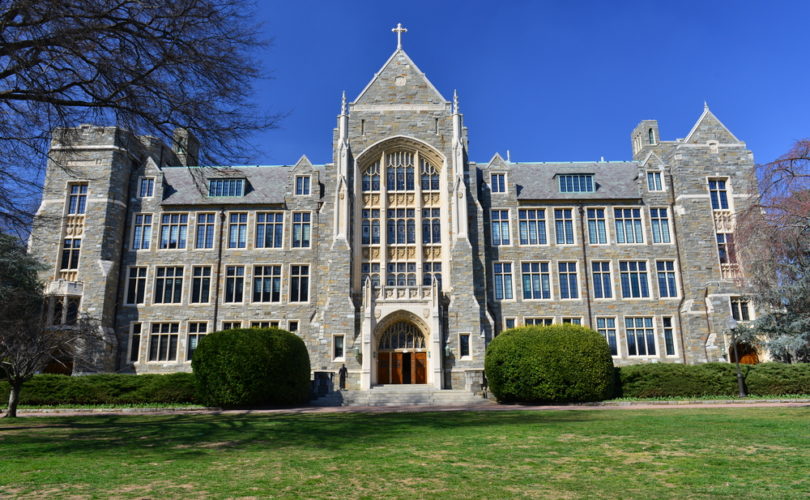 March 4, 2016 (CardinalNewmanSociety) — The Cardinal Newman Society broke the news on Wednesday that the Lecture Fund at Georgetown University invited Planned Parenthood Federation of America (PPFA) President Cecile Richards to campus this April. The University defended its decision to allow Richards to speak on campus in a statement released yesterday citing Georgetown’s commitment to “the free exchange of ideas.”

“As the nation’s oldest Catholic and Jesuit university, Georgetown University is proud to be a university that deeply values our faith tradition and that encourages the free exchange of ideas,” according to the statement. “We respect our students’ right to express their personal views and are committed to sustaining a forum for the free exchange of ideas, even when those ideas may be difficult, controversial or objectionable to some.”

“They said the same thing when Larry Flynt and Barack Obama spoke at Georgetown,” Cardinal Newman Society President Patrick Reilly told CNSNews.com in response to Georgetown’s statement. “Besides a clear bias in the choice of speakers, there’s no sense of moral truth, which is the central point of a Catholic university. Either you accept Catholic moral teaching as true or you do not. In the case of Georgetown, they simply do not.

“In bringing in someone with such a horrendous record of not only advocating ideas that would be contrary to Catholic teaching, but is herself responsible for the deaths of more than two million babies under her watch, Georgetown demonstrates that it does not understand the nature of a Catholic university,” Reilly added.

As the Newman Society reported yesterday, PPFA’s records of “abortion services” disclosed in annual reports show that Richards has overseen the deaths of over 2.8 million babies since taking charge of the organization in 2006. The number of reported abortions increased steadily from 2006-2011 before waning in recent years.

“Ms. Richards is not being paid to speak,” Georgetown’s statement continued. “Student groups may invite any outside speakers and guests to campus. An appearance of any speaker or guest on campus is not an endorsement by the university.”

The University added: “We work very hard to ensure that [Catholic and Jesuit] values maintain a privileged place in our community while at the same time providing a forum that does not limit speech either in the content of the view being expressed or the speaker expressing the view.”

And despite a long history of Catholic identity abuses, including many documented by the Newman Society in the current academic year, Georgetown’s statement asserted, “Our Catholic and Jesuit identity on campus has never been stronger.”

According to the University’s Speech and Expression Policy, there are some limits the administration is willing to impose on free speech.

“The right of free speech and expression does not include unlawful activity or activity that endangers or imminently threatens to endanger the safety of any member of the community or any the community’s physical facilities, or any activity that disrupts or obstructs the functions of the University or imminently threatens such disruption or obstruction,” the policy states. “Moreover, expression that is indecent or is grossly obscene or grossly offensive on matters such as race, ethnicity, religion, gender, or sexual orientation is inappropriate in a university community and the University will act as it deems appropriate to educate students violating this principle.”

But the policy goes on to stipulate that “these qualifications are naturally subject to interpretation,” and students can file an appeal to the vice president for student affairs through a “Speech and Expression Committee” if they believe the policy has been misapplied.

Many would argue that Richards, as the head of an organization that kills human beings on a daily basis, is a far more controversial speaker than pornography tycoon Flynt, whom the Georgetown Lecture Fund hosted in 1999.

During that controversy, Archbishop William Lori of Baltimore, who at the time was Auxiliary Bishop of the Archdiocese of Washington, criticized Georgetown and then-President Father Leo J. O’Donovan, S.J., for allowing Flynt to speak on campus.

Speaking on behalf of Cardinal James Hickey, who was out of the country at the time, Bishop Lori said Flynt speaking at Georgetown is “utterly contrary to the Catholic identity of Georgetown University. The university’s actions are indefensible.”