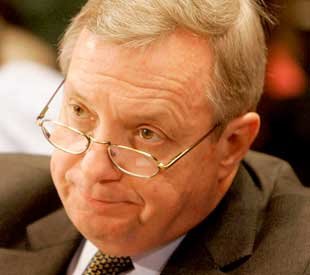 WASHINGTON, D.C., February 28, 2018 (LifeSiteNews) – Tonight, Georgetown University will present pro-abortion Senator Dick Durbin, D-IL, whose bishop recently barred him from Holy Communion, with an award for devoting “his life to the core Jesuit value of service to others.”

This award is “conferred upon Georgetown alumni who have rendered outstanding and exemplary service to his/her profession or community in support of humanitarian causes,” according to the University.

Durbin received his bachelor’s and law degrees from Georgetown.

“I am humbled to be in the company of so many who have spent their lives in the service of others,” Durbin said in a press release. “Father Pedro Arrupe challenged all alumni of Jesuit schools to engage in the struggle for justice on behalf of the most vulnerable in our society. I have tried to meet that challenge during my time in office and am honored to be recognized by my fellow Georgetown alumni.”

“This is a smack in the face of our Catholic identity and values,” Michael Khan, a senior at Georgetown and the former President of Georgetown Right to Life, told LifeSiteNews.

Khan, the co-director of the Cardinal O’Connor Conference on Life at Georgetown University, said, “Calling Senator Durbin, one of the most pro-abortion members of the United States Senate, a ‘humanitarian’ is an absolute disgrace.”

“This only widens the gulf between Georgetown’s leaders and faithful Catholic families,” Patrick Reilly, President of the Cardinal Newman Society, told LifeSiteNews. “How can America’s oldest Catholic university publicly honor a champion of abortion who has just been denied the Eucharist by his own bishop? This honor directly opposes the pro-life work of the Church and Georgetown’s own Catholic mission.”

Reilly said honoring Durbin “reinforces the precedent that has been established over 50 years of dissent and secularization across much of Catholic higher education.”

During his time in office, Durbin has repeatedly voted in favor of abortion on demand. He, along with 14 other Catholic senators, recently voted in favor of late-term abortion. It was this that led his ordinary, Bishop Thomas Paprocki, to tell him in accordance with canon law that he may not receive Holy Communion unless he repents.

Hunter Estes, a junior at Georgetown, told LifeSiteNews his school bestowing such a high honor on Durbin is “ironic and disappointing.”

“While the Senator may state that he fights for the most vulnerable in society, I think this is truly called into question by his actions,” said Estes.

Durbin votes for and publicly advocates against more Catholic moral teachings than just abortion. He is a strong supporter of same-sex “marriage”; the pro-gay Human Rights Campaign gives him 100% on their scorecard. He also earned a 100% from abortion lobby group NARAL.

“Georgetown has never missed an opportunity to tout the Dream Act, but has neglected to comment at all about the Pain-Capable Unborn Child Protection Act, which Mr. Durbin helped to defeat in the Senate,” said Khan. “As a member of leadership in the Senate Democratic caucus, Senate Durbin could have stood up for unborn children, but he chose not to. This is a man who was barred from taking Communion by his home bishop, for his explicitly anti-Catholic stances.”

“Georgetown once again is blinded by their extreme progressive ideology – and there's absolutely no excuse,” concluded Khan.

The Archdiocese of Washington did not respond to a request for comment.