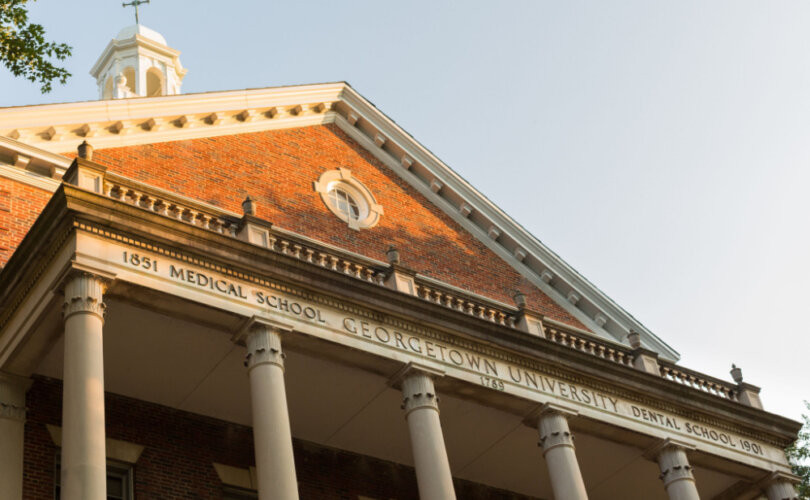 In a stunning investigative report, The Spectator World’s Amber Athey described how in 2021, Georgetown’s School of Medicine required first-year medical students to take a class in which they were told that these drastic, as-yet not fully tested measures are the “only way to help” trans-identifying people “fix’ their bodies.”

Guest lecturer Dr. David S. Reitman, an associate professor in the Department of Pediatrics who practices pediatric medicine at Georgetown University Hospital, warned medical students in his slide presentation titled “Transgender Health Care” that “patients suffering from gender dysphoria will likely attempt suicide if they do not treat them with puberty blockers, ‘gender-affirming hormone therapy’ and surgical sex changes.”

According to Athey, the course falsely claimed that puberty blockers are “fully reversible.”

In a subsequent interview with Fox News’ Tucker Carlson, Athey said, “The fact that this is happening at a Catholic school I think really speaks to just how deep demonic influences have embedded themselves in our culture.”

I spoke to multiple Catholic ethicists for this story who made quite clear that this is inappropriate and a huge violation of Catholic medical standards.  The Catholic Church, especially in its education arms, is supposed to be teaching objective truth and biological reality.

God creates all of his children with love.  He doesn’t create children in the supposed wrong body.

Child mutilation is being encouraged at @GUMedicine, the oldest Catholic medical school in the country. This demonic infiltration must be stopped.

Check out my interview with @TuckerCarlson and read my full article here: https://t.co/i1kTZlTN6A pic.twitter.com/dxvz76m2l3

A ‘horrific violation of medical ethics’

The Catholic ethicists consulted during the course of Athey’s investigation expressed grave concern that the prominent Catholic medical school was promoting treatments that violate Catholic teaching.

“The very reason Catholics sponsor medical schools is to bring the light of our Catholic faith to the work of health and healing, not to destroy what is beautiful and perfectly healthy,” Patrick J. Reilly, president of the Cardinal Newman Society, told Athey. “But teaching students to mutilate the body of a child or an adult is a horrific violation of medical ethics and the mission of Catholic education.”

“In many ways and for several decades, Georgetown University has repeatedly violated the mission of Catholic education, which forms students in both faith and reason. It flouts Catholic teaching without any consequence, and it causes enormous damage by its blatant hypocrisy,” Reilly said. “Catholic families should reject Georgetown out of principle and for the sake of those who might be harmed by studying there.”

“To teach future doctors how to help people engage in gender transitioning, I would say, is not ethical and not something that a Catholic medical school should be doing,” said John F. Brehany, executive vice president and director of institutional relations at the National Catholic Bioethics Center.

He added, “While you can’t point to one specific Catholic teaching that condemns the practice, if you apply traditional moral principles about respect for the human body, both of protecting and taking good care of the body and of not destroying, damaging or sacrificing a part of one’s body except for a very good, well-founded reason, then it would certainly be the position of the National Catholic Bioethics Center that this is unethical.”

Bishop Michael Burbidge of the Diocese of Arlington, Virginia, which lies directly across the Potomac River from the Georgetown Medical School, noted in his “Catechesis on the Human Person and Gender Ideology” published last year that “the claim to ‘be transgender’ or the desire to seek ‘transition’ rests on a mistaken view of the human person, rejects the body as a gift from God, and leads to grave harm.”

His catechesis serves as a direct indictment against the practices being promoted at Georgetown’s medical school.

“To affirm someone in an identity at odds with biological sex or to affirm a person’s desired ‘transition’ is to mislead that person,” Burbidge said. “It involves speaking and interacting with that person in an untruthful manner.”

“In no circumstances can we confirm a person in error,” he explained. “Indeed, there is ample evidence that ‘gender affirmation’ not only does not resolve a person’s struggles but also can in fact exacerbate them.”

Burbidge sees the misinformation being promoted in the secular world of public schools and social media, and by pro-LGBT activists within the Church as especially harmful for children.

A child needs to know the truth: He or she has been created male or female, forever.  Affirming a child’s distorted self-perception or supporting a child’s desire to ‘be’ someone other than the person (male or female) God created, gravely misleads and confuses the child about ‘who’ he or she is.

‘Gender-affirming’ medical or surgical interventions cause significant, even irreparable, bodily harm to children and adolescents.”