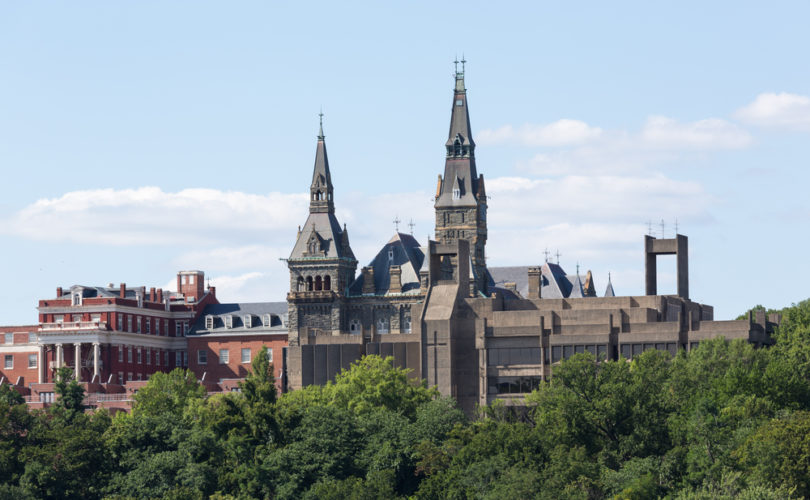 February 8, 2016 (CardinalNewmanSociety) — Two Georgetown University law professors posted an article on a University website this week calling on the World Health Organization (WHO) to recommend birth control and abortion as means of responding to the Zika virus outbreak in South America in order to “truly respect the dignity and health of women of childbearing age.”

On Georgetown University’s O’Neill Institute for National and Global Health Law blog website, Lawrence O. Gostin, faculty director of the O’Neill Institute and university professor at Georgetown, and Alexandra Phelan, an adjunct professor in global health law and doctoral researcher with the O’Neill Institute, published an article Monday titled “The WHO Must Include Access to Birth Control and Abortion in its Temporary Recommendations for Zika-Associated Public Health Emergency of International Concern.”

The Georgetown professors advocated for abortion and contraception several times in the article.

“Georgetown University frequently turns a blind eye to dissent and immorality, but this is altogether a new degree of scandal,” said Cardinal Newman Society President Patrick Reilly, who pointed out Gostin’s public support for physician assisted suicide in Crisis Magazine several years ago. “These professors are lobbying for a death sentence against babies whose misfortune is to be borne by mothers infected by mosquito bites. Such cruelty has no place in a Catholic institution.”

The authors called on WHO Director-General Margaret Chan to release Temporary Recommendations under the 2005 International Health Regulations to combat the Zika virus that “require countries to respect, protect, and fulfil women’s health-related human rights, including reproductive rights. This includes access to contraception (including the birth control pill and condoms) but also to accessible, affordable, acceptable, and quality abortions.”

In the latest statement the WHO released on the virus on February 1, the organization did not specifically mention birth control or abortion in its Temporary Recommendations. The virus is transmitted by mosquitos, and it’s possible that the unborn babies of pregnant women who contract the virus could develop microcephaly, a condition that results in unusually small heads and brains.

“The Director-General’s Temporary Recommendations should include a directive to countries to ensure that women at risk of Zika virus infection have access to birth control and safe abortion,” the Georgetown professors reiterated later in their article.

The authors expressed concern that “nearly all countries in the Americas currently experiencing or likely to experience Zika virus cases have laws that may prevent women accessing reproductive services,” and stated, “It is unfair, and ineffective, to place the burden of responsibility for preventing foetal malformations solely on the women. Governments cannot ask women to postpone having a family indefinitely, especially if they do not have access to safe reproductive services.”

Gostin and Phelan added that the WHO director-general should “formally recommend that States Parties ensure access to contraception and safe abortions” in order to “truly respect the dignity and health of women of childbearing age.”

Phelan is listed on the Georgetown Law website as teaching courses in “Public Health Law and Ethics,” “Global Health Law” and “Epidemiology for Lawyers”

The O’Neill Institute at Georgetown “was established in 2007 through the generous philanthropy of Linda and Timothy O’Neill to respond to the need for innovative solutions to the most pressing national and international health concerns.

“Housed at Georgetown University Law Center in Washington D.C., the O’Neill Institute reflects the importance of public and private law in health policy analysis,” according to the description of the Institute. “The O’Neill Institute draws upon the University's considerable intellectual resources, including the School of Nursing & Health Studies, School of Medicine, the Public Policy Institute, and the Kennedy Institute of Ethics.”

The article quoted Gostin saying: “If the association between microcephaly and Zika virus is confirmed there will be an ethical imperative to protect women of childbearing age from contracting the infection. The public will demand well-funded, proactive leadership from the World Health Organization.”

The Cardinal Newman Society reached out to Georgetown President John DeGioia and University officials to see if the University agreed with the positions of Gostin and Phelan that birth control and abortion should be recommended in dealing with the Zika virus outbreak. The Newman Society further asked about having University professors publicly advocate for abortion and contraception on a University-owned website conflicting with the University’s Catholic mission, as both abortion and contraception are considered mortal sins and “grave evils” by the Church.

The Newman Society also asked if any assurances could be offered by the University to parents and families that Gostin and Phelan are not advocating for abortion and contraception in the classroom. No responses were received by the time of publication.

As the article stated that questions about the post should be directed to Phelan, the Newman Society contacted her to ask if she or Gostin think that publicly advocating for abortion and contraception on a Georgetown University-owned website conflicts with the University’s Catholic mission. And Phelan was specifically asked if she or Gostin advocate for abortion and contraception in the classroom at Georgetown, but no responses were received.

Many in the media have pointed to the Zika outbreak as a reason to expand legalized abortion in South America, and on Friday the United Nations High Commissioner for Human Rights Zeid Ra’ad Al Hussein called for the repeal of laws and policies in South America that restrict access to contraception and abortion.

“Laws and policies that restrict (women’s) access to these services must be urgently reviewed in line with human rights obligations in order to ensure the right to health for all in practice,” he said.

But the Brazilian Conference of Catholic Bishops said this week that there is “no justification whatsoever to promote abortion” as part of the response to the Zika virus, and made clear that the promotion of abortion “in the cases of microcephaly, as, unfortunately, some groups are proposing to the Supreme Federal Court” shows a “total lack of respect for the gift of life.”