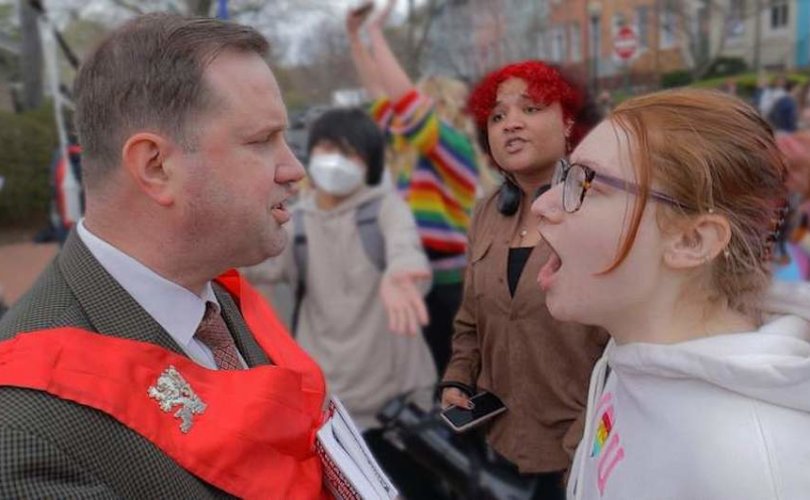 WASHINGTON, D.C. (LifeSiteNews) – Students at Georgetown University cursed at and spat on volunteers with the American Society for the Defense of Tradition, Family, and Property (TFP Action) and claimed that transgender ideology is compatible with Catholic teaching.

“I’m a devout Catholic for many years and I support none of this [expletive],” one young woman told the TFP volunteers on April 4. The volunteers were handing out information on how “transgenderism is the family’s worst enemy.”

“Why are you so surprised we’re supporting Catholic teaching?” one member of TFP Action asked another student who appeared incredulous at a sign that said “purity is for everybody.”

“You know, the current pope, actually, being more progressive so as not to lose following, you have to like modify with the times,” the student said. However, Pope Francis has called “gender theory” a form of “ideological colonization.”

The Catholic Church upholds the biological reality that there are only two genders and that God creates every human being either male or female. “By creating the human being man and woman, God gives personal dignity equally to the one and the other. Each of them, man and woman, should acknowledge and accept his sexual identity,” states the authoritative Catechism of the Catholic Church.

Another young woman swore at TFP Action and claimed their activism against transgenderism is why gender dysphoric individuals kill themselves. Researchers have warned that so-called “gender-affirming care” does not prevent suicide, though.

Another TFP volunteer said someone spat on him.

“You are not spreading the truth, you are spreading hate,” one person yelled.

“Get off our campus, because no one [expletive] wants you here,” an LGBT activist yelled at TFP Action. “Gender is a spectrum, unlike sex,” another student told TFP Action members, after swearing in their faces.

“Hey ho, these transphobes have got to go,” another activist began yelling into a megaphone, surrounding the praying Catholic volunteers.

The day continued with expletive-filled screaming at TFP Action, with “[expletive] these transphobes,” being picked as the default chant.

“God created us male and female,” TFP Student Action director John Ritchie said in a news release about the day. “Every cell of the human body – about 30 trillion cells – is stamped with a fixed genetic marker, XY for men and XX for women.”

He said, “no amount of surgical procedures can change God’s original design. But the transgender movement would like to fool us into believing that men can become woman, and that women can become men.”

“Not only did pro-LGBT activists attack God and the basic human biology, but they also disrupted the recitation of the Rosary with yelling, twerking, and cursing,” Ritchie said. “They preach tolerance for sin but attack those who love virtue.”

“We can’t give up,” the TFP director said. “More than ever, we must continue to serve God, promote the truth on college campuses, and encourage more souls to follow the heroic path of virtue, purity, and sanctity.”