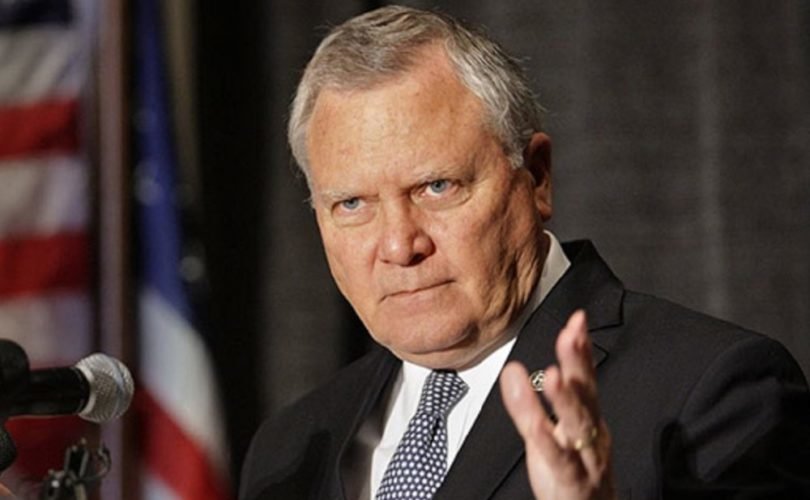 ATLANTA, Georgia, March 9, 2016 (LifeSiteNews) – Georgia's Republican governor has come out strongly against proposed legislation protecting clergy and others from being forced to participate in or condone so-called homosexual “marriages.”

Citing the Bible and the fact he was a Southern Baptist who's taken religion courses, Nathan Deal said opposition to homosexual “marriage” doesn't square with Christ's teaching and that Republicans advocating for the Georgia religious liberty bill should step back and “recognize that the world is changing around us.”

“What the New Testament teaches us is that Jesus reached out to those who were considered the outcasts, the ones that did not conform to the religious societies' view of the world,” Deal said. “We do not have a belief in my way of looking at religion that says we have to discriminate against anybody. If you were to apply those standards to the teaching of Jesus, I don't think they fit.”

Deal also stated he would reject any measure that “allows discrimination in our state in order to protect people of faith,” according to AJC.com.

He went on to cite the Bible passage where Jesus reaches out to the woman at the well and then declared there is no threat posed by governments treating same-sex couples as though they were married.

“What that says is, we have a belief in forgiveness and that we do not have to discriminate unduly against anyone on the basis of our own religious beliefs,” stated Deal. “We are not jeopardized, in my opinion, by those who believe differently from us.”

“We are not, in my opinion, put in jeopardy by virtue of those who might hold different beliefs or who may not even agree with what our Supreme Court said the law of the land is on the issue of same-sex marriage,” he went on. “I do not feel threatened by the fact that people who might choose same-sex marriages pursue that route.”

The Georgia Senate approved the bill February 19, after the Senate Rules Committee combined it with S.B. 284, the First Amendment Defense Act of Georgia, which broadened the legislation to “prohibit discriminatory action against a person who believes, speaks, or acts in accordance with a sincerely held religious belief or moral conviction that marriage is or should be recognized as the union of one man and one woman or that sexual relations are properly reserved to such marriage.”

Some 400 corporations have joined forces to oppose H.B. 757, a report from On Top Magazine said. Gathering under the “Georgia Prospers” moniker, companies include Home Depot, Coca-Cola, Delta Air Lines, and UPS, with some threatening to take their business elsewhere.

Immediately after its passage in the Senate, Deal urged lawmakers to amend the proposed law, saying he and his top aides are working with House Speaker David Ralston, who had criticized the bill, and other legislative leaders to do so.

“We're working with the leadership of the General Assembly now as that bill is continuing to move through the process,” Deal said. “So we'll see.”

Deal's lieutenant governor views the religious freedom legislation differently from how the governor does.

“It in no way interferes with our world-class tourism or business communities whatsoever,” Casey Cagle told the Atlanta Journal-Constitution. “We are simply ensuring that no Georgian suffers at the hand of our government for their view on marriage.”

Deal insisted he is still a supporter of “traditional marriage,” but he said, “That does not mean that those who hold to that view should feel like they are threatened by those who have a different point of view.”

He continued by calling on Republicans supporting the religious liberty legislation to accept that times are changing in terms of acceptance of homosexual attempts at marriage.

“I hope that we can all just take a deep breath, recognize that the world is changing around us, and recognize that it is important that we protect fundamental religious beliefs,” Deal stated. “But we don't have to discriminate against other people in order to do that. And that's the compromise that I'm looking for.”

The Georgia Republican is not the first GOP governor to step out of the way for denial of conscience protection by pro-homosexual groups and activists.

After signing the Indiana Religious Freedom Act into law last March, Governor Mike Pence bowed to pressure from pro-homosexual corporations, lawmakers, celebrities, and media and withdrew his support for the law.

Florida Governor Rick Scott signed a bill last June removing the state's decades-old ban on adoption placement of children in homosexual homes, citing religious freedom in stating that religious liberty was not mutually exclusive from discrimination. The removal of the ban left Christian adoption agencies without protection should they uphold their sincerely held moral belief that placing a child into a same-sex couple's custody is not in the best interest of the child.