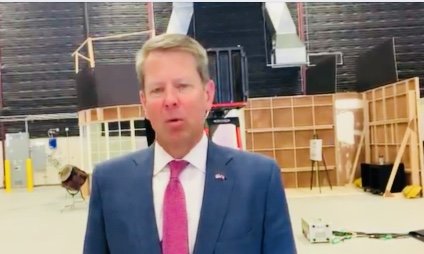 ATLANTA, Georgia, May 23, 2019 (LifeSiteNews) – Republican Gov. Brian Kemp of Georgia dismissed pro-abortion “C-list celebrities” who have slammed his state and threatened boycotts over its recently passed law banning abortions on most babies with beating hearts.

On May 7, Gov. Kemp signed the heartbeat bill, which has an exception allowing babies conceived in rape or incest to be aborted. There are also exceptions for physical medical emergencies and pregnancies deemed “medically futile.”

Speaking Saturday at the state Republican convention, Kemp said, “I understand that some folks don’t like this new law. I’m fine with that.”

Kemp continued, “We’re elected to do what’s right – and standing up for precious life is always the right thing to do.”

Taking a swipe at outspoken pro-abortion celebrities, such as Alyssa Milano, he said, “We are the party of freedom and opportunity. We value and protect innocent life — even though that makes C-list celebrities squawk.”

Missouri and Ohio have passed similar laws, and Louisiana is expected to follow suit. Alabama passed a law banning nearly all abortions under which doctors could go to prison for up to 99 years if they commit illegal abortions.

As the second largest film production facility in North America, it was great to see the positive impact @PinewoodStudios has on Fayette County and our state. #gapol pic.twitter.com/NWcCGI7eWR

Milano, who is filming a series in Georgia, called on women to participate in a “sex strike” in protest against the pro-life legislation. She previously gained notoriety when she showed up at Senate hearings of U.S. Supreme Court nominee Brett Kavanaugh in 2018, where she spoke out about his presumed views about abortion.

Other Hollywood types — including Alec Baldwin, Don Cheadle, Mia Farrow, Christina Applegate, and Minnie Driver — joined Milano in co-signing a letter to Gov. Kemp and Speaker David Ralston threatening to boycott Georgia, which has become one of the three top states for movie and television production. Director Ron Howard, who played the role of Opie on The Andy Griffith Show in the 1960s, has also threatened to boycott the state.

Kemp has been visiting movie and television production facilities in the state after cancelling a scheduled trip to Hollywood. On Wednesday, he was the Georgia Film Academy and Pinewood Studios, noting that the latter is the second largest film production facility in the country.