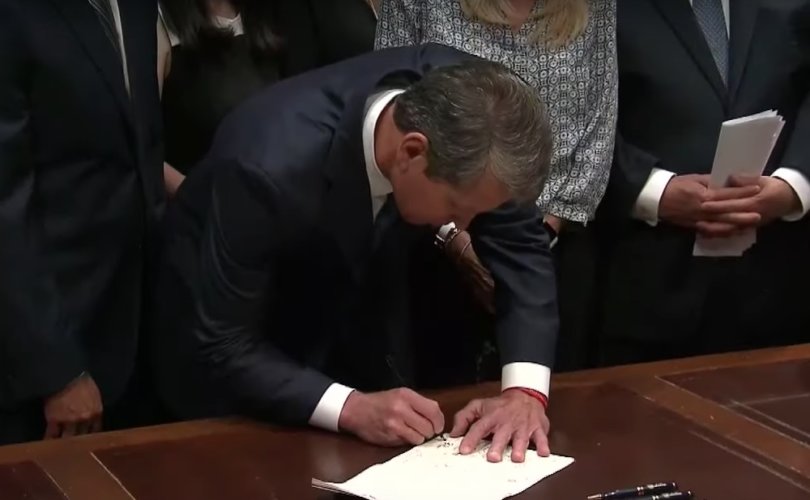 House Bill 481 forbids abortions once a fetal heartbeat can be detected except in cases of rape, incest, physical medical emergencies, and pregnancies deemed “medically futile.” If allowed to take effect, it will ban abortions in all other cases as early as six weeks into a pregnancy starting in January 2020.

Kemp signed the bill Tuesday morning, Fox News reports, declaring Georgia a “state that values life” and “stand[s] up for those who are unable to speak for themselves.” While pro-abortion activists are expected to sue to block the law from taking effect, Kemp declared it the state’s job to “do what is right, not what is easy…we will not back down. We will always continue to fight for life.”

“It's a historic day for Georgia, for Georgia families, and for those precious unborn babies,” state Rep. Ginny Ehrhart, one of HB 481’s cosponsors, added on Fox & Friends Tuesday morning.

With its exceptions for rape, incest, and “medical futility,” the Georgia law is not as strong as heartbeat measures introduced in other states. Even so, it provoked intense reactions among left-wing activists, particularly in the entertainment world.

Dozens of celebrities such as far-left actress Alyssa Milano and Hollywood institutions such as the Writers Guild of America have threatened to boycott Georgia if the ban was signed. The film industry has generated considerable jobs and revenue for the state’s economy.

“When you ban abortion, women die,” Milano claimed during a protest at the state capital last month, invoking a popular yet long-discredited myth about “back-alley” abortions before Roe v. Wade. “We cannot continue to allow these white men, middle-aged men, to dictate what we’re able to do with our bodies.”

“I can't govern because I'm worried about what someone in Hollywood thinks about me,” Kemp responded, CBN News reports. “I ran the last two years on these issues, and I got elected with the largest number of votes in the history of the state of Georgia, and I'm doing what I told people I would do.”

“Our business environment's good,” he added. “We cannot change our values of who we are for money. And we're not going to do that. That's what makes our state great.”

Planned Parenthood responded to the signing by declaring, “We warned them – we will see you in court, Governor Kemp. And we are coming for their seats.” But supporters of heartbeat bills say the legal fight is a feature rather than a bug, because they hope it will lead to the U.S. Supreme Court reconsidering and overturning Roe, thereby restoring Americans’ freedom to fully decide their own abortion laws.

“I hear it has a good chance” of reaching the nation’s highest court, Republican state Rep. Terri Collins said. “We've had a lot of the pro-life lobbyists working on it. We have a lot of national groups working on it.”