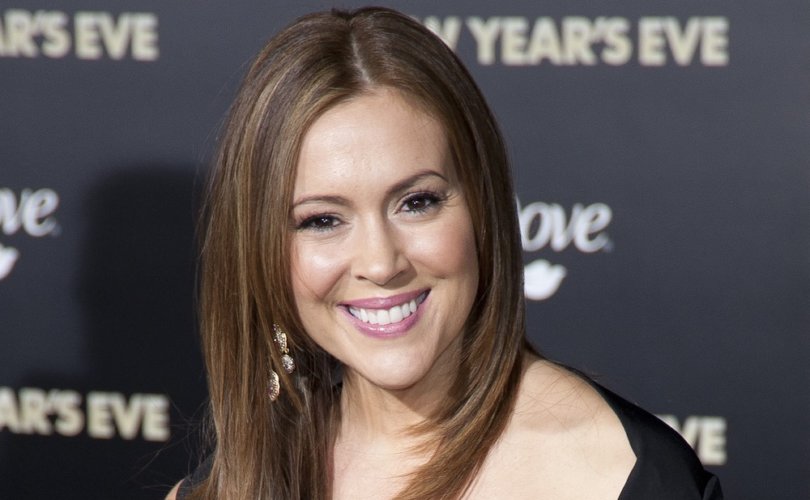 ATLANTA, April 4, 2019 (LifeSiteNews) — Far-left actress Alyssa Milano led a group of pro-abortion activists at Georgia’s capitol Tuesday in hopes of pressuring Republican Gov. Brian Kemp not to sign a law that would ban most abortions once a fetal heartbeat can be detected. She found herself face-to-face with a lawmaker who challenged her standing to dictate the state’s policy decisions.

Milano is leading dozens of celebrities as well as the Writers Guild of America, who are threatening to boycott Georgia if the ban is signed into law. The film industry has generated considerable jobs and revenue for the state’s economy.

On Tuesday, Milano and a crowd of about 30 supporters including Georgians who rely on the film industry gathered outside Kemp’s office at the State Capitol in hopes of pressuring him to veto H.B. 481, 11Alive reports.

“The entertainment industry is all-inclusive. What does it say if we don’t stand up here and say, ‘this is not okay?’” asked the actress, whose Netflix show currently films in Georgia and can’t be pulled out due to contractual obligations. “When you ban abortion, women die … we cannot continue to allow these white men, middle-aged men, to dictate what we’re able to do with our bodies.”

“The ramifications of losing Hollywood is not just about celebrity; it’s about very real lives and taxpayers who have lived here, some of them their whole lives,” implored prop business–owner Phoebe Brown, blaming the potential loss of her business on pro-life lawmakers rather than the liberal entertainers threatening to leave the state.

Milano was admitted to Kemp’s reception office in hopes of giving him a letter signed by more than 40 pro-abortion actors but was denied entry to see Kemp himself. In the office, Republican state Rep. Dominic LaRiccia confronted Milano about her activism.

Full video of the interaction between @Alyssa_Milano and @DominicLariccia #gapol #HB481 pic.twitter.com/Zlyvl9noNV

“What district of Georgia do you vote in?” LaRiccia asked. Milano answered that she works in Georgia, to which LaRiccia followed up, “Do you vote in Georgia?”

“But you don’t vote in Georgia?” LaRiccia repeated.

“Excuse me, don’t interrupt me,” Milano shot back. “That I was going to escort in, that they wouldn’t let me escort in…”

“So that’s a ‘no,’ you don’t vote in Georgia?” LaRiccia asked again. Milano again admitted that she didn’t but stressed that “the people that work on my crews, the 90,000 people that the entertainment industry actually employs do.”

A Kemp staffer offered to deliver the letter to the governor, which Milano took as an opportunity to play to the crowd. “These are the men that are voting on what is going on inside my uterus,” she declared. “This guy right here. This guy.”

The pro-abortion delegation’s efforts to sway Kemp were ultimately unsuccessful. The governor told the Atlanta Journal-Constitution, “I can’t govern because I’m worried about what someone in Hollywood thinks about me. I ran the last two years on these issues, and I got elected with the largest number of votes in the history of the state of Georgia, and I’m doing what I told people I would do.”

At the end of the video, a videographer can be heard quipping to LaRiccia, “You know the Koch brothers don’t live here either,” a reference to the wealthy libertarians known for donating to a range of Republican candidates and conservative causes. (David Koch supports legal abortion and same-sex “marriage,” though the brothers have supported various socially conservative candidates and organizations.)

“I guess that’s her idea of a sick burn or just a clever clap back,” Hot Air’s Karen Townsed said of the Koch reference. “People in liberal bubbles honestly don’t stop to think regular Americans disagree with them. Ever. The party of infanticide must be obeyed.” A recent ScottRasmussen.com-HarrisX poll found that 56% of voters who are told a fetal heartbeat can be detected as early as six weeks support heartbeat abortion bans.

While liberals assail the heartbeat bill as too extreme, many pro-lifers remain worried that its exceptions, particularly those for rape, incest, and “medically futile” pregnancies, are too lax. Georgia Right to Life called on House lawmakers to remove the exceptions, but the House ultimately left them in.