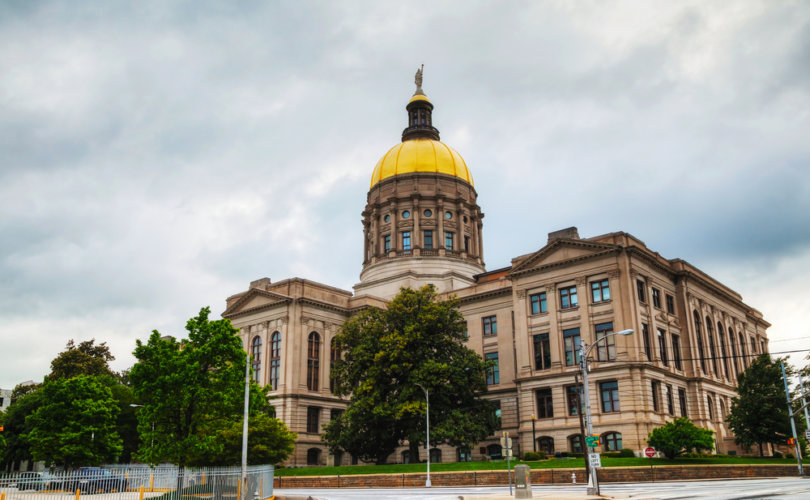 ATLANTA, Georgia, March 1, 2019 (LifeSiteNews) – Georgia is joining the growing list of states pursuing two relatively recent trends in pro-life legislation: one bill that would ban most abortions for babies with detectable heartbeats, the other a “trigger” law that would automatically ban most abortions once Roe v. Wade falls.

Introduced Monday, House Bill 481 states that “no abortion is authorized or shall be performed if the unborn child has been determined to have a human heartbeat,” except to save a mother from death or “serious risk of substantial and irreversible physical impairment of a major bodily function.” The bill specifies that mental or emotional conditions do not qualify.

The proposal is a “hopeful step toward the ultimate goal of adopting a ‘personhood’ amendment to the state constitution that will protect all innocent human life from fertilization through natural death,” Georgia Right to Life President Ricardo Davis commented, the Atlanta Journal Constitution reports.

On Thursday, pro-life lawmakers also introduced HB 546, which forbids abortion if Roe v. Wade is overturned except in cases of rape, incest, physical medical emergency, or when a preborn child has been determined to have a “profound and irredeemable” condition that is supposedly “incompatible” with sustained life after birth. The bill also specifies that it does not prohibit contraceptives administered “before the time when a pregnancy could be detected or determined through conventional medical testing.”

Abortionists would be punishable by up to ten years in prison and/or up to a $100,000 fine. HB 546 wouldn’t take effect until a joint resolution of the legislature is signed, after either the U.S. Supreme Court overturns Roe’s central holding or a national Constitutional amendment invalidates the 1973 ruling.

The heartbeat bill does not contain the trigger bill’s rape or incest exceptions, presumably meaning there would be an extremely narrow window in which abortion would still be legal. It remains to be seen whether the legislature will add exceptions to one or remove them from the other.

The two bills represent strategies to contend with Roe from opposite ends. Heartbeat bills, which have been introduced or passed in Florida, Iowa, Kentucky, Mississippi, Missouri, Ohio, South Carolina, Tennessee, and Texas in recent months, ban abortion far earlier than Roe allows, provoking a legal review pro-lifers hope will finally lead to its overturn.

“Trigger laws,” by contrast, won’t instigate legal battles because they won’t take effect until the controlling precedent changes, but are meant to prepare for the day such a change finally happens. Nine states currently have their unenforced, pre-Roe abortion bans still on the books, with another five states having enacted trigger laws. Arkansas signed one into law earlier this month, and trigger laws are currently progressing through the Kentucky and Missouri legislatures.

“Our state values life – from conception to natural death,” declared Gov. Brian Kemp, who supports both bills. “This legislation reflects our calling to protect the unborn and our desire to ensure opportunity for all. In a time where lawmakers across the country justify late-term abortions and infanticide, we will champion life.”

As a Republican gubernatorial candidate, Kemp declared that he wanted to enact the “toughest abortion laws in the country.”