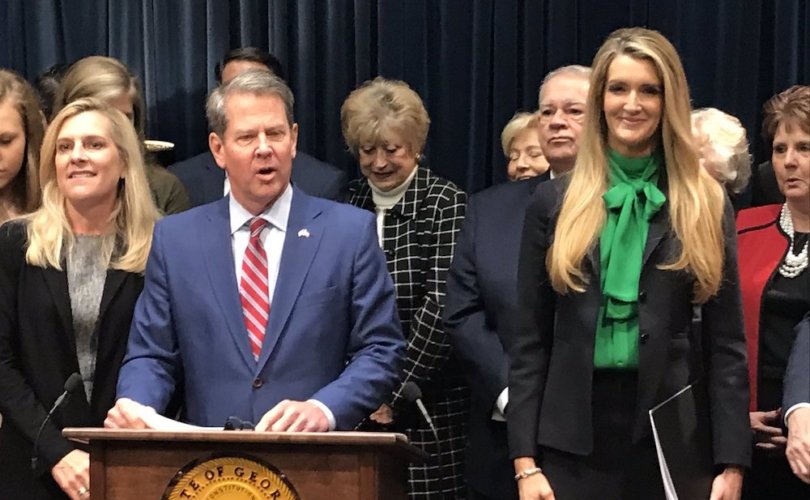 The “abortion-on-demand agenda is immoral,” Loeffler said today. She pledged to vote for legislation banning abortion at 20 weeks, perhaps to assuage pro-life fears over her association with the WNBA, which has donated to Planned Parenthood, and her sitting on the board of the Grady Health hospital system, which is associated with the state’s largest abortionist training program. Her new website also says she supports the bill banning most abortions on babies with detectable heartbeats that Gov. Kemp signed earlier this year.

“When it comes to protecting innocent life, I look to God because every life is a blessing,” Loeffler said Wednesday.

Her just-launched website declares: “A devout Christian, Loeffler is unapologetically pro-life and backs Governor Kemp’s ‘heartbeat bill’, which was signed earlier this year. She will champion life – from conception to natural death – and stand firm against the left’s abortion on-demand agenda. In the Senate, Kelly will strongly support S. 160, Senator Lindsey Graham's 20 week abortion ban and proudly back President Trump's conservative judges.”

Isakson announced in August he would be retiring at the end of the year due to “mounting health challenges” stemming from Parkinson’s disease and surgery to remove a growth on his kidney. Many, including the Trump administration, requested that Kemp appoint four-term Republican Rep. Doug Collins to replace him. Collins’ voting record is far from conservative, but he has been a staunch supporter of the president.

But word soon spread that Kemp instead planned to pick Loeffler, who runs the bitcoin trading platform Bakkt and co-owns the Atlanta Dream franchise of the Women's National Basketball Association. Kemp made the news official in a press conference Wednesday, WSB reports.

“I haven't spent my life trying to get to Washington. But here's what folks are going to find out about me: I'm a lifelong conservative,” Loeffler declared. “Pro-Second Amendment. Pro-military. Pro-wall. And pro-Trump,” she said.

“I make no apologies for my conservative values, and will proudly support President Trump's conservative judges.”

Loeffler will likely face a contentious Senate battle within the GOP, as Collins has said he is “strongly” considering running in next year’s special election regardless. That election will put every candidate on a single ballot regardless of party, meaning there is potential for Democrats to seize on a divided Republican electorate, particularly if Loeffler does not follow through on Wednesday’s declarations of conservative and pro-life values.