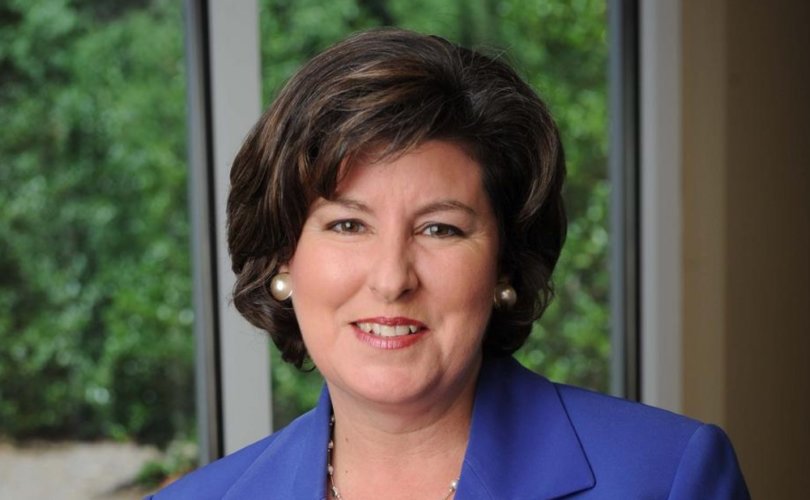 Handel, a Republican, and Ossoff, a Democrat, were the top two candidates in the initial special election in April 2017. Handel is the author of Planned Bullyhood, which details her battle with Planned Parenthood when she was senior vice president of public policy at the Susan G. Komen for the Cure.

In 2011, Handel advised the breast cancer charity to cut ties with the abortion giant over its numerous scandals. In early 2012, when it did, Planned Parenthood and its political allies viciously attacked Komen and forced it to reverse its new policy. Handel resigned and documented the abortion lobby's well-orchestrated public relations blitz in Planned Bullyhood: The Truth Behind the Headlines about the Planned Parenthood Funding Battle with Susan G. Komen for the Cure.

“We congratulate pro-life champion Karen Handel on her historic victory tonight. Although America’s largest abortion business, Planned Parenthood, spent six figures in support of her opponent Jon Ossoff, Karen’s record of courageous leadership won the day,” said SBA List president Marjorie Dannenfelser. “We are encouraged that the voters rejected Ossoff’s extreme pro-abortion agenda and are sending Karen Handel to Washington to stand up for women and children and get taxpayers out of the abortion business.”

Ossoff attacked Handel over the Komen/Planned Parenthood scandal during their first debate. Handel defended herself, pointing out she had been tasked with disengaging the Foundation from involvement with Planned Parenthood because the grants it had been giving the abortion giant “were not effective.”

“It doesn't matter how many times you say it, it does not make it true,” she said. “Planned Parenthood does not do mammograms. Period.”

Handel then detailed how she has spent her career fighting for women's health through anti-breast cancer advocacy and awareness.

“I am gonna be at the frontline of fighting for women,” she said. “I am not going to be lectured by you, John.”

Ossoff received criticism for not being able to vote for himself because he lives with his girlfriend outside the district.

Democrat Jon Ossoff, who wants to raise your taxes to the highest level and is weak on crime and security, doesn't even live in district.

This election was the most expensive in U.S. House history, with about $25 million being spent between both parties. Even though Handel was outspent by Ossoff over seven times (3 million to his 21 million, as of end of May), she still managed to pull off a big win.

Democrats and leftists around the country supported Ossoff, hoping his victory would show anti-Trump momentum. Media depicted the election as a barometer for the country's feelings toward Trump. It was often called a “referendum on Trump.”

Georgia 6 is a tough district to diagnose because its politics in presidential elections shifted a lot from 2012 to 2016. In 2012, the district went for Mitt Romney by 23 percentage points in an election that then-President Barack Obama won by 4 points nationally. That made it 27 points more Republican than the country as a whole. In 2016, by contrast, it chose Trump over Hillary Clinton by only 1.5 points in an election where Clinton won the popular vote by about 2 points nationally. Therefore, it was only 3 to 4 points more Republican than the national average.