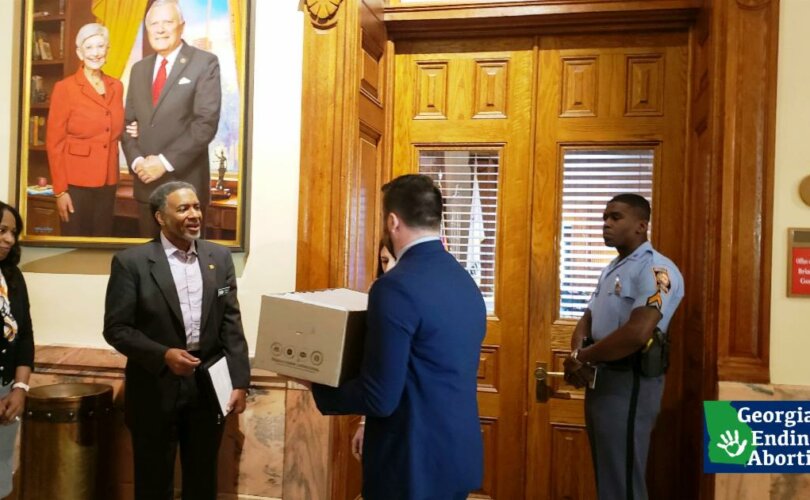 Personhood Amendment petitions are delivered to the office of Georgia Gov. Brian Kemp.Georgians Against Abortion

ATLANTA (LifeSiteNews) – A coalition of Georgia pro-life organizations presented Republican Gov. Brian Kemp a petition with 4,000 signatures asking him to call a special session of the legislature to amend the state constitution to recognize the personhood of unborn babies.

The Georgians Against Abortion’s petition was first announced in June by Georgia Right to Life (GRTL), days after the Supreme Court ruled that the U.S. Constitution does not guarantee a right to abortion. According to the petition, Article I, Section I of the Georgia Constitution would be amended to include the phrase “This state shall recognize the paramount right to life of all human beings as persons at any stage of development from fertilization to natural death.”

The petition also stresses that Republican primary voters in 2012 voted 66% in favor of an amendment to the Georgia Constitution granting a “paramount right to life” for all human life from conception to natural death, and that there is no guarantee of pro-life electoral victories in this year’s midterm elections.

In July, a federal court allowed Georgia’s heartbeat law, the Living Infants Fairness and Equality (LIFE) Act, to go into effect after the reversal of Roe v. Wade the previous month. The law, signed by Kemp in 2019, prohibits abortions after six weeks, the time when a baby’s heartbeat starts beating, and allows exceptions for rape, incest, and pregnancies deemed “medically futile.”

While the heartbeat law puts limits on abortions, chemical abortions are not touched by the law, according to a press release from GRTL, and count for a majority of abortions in the state. GRTL also maintains that Georgia’s regulating agencies seldom investigate, enforce, or prosecute violations of existing Georgia law. Further, while a provision in the law names the unborn as “natural persons,” this only applies to babies protected by the law’s prohibitions, according to Atlanta magazine.

“Pre-born children are still dying in the womb in Georgia because of flaws in the heartbeat law. Governor Kemp has the power to end this tragedy by taking the lead in adopting such an amendment,” said GRTL president Ricardo Davis.

Kemp faces reelection on November 8 in conjunction with the midterm elections. His Democratic opponent, Stacey Abrams, known for her repeated claims that Kemp’s election as governor in 2018 was stolen from her, will seek to repeal the heartbeat bill if elected, according to her campaign website.

Abrams has a track record of vocal support for abortion.

Last month, Abrams said in an interview that families worried about the rising cost of food and gas would not have to worry if they opted for abortion, saying “having children is why you’re worried about your price for gas, it’s why you’re concerned about how much food costs.”

“For women, this is not a reductive issue,” she said. “You can’t divorce being forced to carry an unwanted pregnancy from the economic realities of having a child.” Abrams faced backlash for her comments, with Twitter users calling them “evil” and “despicable.”

In August, Abrams appeared at a Georgia church and gave a sermon in favor of abortion, arguing that it was cruel to block access to it. “I was trained to read and understand the Bible, and I will tell you this,” Abrams said. “There is nothing about the decision to eliminate access to abortion care that is grounded in anything other than cruelty and meanness and danger in the state of Georgia. Nothing!” Abrams previously called the Georgia heartbeat law “evil.”

She also suggested that the fetal heartbeat detected by ultrasounds at six weeks was “manufactured” so that men can control women.

Davis, speaking about Abrams, said, “While candidate for Governor Stacey Abrams is calling for unrestricted abortion in Georgia — an endless slaughter of innocent life, we’re calling on Governor Kemp to live up to the proclamation he made when signing the LIFE Act that ‘all life is worthy of protection.’ The Supreme Court’s Dobbs opinions opened the way for Kemp to deliver on his proclamation statement.”

There are currently 13 abortion mills in Georgia. They have seen an increase in out-of-state women seeking abortions as a result of stricter abortion laws in neighboring states, such as Alabama and Mississippi, according to GRTL. Recent data from sidewalk counselors in the state suggests that an average of 195 abortions are performed every business day at Georgia’s abortion mills.

LifeSiteNews reached out to Kemp’s office for comment but has yet to receive a response.