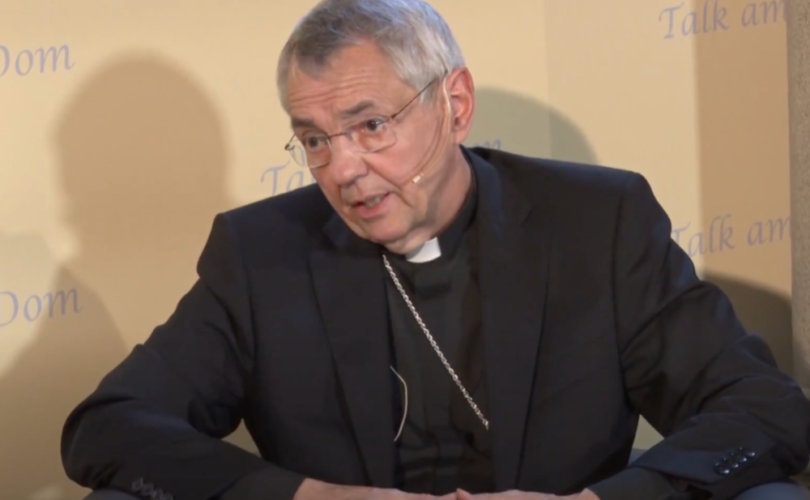 BAMBERG, Germany (LifeSiteNews) — Yet another German prelate has called for “married priests” and female deacons, echoing outspoken Cardinal Marx and other German prelates as Germany’s Synodal Path continues its divergence from Church teaching.

In a guest article for daily newspaper “Fuldaer Zeitung,” Archbishop Ludwig Schick of Bamberg advocated for fundamental changes to Catholic teaching on the priesthood, arguing for ordaining “viri probati” or “men who are tried and tested in marriage,” saying that to do so would prevent “clericalism … abuse of power.”

Schick defended his point, stating that celibacy “does not touch the priesthood in itself,” referencing the married clergy of both the Eastern Catholics and the Anglican Ordinariates to support his argument.

Schick also expressed hope that women would be ordained deacons, writing that “it is just as important for the reform of the Church that women take on even more leadership offices — also in pastoral ministries.”

Only days before, the 72-year-old prelate had outlined his desired “reform” on BR television. “I am committed to women having a large, equal role in the church,” declared Schick. “We will not remain a church in which women do not have equal rights.”

When asked if women should be ordained priests, Schick stated that there was little against it, but that the current requirement was for a male-only priesthood. BR reported that Schick “did not know whether that would remain the case.”

While Schick was aggrieved that such changes had not yet occurred, he was hopeful they would soon take place. “I have the impression that at the moment things are moving forward at all levels. I think there will then also be a council or a synod in Rome,” he added.

The archbishop’s comments echo those made by Cardinal Reinhard Marx, Archbishop of Munich and Freising, along with Bishop Georg Bätzing, the head of the German Bishops’ Conference, and Archbishop Heiner Koch of Berlin. Speaking just before a meeting as part of Germany’s ongoing Synodal Path, Cardinal Marx declared that “it would be better for everyone to create the possibility of celibate and married priests.”

The dissident cardinal, whose resignation over mishandling of sex abuse cases was refused by Pope Francis last year, was subsequently supported by Bätzing. “I can’t see how marriage and the priesthood aren’t a common enrichment for this priestly service and for the common life of spouses,” he said, welcoming Marx’s remarks.

Some days prior, Marx had publicly rejected Church teaching on homosexuality, when he said that homosexuality was not a hindrance on becoming a priest. Should a man declare his “sexual inclination … then that is to be respected and then this is not a restriction on his ability of becoming a priest,” Marx stated. “That is my position and we have to stand up for it.”

Yet clear Church teaching on homosexuality and LGBT issues appears to have been ignored by participants in Germany’s Synodal Path and Germany’s Bishops’ Conference, after an overwhelming majority of participants voted early February to approve documents calling for blessing of same-sex couples and the ordination of women.

While the final version of the documents will be approved by vote in the fall, the preliminary votes signaled a seismic move away from consistent Church teaching prohibiting female ordination and blessings of same-sex relationships.

Launched by the German bishops in 2019, the Synodal Path advocates fundamental change to Catholic teaching on the priesthood, LGBT issues, and the role of women in the Church. It has been repeatedly condemned by a number of high-ranking prelates, including Cardinal Raymond Burke and Cardinal Rainer Maria Woelki, both of whom referenced a “schism” as a result of the Synodal Path.

Indeed, since the Vatican’s March 2021 note re-iterating Church teaching against same-sex blessings, a number of German priests and bishops have voiced their opposition to the ruling, with some 50 Catholic parishes holding a special same-sex blessing service on May 10.

Cardinal Gerhard Müller, former Prefect of the Congregation for the Doctrine of the Faith, has previously condemned the Synodal Path as advocating change contrary to the doctrines of the Church: “The so-called Synodal Path of the German dioceses has no authority whatsoever in order to introduce a teaching and practice in questions of Faith and Morals that stand in contradiction to the binding doctrine of the Catholic Church.”

Most recently, the president of the Polish Bishops’ Conference Bishop Stanisław Gądecki also urged Bishop Bätzing not to “yield to the pressures of the world or to the patterns of the dominant culture,” and described the promotion of female ordination and same-sex blessing as “the repetition of worn-out slogans.”