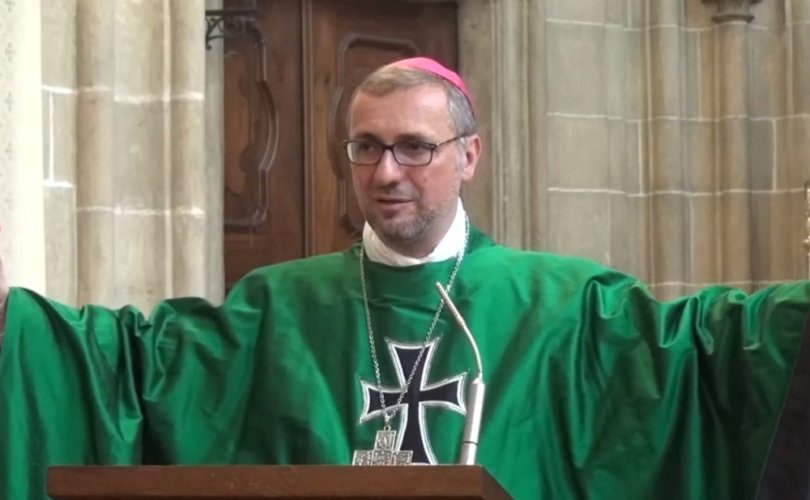 “You have to be allowed to think and discuss the issues,” he said on Wednesday. Heße was appointed archbishop of Hamburg by Pope Francis in 2015.

“The discussion is still there, it is alive, and it cannot be stifled by a paper,” Heße argued, referring to Pope John Paul II’s 1994 Apostolic Letter Ordinatio Sacerdotalis.

The Polish pope, who was canonized by Pope Francis in 2014, wrote a powerful document explaining why only men can become priests, referring to several previous statements by popes that explained the issue in more detail.

“Wherefore, in order that all doubt may be removed regarding a matter of great importance, a matter which pertains to the Church’s divine constitution itself, in virtue of my ministry of confirming the brethren (cf. Lk. 22:32) I declare that the Church has no authority whatsoever to confer priestly ordination on women and that this judgment is to be definitively held by all the Church's faithful,” John Paul concluded.

Heße, however, said, “The historical perspective is one thing — but it’s not everything.”

Based on reports of his remarks, Heße did not acknowledge that what he referred to as “historical perspective” is properly called “sacred tradition,” and as such is part of revelation.

The Second Vatican Council explained that “there exists a close connection and communication between sacred tradition and Sacred Scripture. For both of them, flowing from the same divine wellspring, in a certain way merge into a unity and tend toward the same end.”

“For Sacred Scripture is the word of God inasmuch as it is consigned to writing under the inspiration of the divine Spirit, while sacred tradition takes the word of God entrusted by Christ the Lord and the Holy Spirit to the Apostles, and hands it on to their successors in its full purity, so that led by the light of the Spirit of truth, they may in proclaiming it preserve this word of God faithfully, explain it, and make it more widely known,” the Council fathers wrote in Dei Verbum.

“Consequently it is not from Sacred Scripture alone that the Church draws her certainty about everything which has been revealed. Therefore both sacred tradition and Sacred Scripture are to be accepted and venerated with the same sense of loyalty and reverence.”

Archbishop Heße pointed out that modern theologians are asking whether in the incarnation of Christ the decisive thing was the Second Person of the Trinity becoming a man or becoming a person.

The original report by KNA (the official Catholic news agency, owned by the bishops), without directly quoting the archbishop, indeed spoke of “Personwerden” (“becoming a person”). As faithful Catholics know, Christ did not become a human person; he assumed human nature, consisting of body and soul. There was no duality of persons in Jesus Christ — only the Second Person of the Trinity.

According to the Catechism of the Catholic Church, “[t]he Nestorian heresy regarded Christ as a human person joined to the divine person of God’s Son.”

Heße expressed his hope that the “synodal path” of the Church in Germany would arrive at results on the question of the role of women in the Church that can then be presented in the Vatican. “But I also have the realistic notion that this will not answer or solve the questions,” he admitted.

Just days ago, a German law professor appointed by Pope Francis to the high-level group overseeing the Vatican’s finances signaled her openness to having female priests.

“In my view, a great deal is possible in this area,” Charlotte Kreuter-Kirchhof, a member of the Vatican’s Council for the Economy, who was appointed to the position earlier this month, said in an interview last week with the German bishops’ news website katholisch.de. “But there are controversial debates going on in the Church at the moment.”

Cardinal Reinhard Marx, a member of Pope Francis’s small group of cardinal advisers, said in July that arguments used against female ordination decades ago are getting weaker over time. The archbishop of Munich and Freising, as well as former president of the German Bishops’ Conference, claimed that the question of female ordination still needs to be discussed, even though Pope John Paul II definitively said that only men can be validly ordained.