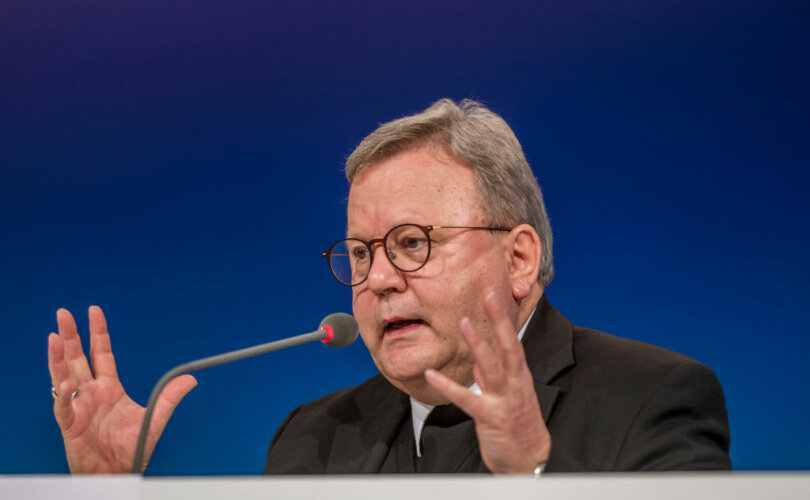 Bishop Franz-Josef Bode speaks to the media on the opening day of a congress of the "Synodal Way" on February 3, 2022, in Frankfurt, GermanyPhoto by Thomas Lohnes/Getty Images

The prelate also advocated for opening “the priesthood to married men, including those with a civil profession.”

Bode made the comments in a parish meeting in Osterclappeln, a village in his diocese of Osnabrück, according to a report by Katholische Nachrichtenagentur (KNA).

In September, Bode was accused in an extensive report, published in September, of covering up sexual abuse and promoting abusive priests but he refused to resign.

READ: Key leader in German Bishops Conference refuses to resign after he was named in abuse report

Bode, who is the vice president of the German bishops’ conference (DBK) and of the heterodox “Synodal Way,” defended his decision to remain in office during the assembly on Sunday.

The German prelate acknowledged that the trust between himself and many of his employees was broken, and it would “not be easy to heal this.” However, he stressed that he “could be accused of moral, but not legal misconduct.”

— Article continues below Petition —
PETITION: We won't give any money to liberal bishops who attack the Faith
Show Petition Text
11601 have signed the petition.
Let's get to 12500!
Thank you for signing this petition!
Add your signature:
Show Petition Text

Instead of resigning, Bode used the occasion to promote the Synodal Way, a long-term project of the DBK which has backed the ordination of women to the priesthood and admittance of divorced and “remarried” Catholics to Holy Communion, among other anti-Catholic positions. He defended the Synodal Way by claiming that it would help to clarify the systematic background behind abuses of power.

For this reason, the 71-year-old bishop said he wants to strengthen the role of women not only in church administration but also in pastoral ministry and to entrust them with the administration of baptism.

The project of training laypeople, “especially full-time and voluntary women in the parishes,” to perform baptisms is set to start on Easter next year. These so-called lay ministers could start to administer baptisms by 2025, according to Bode.

At the same time, he called for the priesthood to be opened to married men, including those with a civil profession.

This is not the first time that a German bishop assigned laypeople, especially women, to administer baptism. Bishop Franz-Josef Overbeck of the diocese of Essen authorized 17 women to confer baptism in his diocese in March 2022, and 13 more in October of this year.

While Overbeck justified his decision by citing an alleged “lack of priests,” Bode said he “wants to strengthen the role of women.”

The parish meeting initially convened as a response and, indeed, protest in the village after the name of a priest accused of sexual abuse, who had been working there for many years, became known, despite the interim report on sexual abuse in the diocese not explicitly naming the alleged abuser.

Full-time and volunteer staff members criticized the diocesan leadership for not informing them that the cleric had been accused of abuse. Bode defended the diocese’s secrecy, stating that there had been a dilemma between the protection of the accused’s privacy and the public’s interest in transparency.

The priest in question, who has been accused of “having a relationship” with a female minor in the 1980s, was banned from celebrating public masses or assuming other ecclesiastical duties in September of this year.

Bode has been in high-level positions in the Catholic Church in Germany for many years. He became Bishop of Osnabrück in 1995 and the following year took on important tasks in the DBK. From 1996–2010 he was chairman of the DBK Youth Commission, colloquially known as the “youth bishop.” He then became chairman of the DBK Pastoral Commission and its sub-commission “Women in Church and Society.”