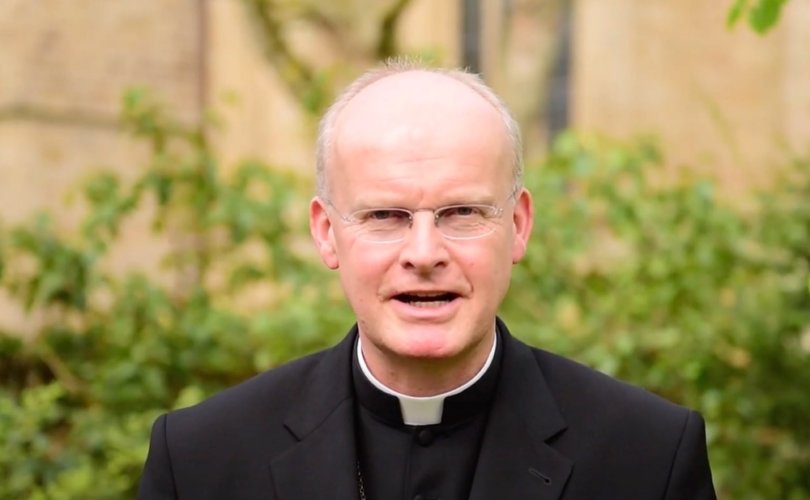 Bishop Franz-Josef Overbeck of the Diocese of Essen, Germany, one of the most radical promoters of the highly controversial “Synodal Path,” commissioned 18 lay pastoral ministers, including 17 women, to administer the sacrament of baptism in their respective parishes for a period of three years.

In Saturday’s sermon, Overbeck explained that baptism was originally administered by bishops only, but that the faculty was passed on to priests and deacons over time.

He argued that by commissioning women to administer baptism, the diocese of Essen was responding “to a pastorally difficult situation,” namely a lack of priests in the diocese.

Theresa Kohlmeyer, head of the department of Faith, Liturgy and Culture in the diocese, and in charge of a four-day training course aimed at preparing the 18 pastoral counselors for their new task, echoed the bishop’s words and argued that “the Church has always responded to external circumstances over the past 2000 years.”

“Today, on the one hand, we have fewer priests than in the past, but on the other hand, there is also a great need on the part of baptismal families for a more personalized accompaniment,” said Kohlmeyer. “We are responding to this situation in the Diocese of Essen by now also involving other pastors in the practice of baptism.”

The diocese of Essen, the smallest in Germany in terms of area, is home to some 724,000 Catholics spread out into 40 parishes.

Eleven of these parishes had initially applied to commission lay pastoral ministers to perform baptisms, but Kohlmeyer expects that even more ministers will be given this faculty later this year due to a shortage of priests.

“In view of the numerous parishes that have already also applied to allow additional pastoral workers to baptize, we will commission additional baptismal ministers this year,” Kohlmeyer said.

It is in fact possible for laypeople to validly administer baptism, though this is usually reserved for cases of necessity or emergency.

According to can. 861 of the Code of Canon Law, “When an ordinary minister is absent or impeded, a catechist or another person designated for this function by the local ordinary, or in a case of necessity any person with the right intention, confers baptism licitly.”

Baptism can become invalid if the minister does not have the right intentions, uses the wrong words, or a liquid that isn’t water. Cases of invalid baptisms have multiplied recently, some even involving priests with many years of training as opposed to four days, as in the case of the lay ministers in Essen.

Though Overbeck and Kohlmeyer cited a shortage of priest as reason to allow lay ministers, particularly women, to administer the sacrament of baptism, this is also consistent with Overbeck’s view on women priests.

Overbeck is well-known for his liberal opinions on this and other issues.

In October 2019, he said he was in favor of the ordination of women, one of the main reforms that the promoters of the Synodal Path in Germany are hoping to bring about.

He also hinted at the possibility for some priests to be dispensed from clerical celibacy and be able to marry.

“The old days are really over,” Overbeck stated in an interview with German radio at the time.

He has also expressed other views in line with the Synodal Path, such as the idea according to which the Church should change its teaching on homosexuality.

The Synodal Path is a highly controversial movement within the German Catholic Church which was launched by the bishops in 2019. The movement is bringing together Germany’s bishops and laypeople with a view to change the Church’s teachings on priestly celibacy, the role of women, and sexual morality.

The Synodal Assembly consists of the bishops as well as members of the powerful lay Central Committee of German Catholics (ZdK), and some other members. Only a small minority of bishops and other participants defends traditional Catholic teaching.

The movement has been condemned by a number of high-ranking church officials. Some argue that Synodal Path poses a real threat of schism in the German Church.